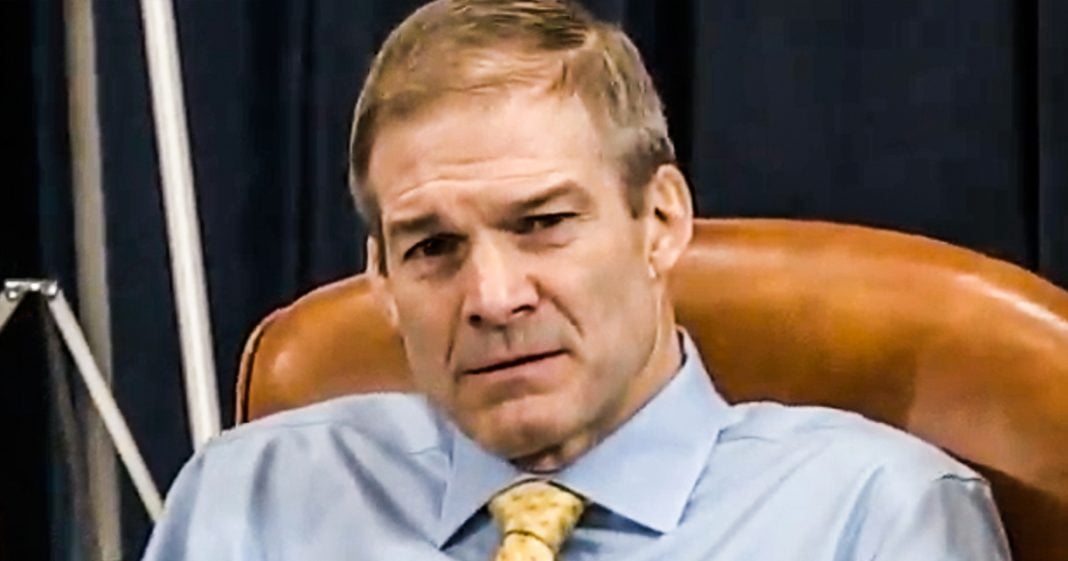 A farmer in Ohio who has been financially harmed by Donald Trump’s trade war has decided that he’s had enough of the Republican Party and he’s going to challenge Republican Jim Jordan for his House seat. He will be running as an independent, but he might be able to siphon away enough votes to get Jim Jordan out of the House for good. Ring of Fire’s Farron Cousins explains what’s happening.

Republican representative Jim Jordan has found himself a new challenger for his seat in 2020. Now, this man is not somebody who’s challenging him as another member of the Republican party. He’s not going to primary Jim Jordan. What he’s going to do is run as an independent against Jim Jordan, and here’s the thing, this isn’t just some yahoo off the streets saying, you know what, I’m sick of Jim Jordan. I’m sick of everybody. I’m going to run for president. No, or excuse me, house of representatives. This is a man in Ohio by the name of Chris Gibbs, and Mr. Gibbs is a farmer, a soybean farmer, and he’s a farmer who has been financially devastated by Donald Trump’s trade war. Also happens to be a soybean farmer hurt by Donald Trump’s trade war, who up until not that long ago, was a Trump supporter and the president of his local Republican group. But he is now, according to a lengthy, a writeup in Yahoo news has now renounced the Republican party, resigned as president of that little local chapter of the GOP and no longer supports the president or the Republican party.

Now, he’s not a Democrat. As I said, he is an independent, but he is a victim too. He is a victim of Republican policies and he’s tired of being a victim and so he wants to run, he has formed an exploratory committee to run an independent bid for Jim Jordan’s house seat. A couple quotes from him and from this Yahoo news article, some that I agree with, some that I don’t agree with. He says the discourse that we have in the United States now between the parties and in Washington in particular, someone had to stand up. Somebody has to stand up and represent real people and the only way I thought I could do that is as an independent voice. Now I do agree that we need more regular people, more everyday people running for Congress. That is exactly what this country needs. I disagree that we don’t have anybody doing that already because we do. We do. We, we have AOC, we have Rashida Tlaib. We have Ayanna Pressley, you know we, we have Bernie Sanders, we have Ro Khanna. These are people who are speaking up for regular people. There’s not enough of them though, and that’s why I do think we need more. We need all of them to be this way.

So I agree with him on that, but I also disagree that we don’t have anybody doing it. The voices aren’t many, but they’re there. He continues, the Trump administration’s failed on China, hands down. We lost 30%, one third of our soybean sales right off the bat, because of the trade war and there is no guarantee that’s going to come back and he’s right about that. Because they have lost so much money. They have lost such a big market and because Donald Trump says this trade war could trade war could continue indefinitely. They don’t know if it’s coming back. They don’t know if it’s going to be in six months. They don’t know if it’s going to be in six years. They don’t know if it’s going to be ever and somebody has to stand up to put an end to this. He goes on to talk about the fact that the Republicans simply aren’t standing up for them. They’re not doing their jobs. They’re not out there actually advocating for the average American people because the Republican party doesn’t care about the average American people. And he’s sick of it. And here’s the thing, I may not agree with Chris Gibbs politically on most issues, but what he’s doing is the right thing. And not just because an independent bid from a conservative leaning person could be a spoiler for Jim Jordan and get him out of the house for good.

That’s, that’s a positive. But more people need to follow this lead. And we have seen so many people do this over the last few months, average everyday working class Americans saying, I’m have had it. I’m done with this. People aren’t representing us. I’m running for Congress. We need more of that. We need more of it on the left and the right and the independents. It’s not going to hurt anything. It takes a lot of time and it takes a lot of effort and it takes a lot of dedication. Something a lot of people in this country simply don’t have the offer. And that’s not an attack on them. It’s the truth. We don’t have the time. We can’t afford to do these kinds of things. So anyone who does say, I’m going to make that personal sacrifice and stand up and do it, whether they’re on the left, right or center, we need to applaud them because this is a big step. It is a big commitment and it’s a big financial obligation for these people. They’re putting their life, they’re betting their life on these runs, and at the very least, we need to congratulate them for taking that big step that some of us have always been a little too scared to take.