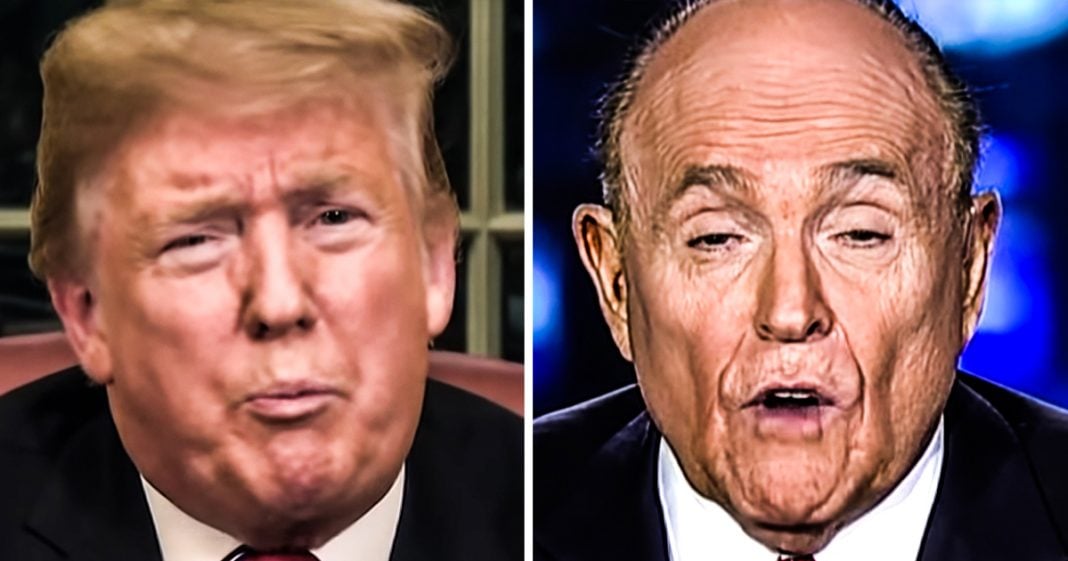 Donald Trump has finally listened to those closest to him, and several Republicans have told Vanity Fair that Giuliani is in a “timeout” from being allowed to appear on Fox News. This is the first smart move the President has made, as every time Giuliani goes on TV he just seems to make things worse for the President. Ring of Fire’s Farron Cousins discusses this.

It appears that Donald Trump has finally done something smart in his administration. And that smart thing was to listen to people who are only slightly smarter than he is, but who understand that Rudy Giuliani is a massive liability for the president. According to vanity fair, three different Republicans had been begging Donald Trump to get Rudy Giuliani off of TV. And then after begging and pleading with the president came Giuliani’s appearance on Fox news on November 23rd where he, you know, talked about the insurance policy he had in case Donald Trump threw him under the bus. And according to the Republicans who spoke to vanity fair, Trump was pissed. That was the words they use. Trump was pissed. And at that point he said, Rudy Giuliani go to timeout. No more Fox news for you. And yes, in the week and a half, two weeks since then, Rudy Giuliani has repeatedly declined requests for interviews from producers at Fox news. That has been confirmed by vanity fair.

Giuliani has finally started saying, no, I can’t. I can’t go play with you. Daddy says I’m not allowed to leave, I’m still in a timeout. So that’s what’s happening with Rudy Giuliani. And I got to say, as much as I love Giuliani going out there and implicating Donald Trump, and more and more and more and more and more crimes, this is a smart move by the president. Right? Giuliani has got his own legal problems to worry about, but he doesn’t appear to be too worried about them. Instead, he wants to go out there and say why the president did nothing wrong. But every time he says the president did nothing wrong, he tells us more wrong things the president did, because he’s not a good lawyer. He’s not a smart human, but that is who he is and that’s what he’s going to keep doing. So kudos to Donald Trump for finally listening to people who have a little bit more brain than you when they say that, get Rudy off the TV before he sinks your entire administration.

Now here’s the thing. Trump was pissed as they said. Those are their words, Trump was pissed. Giuliani’s in his timeout, but Giuliani’s only gonna stay there for so long. Eventually Donald Trump’s gonna turn his back because he’s got other things to do and the second he does Giuliani’s going to get, get up out of that timeout corner and go right back on Fox news. This isn’t going to end well for either one of them. The only question is going to be, which one is going to turn on the other? Is Donald Trump going to get the upper hand to be able to turn on Rudy Giuliani saying he’s corrupt and he’s fired as my attorney? Or is Giuliani going to be the one to say, listen, Donald Trump is treating me so poorly? I’ve got my own legal problems.

Here’s everything you need to know about what the president and I did. Give me a little bit of leniency. Giuliani knows all about that as a former prosecutor, right? He knows about plea deals. He knows about getting a little bit shaved off your sentence because you cooperate in other investigations. Trump doesn’t, he’s never been on that side of the wall before, and Giuliani does know how to navigate it. So I’m willing to bet Giuliani’s going to be the one that flips on Donald Trump, but, it’s a big but, only if the president continues to mistreat him. If they finally come to some kind of mutual understanding, if they’re still buddy-buddy, after all of this, then neither is going to flip on the other.