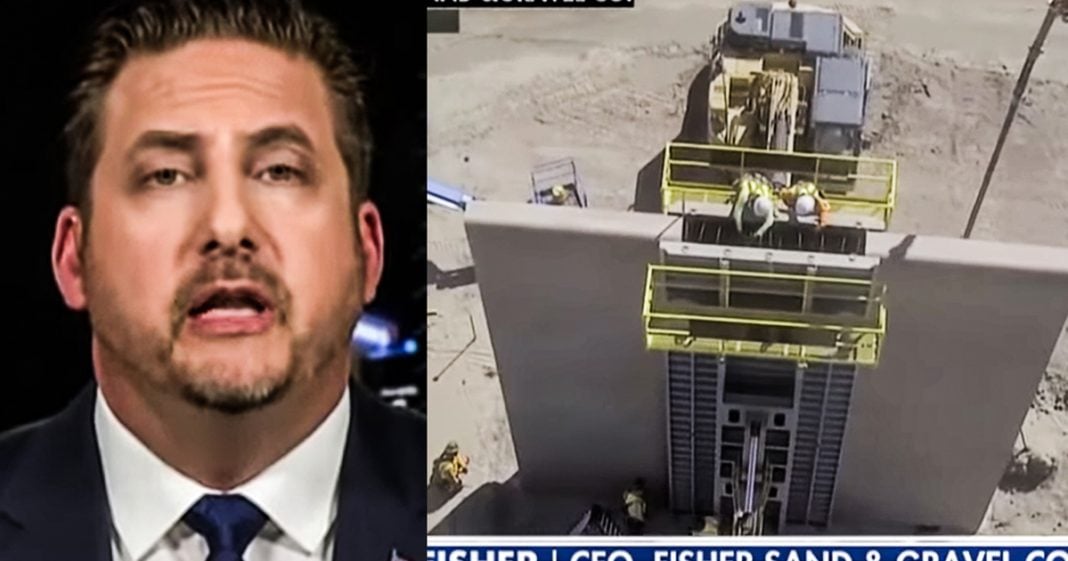 Donald Trump can’t function without Fox News, and that seems to be where he’s getting all of his ideas. So when it came time to hand out a $400 million contract from the Department of Defense to build his border wall, he turned to a contractor that he had regularly watched on Fox, Tommy Fisher of Fisher Sand and Gravel Co. His administration tried to talk him out of it, as Fisher is a big Republican donor with a shoddy record as a contractor, but Trump insisted. Ring of Fire’s Farron Cousins discusses this.

*This transcript was generated by a third-party transcription software company, so please excuse any typos.
Donald Trump has awarded a man by the name of Tommy Fisher, a $400 million contract to build sections of his border wall down in the state of Arizona. So who is Tommy Fisher, right? Well, Tommy Fisher happens to be the owner, CEO of Fisher sand and gravel company, Fisher sand and gravel. I don’t hear the word fence or border wall in that title, but sure. Fisher sand and gravel make a big sand and gravel wall. So where did he find Mr. Fisher? Well, there’s two places he seen Mr. Fisher before. One because he’s given thousands of dollars to Republicans over the years. And he was a, the guest of Republican Senator Kevin Kramer at the 2018 state of the union address. So he may have seen him there, but no, the main place Donald Trump has seen Mr. Fisher is on Fox news and Donald Trump has seen Mr. Fisher go on Fox news all the time. Fisher loves to go on there and talk about how he and his company could build the border wall faster and cheaper than anybody else in this country. That’s what Mr. Fisher has been promoting on Fox news for months. And finally, Donald Trump said, you know what? I have seen enough. I am sold in this guy’s little three minute appearances on Fox news. Give him $400 million of taxpayer money to build my stupid vanity project along the Southern border. Now, to their credit, the us department of defense came up and said, that’s a really dumb idea, mr president. Uh, the proposal that he has put forward is inadequate. It does not meet the criteria that we need for someone to build the border wall. They have been fined more than a million dollars for environmental, um, rural braking and for tax violations. Their former co-owner is in jail for tax fraud, or he was in jail for 37 months for tax fraud. Maybe we could literally pick anyone else in this country other than this group that is clearly not good at what they do and really bad at following the law, but not good at what you do and not being able to follow. The law is the MO of the Trump administration. So Trump told the department of defense, I don’t care what you say. I’ve seen this guy on Fox news. I’m going to get a good deal on my wall. You’re going to give him $400 million and that’s where we’re at today. This is insanity folks and we can all go ahead and predict what’s going to happen here. This contractor, Tommy Fisher, I guarantee you within the next four years there is going to be a massive department of justice lawsuit, a fraud against the government lawsuit against Fisher sand and gravel because if he actually does go down there and he is able to somehow build this border wall at a quarter of the cost that everybody else says it would cost, he’s going to cut some corners. He’s going to do some shotty work. That border wall is not going to stand and we’re going to find out most likely because we see this all the time with government contractors, they cut corners to put more money in their pockets and left the federal government paying for something that doesn’t do what they thought it was going to do. They’ll eventually get sued for it after being investigated for it. But I can promise you, let’s revisit this in four years and I guarantee you everything I just predicted will have come to fruition.