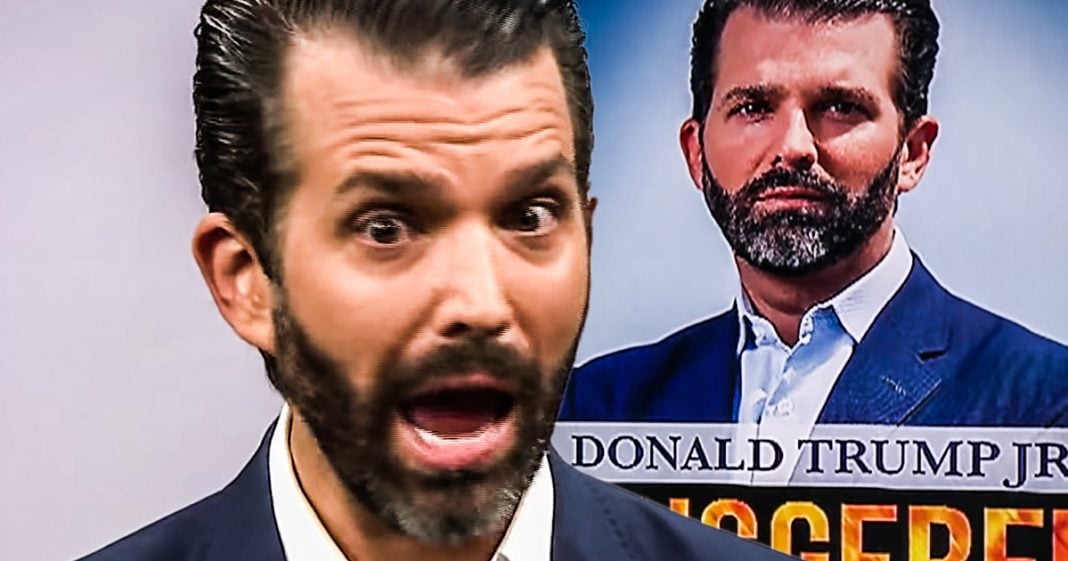 Donald Trump, Jr. can thank more than just his father’s campaign for getting him to the top of the New York Time’s bestseller list, as new reports have indicated that at least 9 conservative groups have been bulk-buying copies of his book. This is typical for conservative authors, and is one of the reasons why they always seem to have bestsellers. But when you look at the numbers closely, you’ll see that it is all smoke and mirrors. Ring of Fire’s Farron Cousins discusses this.

*This transcript was generated by a third-party transcription software company, so please excuse any typos.
According to a new New York times report, at least nine different conservative organizations and uh, I guess high profile people in the Republican party, some politicians, some former politicians, whatever it is. But at least nine different ones have been caught bulk buying copies of Donald Trump Jr’s new book triggered. And those bulk buying procedures are what helped buy his way to the number one slot on the New York times bestseller list a slot that, by the way, he only held for a couple of weeks before getting knocked down. So what does this tell us? Right? I mean the New York times is the one who puts out that list of the best sellers and then the New York times comes out now and tells us, Oh yeah. A lot of it was because you had all these groups, including the Republican national committee, including turning point USA, including the actual Trump campaign itself, including the campaign of a Republican house, minority leader, Kevin McCarthy. They’re all buying tons of copies of the books and using them to either resell themselves or give them out at events or a little bit of both. You donate a certain amount of money to a campaign and they’ll send you a copy of the book. But that is the biggest reason why Donald Trump Jr’s book triggered made it to the top of that New York times bestseller list. And as we have discussed in the past, it only takes about $250,000 worth of book sales to get on to the bestsellers list. Now obviously it’s going to take considerably larger amounts than that to make it to number one, but that’s also why Trump jr didn’t stay at number one for very long, just two maybe three weeks, maybe not even two. The reason is because all of those bulk purchases were made when the book was immediately released or they were preorders, which means they go through the day the book is released, so they only count for that first week. The fact that the book fell from the number one spot so quickly indicates that those sales did not continue among the average public. You know the, the book buyers, they weren’t buying it, but all those bulk orders went in first day and pushed him up to number one. That’s why that happened. There is nothing illegal about this folks, so don’t worry about that. Donald Trump jr is in no trouble here. It’s technically not even unethical. It’s dishonest. Sure, but that’s actually the fault of the New York times best seller list. If, if they don’t want people doing this, buying their way to the top of the list and change the way you count it. Don’t count bulk sales count individual people walking into a bookstore and making the conscious choice, yes, I want this thing. That’s what should count because this something that’s been happening for years and years and years and years, probably long before Donald Trump jr even knew how to read, so at least 10 years. But here’s the thing, conservative groups do this all the time. How do you think Ann Coulter becomes such a good bestseller all the time? It’s not because she’s a good writer. I’ve only picked up a couple of Ann Coulter’s books in the past because sometimes a publisher send them here and uh, I’ve never read one. But what I do, anytime an Ann Coulter book comes in, I open it up and I flip to the back to see the sources. You know the citations, I’ve never seen it. I’ve never seen a list of citations in any Ann Coulter book that has come my way. I flip through the pages, there’s nothing listed at the bottom. Meanwhile, we get all these progressive books in here and some of them have appendixes that are actually longer than the dang book itself. So how does she make it to the best seller list? While you have all these groups out there, she goes and does these events where the venue will have to buy, you know, a thousand copies of the book so they can sell it at the event. That’s what happens. The whole thing is a sham. The whole thing is a scam. And Republicans because they are so well financed with all of these individual little groups out there being funded by these foundations that are funded by the millionaires and billionaires flush with cash to purchase these books, to put any conservative author they choose at the top of that bestseller list. Donald Trump jr is this just the latest in a long line of these conservatives who have had their wealthy friends buy their way to the top of the list.