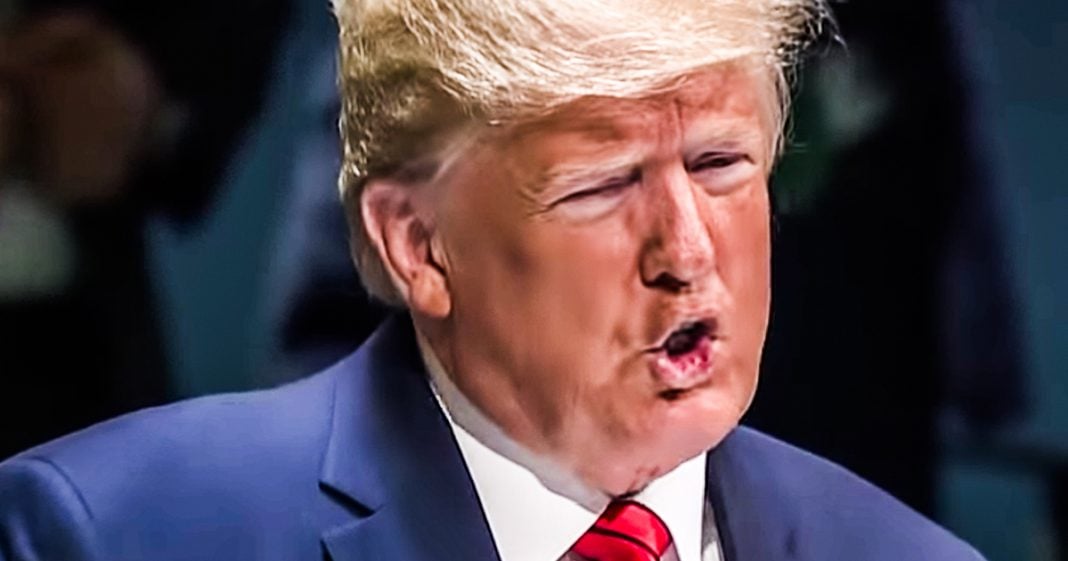 It didn’t take long for foreign governments to figure out how Donald Trump works, and some of them are hoping that he pulls out a victory in the 2020 election because he’s so very easy to read. One of those countries is China, who has taken advantage of him at every step of the trade negotiations without losing a beat. Ring of Fire’s Farron Cousins explains what’s at stake if Trump wins again in 2020.

*This transcript was generated by a third-party transcription software company, so please excuse any typos.
An interesting new report came out from the Washington post about a week ago that says that Chinese officials are actually hoping that Donald Trump will win the 2020 presidential election. That’s right. Politicians in China are pulling to keep America great in 2020 now, this may seem weird, obviously Donald Trump has enacted the trade war that’s been going on for, you know, God close to two years at this point. No end in sight, severely hurting the United States, only now just slightly starting to hurt China, which really not even enough to to matter to them at this point. But in the future it’s probably going to, so why on earth would they want this crazy man to come back as president of the United States? The answer is simple and it’s something we have discussed at length numerous times, and that is they know that Trump’s easy to read. In fact, that’s literally what they said. Here’s a quote from the Washington post in anonymous Chinese, a political official who didn’t want to give their name because they wanted to be able to speak openly about this, but they said Trump is a businessman. We can just pay him money and the problems will be solved. As long as we have money, we can buy him. That’s the reason why we prefer him to Democrats. He is easy to read. We want Trump to be reelected. We would be glad to see that happen and that’s what we’ve been saying since day one. You want to get on Donald Trump’s good side. It doesn’t matter if you’re a politician, if you’re a businessman, if you’re an organization or a foreign leader, you want to be on his good side. Give him a little bit of money. Book a couple of hotel rooms at one of his properties. Have an event at one of his properties. Heck at this point, all you have to do is praise him on Twitter and you’re on his good side. And China understands that they can ride out these trade Wars cause it’s hurting us a heck of a lot more than it’s hurting them. Not to mention the fact that even if it hurts their people, they don’t care about that. And that’s another reason they want Donald Trump to be president again, because his only concern is dollars and cents. Whereas if you had a Democrat in there, they’d probably want to talk about all the egregious human rights abuses going on over in China. And they don’t want that. No, no, no. Trump has never expressed any concern about what’s actually happening to Chinese people. He actually praised a few days ago. The fact that Hey, you’re celebrating your 70th year under communist rule. Good for you. He doesn’t care about the people. He cares about the money. So China knows that they could do whatever they want, commit all these human rights abuses, continue to lock up Muslims in the country. And Trump won’t say a word. They don’t have to worry about the United States getting mad about that whatsoever. As long as Trump is in office and as long as they keep acting like they want to end the trade war and then not ending the trade war with them, they’re fine. They also understand that they have the upper hand in negotiations with the trade war because as we had reported over the summer, they were literally in the middle of talks to end the trade war. When Donald Trump, who was back here in the United States tweeted something out about how we were going to stick it to China. They saw it and they stood up, ended the talk and walked out of the meeting and ever since then we have not had formal talks with them. They can read Trump’s so can North Korea, so can Russia, so can Saudi Arabia, so can Iran so can every other country on this planet and the bad ones. The bad guys out there. The ones who are committing these human rights abuses in their own countries, they’re the ones pulling the hardest for a Trump victory in 2020.