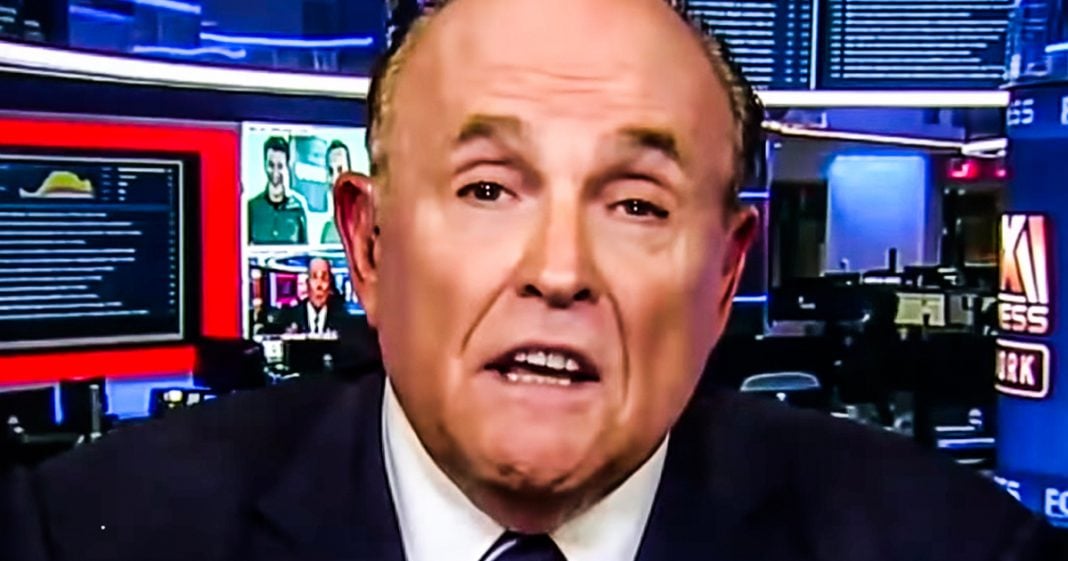 Rudy Giuliani is REALLY trying to make sure that no one can ever take the title of “Worst Lawyer Ever” from him. On Thursday, he sent out a tweet admitting that Trump was trying to get Ukraine to investigate Joe Biden, but Giuliani says that it was perfectly fine to do so because he has a Constitutional right to do so. Someone needs to explain to Rudy that this isn’t the issue. Ring of Fire’s Farron Cousins discusses this.

Well, the Trump administration may have borrowed Rudy Giuliani from going on Fox news, so he doesn’t embarrass the president, but what they didn’t do was take away his phone so that he couldn’t get on Twitter and admit that, yeah, Donald Trump did the thing everybody thinks he did, which is what Giuliani did on Thursday. Oh, and mind you, Giuliani did this from the Ukraine, by the way, where he’s over there still trying to do the things that he’s been accused of doing that he’s under criminal investigation because they think he did it. He’s actually over there doing it right now, but here’s what Giuliani tweeted on Thursday. He said, presidential legal obligations, 101 article two section three of the U S constitution obligates the president to investigate and ask for investigations of corruption in countries we provide funds to whoever heard of a president being impeached for carrying out his constitutional mandate and that ladies and gentlemen, is Rudy Giuliani admitting that yeah, Trump did withhold the funds and he withheld the funds so that they would investigate Joe Biden and sure constitution may say that we have an obligation to make other countries investigate perceived corruption, but what we don’t have is a constitutional right to use extortion to get them to do it. And that’s what Rudy Giuliani doesn’t seem to understand.

It’s not the fact that Donald Trump said, Hey, can you invest in week? We got some reports here. Bad things may have happened. Could you look into this for us? Thanks. We appreciate it. No, no, no, no, no. Rudy, it’s the, but I need you to do us a favor. Right? The little extortion part, which by the way, all of the funds that were appropriated for Ukraine, for the aid, they haven’t even all been released yet. There’s still like 35 million, almost 10% of the money still being withheld by the U S government, even as we’re in this impeachment hearing. But Giuliani admitted right there. He’s like, yeah, he did it, but he’s totally legally allowed to do it. Yes, he is legally allowed to go out there to any country on this planet and say, investigate corruption. We have claims of corruption in your country here. They are, please go investigate. Thank you. We give you money, you investigate. We don’t give you money to investigate. But as the constitution says, if we give you aid, you know, we can, uh, say you should investigate. But the constitution doesn’t say we can withhold this aid if you don’t investigate, you see Rudy, that’s where that little gray area exists.

Constitution says, if we give you money, we can ask you to do a thing. It doesn’t say we can withhold the funds if you don’t do the thing we’re asking you to do. And that’s where the president got in trouble. And that’s where you as the worst attorney in the United States of America just screwed up big time. The president did it. Okay. Let’s not even pretend anymore. Like it’s an allegation or accused. No, the dude did it. He admitted he did it. Even in the redacted heavily edited phone transcript that he released. He did it. And luckily we have Giuliani coming out here every couple of days to remind everyone in this country that Donald Trump did it.