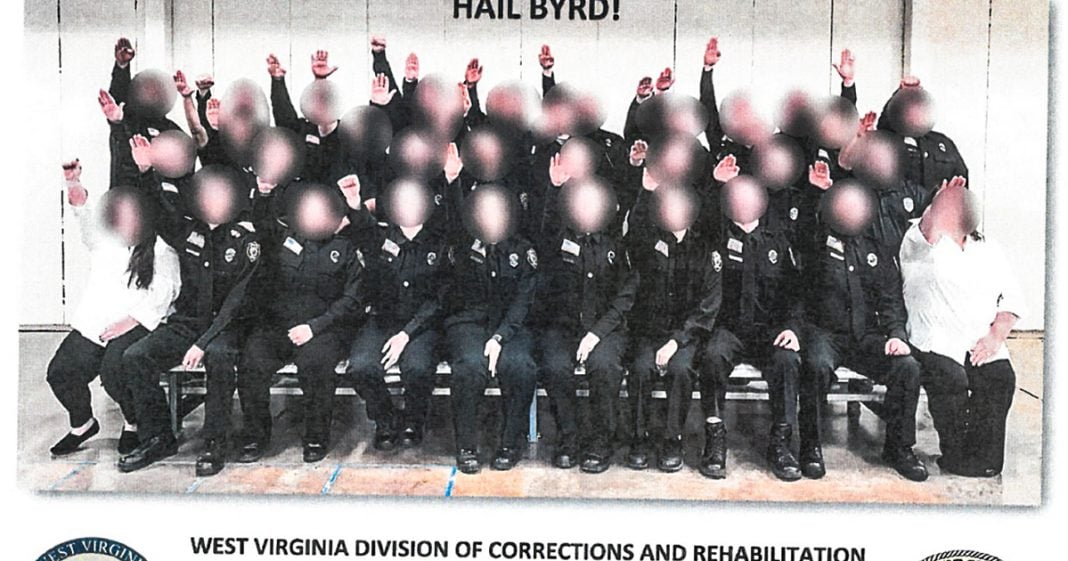 A group of 30 West Virginia correctional officer trainees have been suspended and are under investigation after an official photo of their class was revealed, showing all 30 giving a Nazi salute. This is one of the reasons why people have such a hard time trusting police officers, and this kind of behavior should be immediate grounds for dismissal, not suspension. Ring of Fire’s Farron Cousins discusses this.

Several dozen West Virginia state employees have now been suspended. After a photo on official state letterhead was released showing nearly 30 members of a correctional officer’s training class giving a Nazi salute. Nearly all 30 people in that picture had their arms raised just like you would see it at those Nazi rallies of people saluting Adolf Hitler and above them in the picture where the words hail bird, again, they’ve been suspended. You have people from the West Virginia government speaking out saying, this is despicable. It is awful. It is insensitive, but what this is, is a pretty good representation of why there is such animosity here in the United States between the general public and corrections officers or police officers or anyone in the law enforcement business, because this is the kind of stuff that we see and yeah, it’s great that these people are suspended and that there’s an investigation into why they did this, but what’s going to happen?

Well, in about 12 hours, the entire country’s going to forget that this story even happened. Aside from a few people in West Virginia, these correctional officers may be put back on pay. They may be unsuspended, probably most of them will just transfer out somewhere else where nobody who knows who they are. And that’ll be the end of it. And these people will still work as correctional officers, even though, especially in the state of West Virginia, there is already massive scandals happening with correctional officers, sexually assaulting, uh, inmates, um, assaulting inmates and all kinds of other atrocities happening. And this is the kind of people that they are attracting. People willing to sit there thinking it’s cute or funny, or maybe they believe in giving a Nazi salute for their official photo. Millions of people, millions of Jewish people were, were slaughtered during the Holocaust. And these West Virginia correction officers thought it was a good idea to go ahead and give that Nazi salute because that’s what they represent. And I guess that’s who they are.

But there is no excuse for this. But more importantly, there’s no excuse for these people to be suspended either. They should have been fired on the spot. These are state employees tax dollars, pay their salaries. So if you’re a West Virginia tax payer, guess what your paying for this hate your paying for these disgusting human beings and every single one of you better start writing your state legislators and saying, listen, super happy that you suspended them. Go ahead and fire them right now because you’re not going to use a dime out of my hard earned money to pay these racists to be correctional officers. If you are in the state of West Virginia watching this right now, that’s what you have to do. Phone calls, emails, letters, whatever it takes these men in this photo, this is who they are and they are not going to change by getting a slap on the wrist or getting transferred somewhere where nobody knows who they are, what they did. They have to be fired. They have to be taken off of the state payrolls, and they need to understand that their disgusting behavior has very severe consequences.