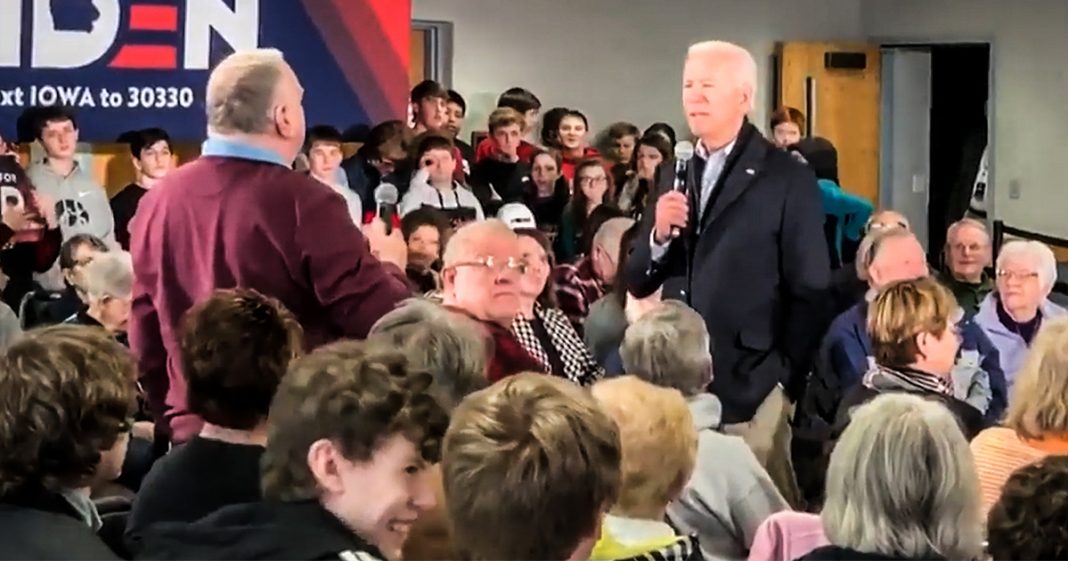 Joe Biden is apparently not handling criticism on the campaign very well at all. On Thursday, a viral video showed Joe Biden lose his mind after a man at his townhall event asked what qualifications his son had for taking the energy job in Ukraine, and Biden went off the rails. He challenged the man to a push up contest, an IQ test, and all sorts of other items meant to degrade the man. Ring of Fire’s Farron Cousins explains what happened and why it matters so much.

So yesterday at a campaign stop in Iowa, Joe Biden absolutely lost his cool. When someone in the audience had the audacity to ask him about his son and the entire Ukraine thing. Now, before we show the clip, let’s take a second here to go ahead and say that, yeah, this guy was asking the question that was based in pure fantasy and Biden could have just said, listen, you’re spouting Fox news talking points. This is ridiculous. None of that is true. Thanks for your question, but instead this was Biden’s response.

Joe Biden: You damn liar, man. That’s not true and no one has ever said that. No one has. You see it on the TV. Now I know what do it by the way, that’s why I not sent her. I don’t. I get up and let them go. Let them go. Fuck. The reason I’m running is because I’ve been around a long time and I know more than most people know and I can get things done. That’s why I’m running and you want to check my shape on. Let’s do pushups together, man. Let’s do, let’s run. Let’s do whatever you want to do. No. 2 Like I said, my son has not done anything wrong and I did not, but any occasion, and no one has ever said anything wrong, I, you said, I set up my son to work in an oil company and now what? You said, get your word straight, Jack. You dont hear that at an MSNBC. You did not hear that at all. What you heard. Look, okay, I’m not going to get an argument. Your mammo handle, mommy, you need to do it. But…

You know, I don’t even really know where to start with Biden’s unhinged tirade right there. Um, but I think I want to start by saying, if that was literally any other candidate doing that, the corporate media would already be calling for them to not just drop out of the race, but drop out of the United States altogether. They would be calling for them to be crucified on national television. If Donald Trump had done that, we would be sitting here talking about it, saying what a horrible human being he is as with the corporate media, but it’s Joe Biden. So we get nothing but excuses and vindication saying, well, that guy shouldn’t have asked that question. Now that man, whether he’s a maga troll or not had every right to ask that question, he had every right to ask that question. Joe Biden, on the other hand, did not have every right to sit there and ridicule this man with his fat shaming because trust me, as somebody who struggled with their weight their entire life, I have heard every single insult that Joe Biden just threw at that guy. Let’s do a pushup contest. Let’s see how far we can run. Let’s race each other.

Yeah, I’ve heard that when I was at, when I was a chubby ass little kid in middle school, I heard that weekly and I know exactly what it means and it is infuriating and Joe Biden is a piece of crap. Joe Biden is absolutely a piece of crap for doing that to that man. I don’t care what that man asked. I take this personal, maybe I shouldn’t. Maybe that is my problem, but you know what? I’m going to take this personal on behalf of every overweight person in this country. I’m taking it personally because I’ve heard it. I’ve heard it my whole life, and I know exactly what it means, but Joe Biden in that little tirade, especially at the end where he’s like, look, fat look, yeah, my name’s Faron. I have had plenty of people say, Hey, a fat, Oh, excuse me, Farron. Yeah, still happens actually. So I know exactly what he was doing. But beside all that personal issues aside, let me go ahead and say this. We’ll buy it in. Did their shows that he does not have the temperament to be the next president of the United States.

We already have an unhinged, crazy, arrogant guy sitting in the white house. We don’t need to replace him with another unhinged, crazy and arrogant guy just because he calls himself a Democrat. They’re no different in their temperament, and that is not what we want in the next president of the United States. And I will say it loudly and clear right here. I won’t vote for Joe Biden, not after what I saw in that video. I’m not going to do it. I will not do it for the first time in my adult voting life. I will leave that presidential spot blank if Joe Biden is the nominee, That was despicable. That was disgusting, and I will never, ever, ever vote for that disgusting, vile human being. May as well cast my vote for Donald Trump if I’m going to sink to that new level of low, and I’m not willing to do that either.