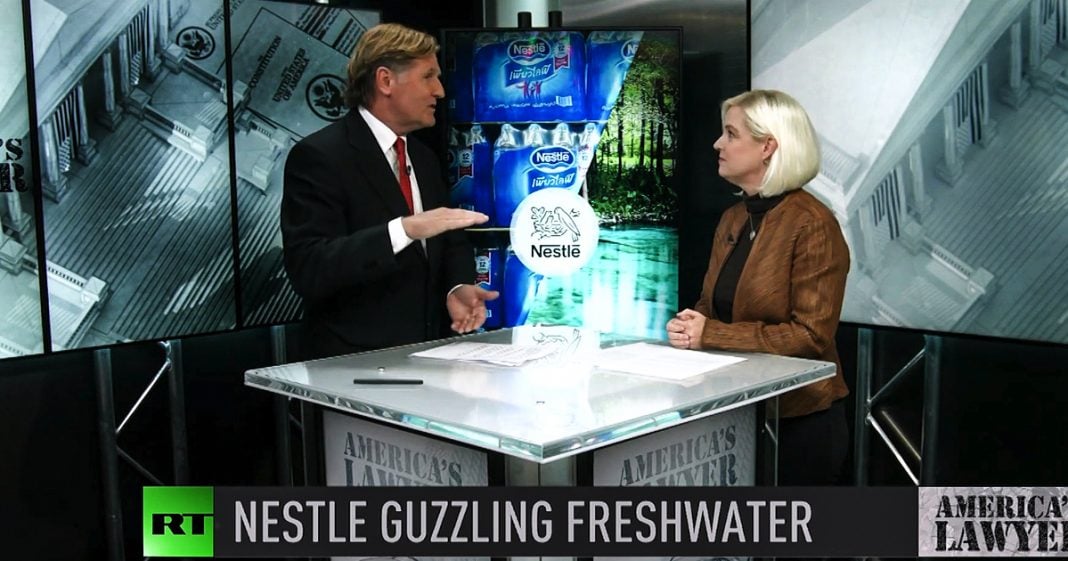 Via America’s Lawyer: RT correspondent Brigida Santos joins Mike Papantonio to explain an Illinois investigation that reveals tens of thousands of schoolchildren, some as young as FIVE, are being unlawfully isolated from their classmates as a form of punishment in over 100 districts, oftentimes for infractions as mundane as spilling milk. Then, legal journalist Mollye Barrows joins Mike Papantonio to talk about how Nestlé is now pushing to drastically increase its extraction of freshwater from Florida waterways to over one million gallons a DAY, sending alarm bells ringing among environmental activists concerned with the growing problem of freshwater scarcity in the U.S.

Mike Papantonio:             A new investigation reveals that children in Illinois are being locked away, terrified and alone at schools for reasons that often violate the law. RTs Brigida Santos joins me now from LA to talk about it. First of all, Brigida, why are children being isolated at schools to begin with? What, what’s this story about?

Brigida Santos:                   Well, children are often sent into isolation as a form of timeout. In Illinois, it’s legal for school employees to put children in a separate room if they pose a safety threat to themselves or others. But a new investigation of timeout logs reveals that school workers in at least 100 districts have been isolating children’s for reasons that are not legally permitted, including swearing, spilling milk, and refusing to do assignments, for example. So far, journalists have tallied up over 20,000 incidents between the fall of 2017 through December of 2018. Now, out of those only 12,000 reports were detailed enough to determine what prompted seclusion and in 42% of those cases, no safety concern was even documented.

Mike Papantonio:             You know, ProPublica looked at this and the numbers that they reviewed are startling. You talked about some of those numbers, but what they found was a pretty ugly pattern. And they say they’re supposed to be somebody standing outside the room when these children are isolated in basically padded rooms, taking notes about what’s happening minute to minute. But the problem is nobody’s reviewing those notes. And that brings me to the question, how old are these children and, and how did they react to being locked up? What, what are some of the stories here? Must be pretty bad. ProPublica did an entire exposé on this story.

Brigida Santos:                   Yes, so many of these children are as young as five years old and according to the timeout logs, most of the students who end up in isolation are either physically or mentally disabled or suffer from behavioral disorders like autism. Now because adults are legally required to stand outside the door and write down what happens, as you said, we know that in isolation students have injured themselves while scratching at the windows and tearing at padded walls. They’ve even thrown their bodies against locked doors, hit their heads and gotten bruises. Their hands have bled from banging on the doors and in some cases they’ve even wet their pants. Now the median time that students have been kept in isolation is 26 minutes, but some of these students have been locked up for hours or been locked up on multiple occasions.

Records also reveal the heartbreaking things that some of these kids have said during seclusion. For example, one child screamed, I’d rather die, you’re torturing me, while in isolated timeout. Workers and teachers say that seclusion helps keep everyone in class safe. They also claim that it helps children learn to calm themselves down. But in 2012 the US department of education warned against seclusion saying it’s dangerous and that there’s absolutely no evidence that it reduces behavioral issues and special education experts agree. They say isolation has no therapeutic or educational value and that it can actually traumatize children.

Mike Papantonio:             Well, you know, a lot of States use isolation. I mean this is, I understand this is being looked at right now and it should be with these stories, but it seems like this is a little bit wider than just Illinois. I mean, if these incidents are illegal, why isn’t anybody cracking down on the practice to begin with? I mean, why is this even taking place?

Brigida Santos:                   Yeah, it’s not strictly happening in Illinois. Now, at least 19 States though, have banned seclusion. But there are no federal laws regulating the practice. And even though Illinois school workers are legally required to file those detailed reports about the incidents, no one’s required to read them, which means that state education officials are not monitoring these types of timeouts. People are now questioning whether our tax dollars should fund schools that illegally lock up children. So hopefully this investigation will raise awareness and result in some much needed systemic changes.

Mike Papantonio:             Well, and to me, you can’t miss this. You can’t miss this point about the story. This isn’t just the average child that misbehaves. These children have all kinds of disabilities. They’re mixed up with kids that are also put into these same rooms. So they’re just, just behavioral problems. So this, this goes beyond just trying to correct behavioral problems. These are children that have some real fundamental disabilities and that’s, that’s easy to miss in this story. Anyway, Brigida, thank you for joining me. Okay.

Mike Papantonio:             Fresh water scarcity is a growing concern across many US households. And Nestle’s managed to send alarm bells ringing among environmental activists in Florida for fighting against the company’s request to dramatically increase how much fresh water it extracts for bottling every year. I have legal journalist Mollye Barrows here to walk us through this. Mollye, exactly how much fresh water is Nestle stealing from the American public?

Mollye Barrows:                In Florida alone. So yeah, as I’m looking into this, I realized that these, the complaints that environmentalists have about Nestle here are popping up all over the country, all over the world. But in this particular case, this is Ginnie Springs, Gilchrist County, Florida, and this one particular company, let’s see, what’s it called, Seven Springs. They’re the ones that actually have the permit to the wells and they’ve been working with bottled water companies for a number of years and for the past 20 years, even though their permit says they can take up to 1.2 million gallons, they’ve really traditionally only taken about a quarter of that. Well now, Nestle has asked to take the full amount and environmentalist and local activists are really upset about it because they say that studies have shown these water levels are already low.

You’ve got the nearby Santa Fe river, four years ago they did some studies and they found that it’s already low. Part of the reason it’s low is because of groundwater pumping as well. You’ve got nearby agriculture sites, but in essence these Springs are starting to drop and they’re saying if we let Nestle take all this water, it’s going to cause problems for the environment.

Mike Papantonio:             Here, here’s how, here’s how we boil this water down. Nestle is taking a natural resource from Florida and not paying anything. Tax…

Mike Papantonio:             $115 they take, they take 1.3 million gallons of water. Nobody gets paid for it. Nestle puts it into a bottle, sells it for God knows how much of an increase. Taxpayers have to pay and this is the other part of it. Nestle, then externalizes all the risk to Florida.

Mike Papantonio:             If we have a problem from this, taxpayers have to pay this. They had the same problem in California, didn’t they?

Mike Papantonio:             They got, they got really hammered in California for this.

Mollye Barrows:                San Bernardino forest. I mean, this has been an ongoing thing for a long time. State regulators are saying, you’re taking this water illegally. You basically pumped it dry in a place that’s prone to forest fires. As you know, we’re handling litigation with the Woolsey fire out there, but at any rate, this has been an ongoing situation with Nestle saying we’ve got full rights to take this. 45 million gallons alone last year that they took from a drought infested area.

Mollye Barrows:                They are, activists and state regulators in California are involved. Activists are definitely getting involved in the Ginnie Springs thing as well. In fact, there is a petition change.org basically saying, stop Nestle from bottling Florida’s water at Ginnie Springs. Their goal is 75,000 signatures. They’ve almost got 74,000 so there’s a lot of push. There’s a lot of support against this because even though agricultural companies request larger permits than what Nestle is asking to take from Ginnie Springs, the problem is there is so much, the water levels are lowering because of groundwater pumping because of agriculture. And they see this as an opportunity to really bring to light that Florida is not managing their water properly.

Mike Papantonio:             I’m trying to understand how in the world the Florida residents have any benefit here. There’s zero benefit. So this cat comes, Seven Springs.

Mollye Barrows:                And it’s coming up over and over again. In Michigan, there’s complaints about the Dead River. They’ve pumped millions of gallons out of that. It’s a constant battle back and forth, legal battles in court between the state of Michigan as well as Nestle over their access to those natural resources. There’s a small town in France that’s basically saying the same thing that Nestle.

Mollye Barrows:                Interesting. But it’s over and over again, the same thing. How do they come in? I’m curious. I’d like to look into some more and just basically say, you know, do they get permission from, like you said, the person who has the permit or maybe the private land owner and then they basically steal what could potentially flow on to benefit everyone, like taxpayers and citizens.

Mike Papantonio:             What if your a taxpay, what if your a taxpayer living along the river that’s already projected to be affected by this? Now Nestle comes back and say what they, says what they always say, oh well, it’s only going to be a half an inch if anything over the next 10 years. So, you hear those types of…

Mollye Barrows:                That’s exactly what Seven Springs said about Ginnie Springs. They said, y’all are just worrying about nothing. We’ve done some studies and the amount they want to take, it’s only going to affect the water levels by lowering it less than an inch.