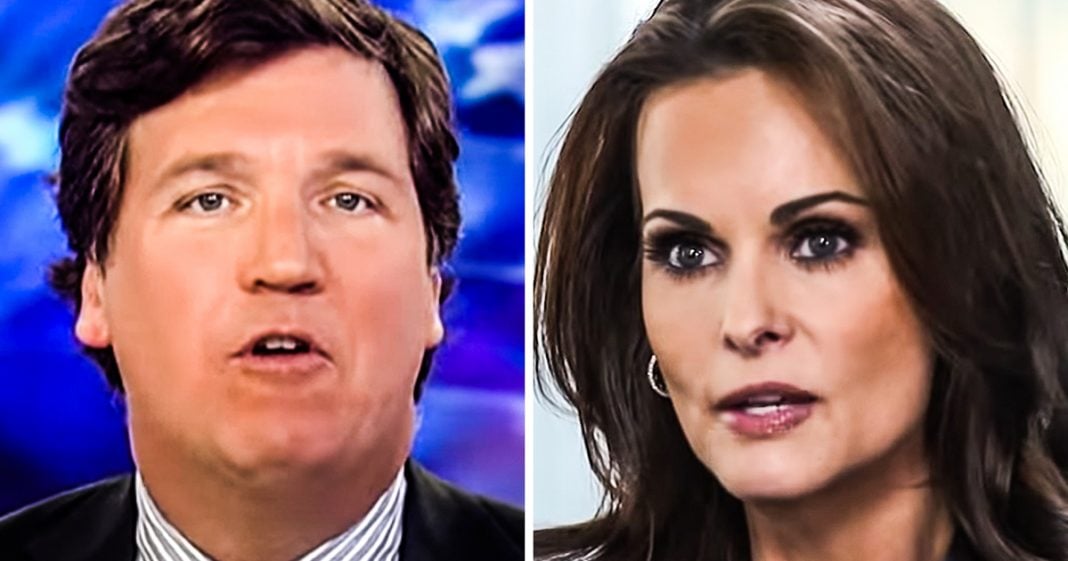 Former Playboy Playmate Karen McDougal has filed a defamation lawsuit against Fox News host Tucker Carlson, after Carlson claimed that she was just out to ruin Trump’s career by threatening to go forward about their affair. This never happened, and McDougal wants Carlson held accountable for spreading this vicious lie about her. Ring of Fire’s Farron Cousins explains what’s happening.

Former Playboy model Karen McDougal is suing Fox news and Tucker Carlson for defamation after Tucker Carlson claimed last year that McDougal who had an affair with Donald Trump that she says lasted for about a year, but Carlson accused her last year of trying to extort the president and threatening to ruin his life. A claim that McDougal and her attorney say is nowhere even near reality. Here’s what happened. As we all know, Karen McDougal, the Playboy playmate, uh, had an affair with Donald Trump that lasted about a year. Trump has still denied that the affair ever took place, but the national Enquirer during the election paid McDougal $150,000 for the story and that was the catch and kill. They didn’t run the story. She got the money, they buried it. So Donald Trump’s campaign would not be hurt by it. Then once all this news broke and we knew what was going on, Tucker Carlson came out on his program again about a year ago and said, this woman, Karen McDougal threatened Donald Trump, had said, I will ruin your life. I will ruin your marriage.

I will ruin your political career if you don’t pay me money. That’s what Tucker Carlson claims McDougal said, but unfortunately for Carlson, that never happened. McDougall was more than happy to not talk about this affair. She never wanted to go public with it. She never threatened anyone and there’s no evidence whatsoever available to say that she did. So Carlson and his employer, Fox news for allowing this to air and now facing a defamation lawsuit because McDougall claims that this is now hurting her future career prospects, which I have to imagine. It certainly would. And see, that’s another thing about defamation, defamation, excuse me, liable, slander and all that. You have to be able to not just prove that, Hey, you said something false about me. Sure. Okay. People say false things about other people all the time. It’s called gossip, so you can’t just sue for that, but you have to be able to show that it is hurting you in some way, shape, or form specifically financially.

In most cases, you know you can’t get a job because Fox news said something horrible about you. And as long as McDougall can prove that, which I think should be very easily provable, she can win her case here. But here’s the thing, it’s not about the money. You know, the sum that they’re suing for is not even been disclosed. What she wants to achieve here is to send a message to Fox news, and that message is you can’t just make stuff up and report it to millions of people. That’s not okay. Fake news is not OK and that’s the message she wants to send. And that’s the message that has to be sent. These networks, whether it’s Fox or MSNBC or CNN, even though Fox is obviously the worst, they can’t just make things up all the time. But that’s what Fox news does.

You can’t destroy somebody’s life. And then you go home at the end of the day thinking, wow, that’s pretty good day at work. That’s not how this works. You have to pay the price. You have to be held accountable because if there is no accountability, then all hell breaks loose, right? The media could just say whatever they want about whoever they want, whenever they want, and that’s not how the law works. Fox news slandered this woman, they defamed her and they need to pay the price, not just financially, but with a little bit more responsibility in their newscasts, and that is the overall goal of this lawsuit.