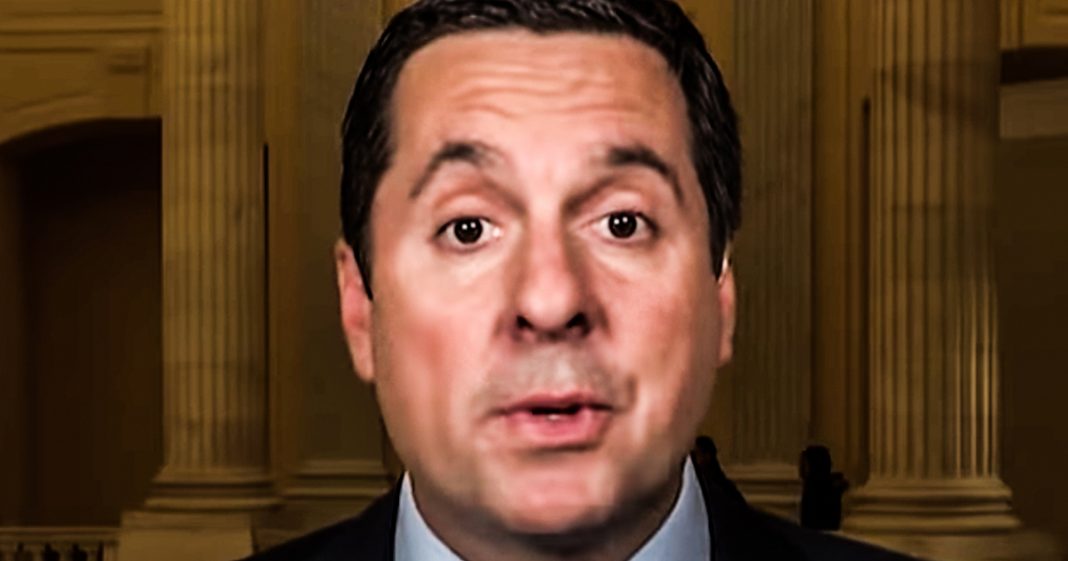 Republican Representative Devin Nunes can no longer deny his involvement in the efforts by the President to extort the Ukrainian government for dirt on Joe Biden. His call logs have betrayed him, the people he’s worked with have ratted him out, and he has nowhere left to turn. Democrats in the House need to immediately launch an investigation into Nunes to determine if he is guilty of a conspiracy along with the President and Rudy Giuliani. Ring of Fire’s Farron Cousins discusses this.

It is time for Democrats in the house of representatives to launch a full scale investigation into Devin Nunez because at this point, based on everything we know based on the phone call records based on the testimony and based on the claims of Lev Parness, Devin Nunez is in fact a co conspirator in this Ukraine scandal. That is the conclusion that we can arrive at right now and that is what the Democrats in the house need to investigate. Devin Nunez for find out for certain if he is in fact a co-conspirator. Because here’s the thing, the call records show the Devin Nunez has been lying about his contacts with Lev Parness. You know, a week before those call records came out, we had the big story break saying that Devin Nunez met with Lev Parness at the request of Rudy Giuliani Parness, put them in touch with other people from the Ukraine to help dig up dirt on Joe Biden.

Devin Nunez threatened to sue media outlets who published this story because this is totally false. I’ve never met Lev Parness. Devin Nunez claimed, never talked to him. And then a few days later those phone call records came out proving that Nunez was lying about never having contact with him and Lev Parness himself through his attorney. Just this morning said Lev Parness, remembers exactly what he and Devin Nunez talked about and is more than happy to go to Congress and tell that story with the hashtag, Let Lev speak. And as I’ve said before, I think love Parness is going to be the guy that takes down everyone because he’s trying to save himself. He understands what it’s like to be part of a criminal syndicate. And that is essentially what this administration became under Rudy Giuliani’s guidance, a criminal syndicate. He kept notes, he kept records both mental and physical. He videotaped things. He has audio recordings of things. This is a guy who covered his own ass because he knew someday he was going to need it and he did.

And that time is right now. And so in order to avoid a lengthy jail sentence for the relatively small crime of campaign finance violations, Parness wants to come clean. And one of the things he wants to come clean about is what Devin Nunez did and that is what Democrats need to know. We cannot have a coconspirator sitting in the us house of representatives acting, acting as the ranking Republican on the house intelligence committee when he can’t even be trusted when he’s jet setting around the globe, over to Europe, meeting with these people, trying to help the dig up dirt from a foreign country on his political adversary. But based on the evidence right now, that appears to be exactly what has happened. Devin Nunez has to be investigated. There is no way around it and as I’ve mentioned, it shouldn’t even be part of the regular impeachment inquiry.

This needs to be a separate thing and the whole dang country needs to watch it and see exactly what Devin Nunez did, what Devin Nunez knew and who Devin Nunez spoke with so that we can understand a little bit better who this man really is. That is what Democrats have to do. You have to televise it. You have to talk about it because Nunez is one of the biggest attack dogs the Republicans have to offer right now, and if we can implicate him in this criminal conspiracy, then you’re taking away one of the Republican party’s greatest weapons that they have right now.