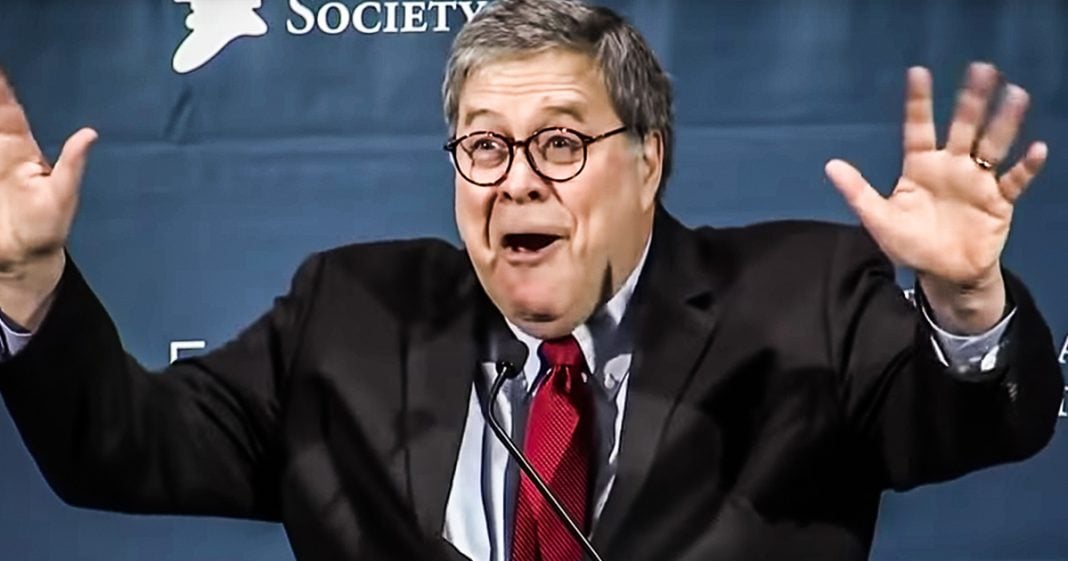 William Barr is doing everything possible to shore up the “Blue Lives Matter” votes for Donald Trump, and this week he actually suggested that cities with residents who protest police officers could end up losing police protection altogether. Republicans need to understand that it isn’t law enforcement that is the problem, it is the people on the force who profile and kill innocent, unarmed people of color. Ring of Fire’s Farron Cousins discusses this.

Attorney general William Barr has decided that being attorney general is not exactly the job he wanted to have and so instead he, what he’s doing is he’s actually campaigning for Donald Trump and he did it earlier this week at an official department of justice event meant to honor police officers, where he made the following statement. He said, Americans have to start showing more than they do the respect and support that law enforcement deserves. If communities don’t give that support and respect, they might find themselves without the police protection they need. Now, I’m going to analyze that statement in a minute, but first let’s talk about why he said it. He said it because he’s campaigning for Donald Trump. He wants to secure that blue lives matter vote and that is what this statement was all about. Telling police officers that we hate protesters, we love you. Americans who don’t like you, which is code for liberals, we’re just going to say to hell with them.

Because they hate the cops that are out there profiling, harassing, and murdering innocent unarmed American civilians, particularly those people of color, which happen to disproportionately be the victims of these police crimes. That’s what we hate. That’s what we’re tired of and that’s what people are protesting around the country and have been for the last few years. It’s not all police. We don’t hate every single one of them and we don’t hate them only because they have a badge. We hate them when they kill members of our communities who weren’t armed, who weren’t doing anything wrong. We hate that, and rightfully so, and everybody should hate that.

That’s our problem. But Republicans like to jump on the issue and just say, look at these liberals out there. Look at these animals out in the street. They hate police officers. No, they hate when their friends, their relatives, whoever it is, they hate when those people get shot in cold blood by a police officer and then that police officer faces absolutely no consequences. You know, oh, you got paid leave for a couple of weeks, so you got to take a little bit of a vacation from work. That’s not punishment. That’s a reward. Oh, you got moved to a different city so you wouldn’t get harassed. That’s protection. These cops need to face consequences. These cops need to have better training. Just like in other countries, these cops need not be given these surplus weapons of war that Donald Trump wants to hand out, $600 million worth by the way, headed towards local police departments across the United States. That needs to stop. The killing needs to stop. But William Barr would rather strip these communities who are pissed off because their people are dying. He would rather strip them of their police protection than acknowledge for one second that maybe we got a problem with some of these officers wearing a badge across this country.