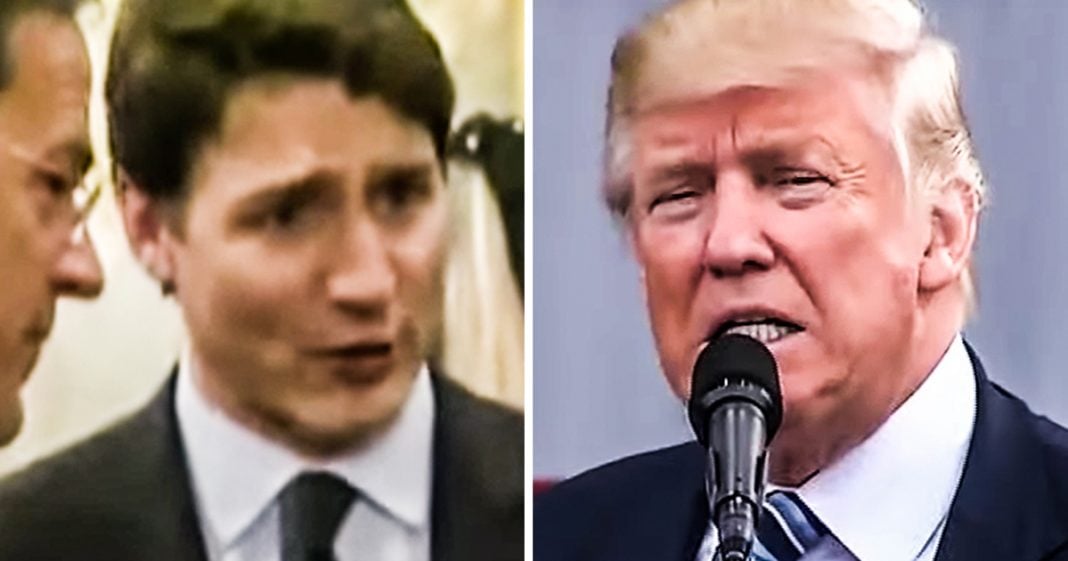 Donald Trump wasn’t happy about the way that other world leaders were treating him at this week’s NATO summit, but rather than acting like an adult, the President decided to cancel his planned events yesterday afternoon and decided to head home early. This came shortly after he was caught on a hot mic congratulating himself for calling Canadian Prime Minister Justin Trudeau two-faced. Ring of Fire’s Farron Cousins explains what happened.

Donald Trump decided to come home from the NATO summit a little bit earlier than expected after he grew angry with Canadian prime minister Justin Trudeau over his mocking of the president in front of other world leaders. Now, the story is actually really interesting. One, it’s not surprising that Donald Trump threw a little temper tantrum and decided to cancel a couple of press conferences and then come home early, which is exactly what happened, but it’s Donald Trump’s attempt to downplay his attack on Justin Trudeau following the release of that video that is so humorous. Because as we all know, we discussed it yesterday, Donald Trump came out after that video was released, he was angry and he said that Justin Trudeau is two faced. Then later yesterday, Trump was caught on a hot mic congratulating himself about how funny it was that he called Justin Trudeau two faced. Then after that, Donald Trump gave a little impromptu press conference where he was with Angela Merkel and he said the following, honestly, with Trudeau, he’s a nice guy.

I find him to be a very nice guy, but you know the truth is that I called him out on the fact that he’s not paying 2% and I guess he’s not very happy about it. He’s not paying 2% and he should be paying 2%. It’s Canada. They have money and they should be paying 2%. So I called him out on that and I’m sure he wasn’t happy about it, but that’s the way it is. Now, he didn’t specifically try to say that he didn’t say two faced, but the fact that he repeated the phrase 2% four times in three sentences is Donald Trump’s attempt to rewrite what he actually said about the Canadian prime minister. 2%, it’s 2% he’s not paying 2% and it’s 2% and we need some 2% and you folks probably thought I said two faced, but no, I said 2%. I guarantee you that is where this defense is headed.

He never said two faced. He said 2%, you misheard him, even though we heard him laughing about it on the hot mic. The president is losing what little bit of grip he had on reality. And the problem with people like that is that they think everybody else has also lost their grip on reality. Stupid people in general tend to think other people are dumber than they are, which is also at play here in addition to losing his grip on reality. But the truth is that we know what we heard. We know what we saw Justin Trudeau doing, even though other world leaders have said, oh no, no, we were mocking him at all. You were mocking him and that’s okay except for the fact that he’s going to come back here to the United States. He is back here now and he’s going to take it out on all of us.

So we’re going to be the ones paying the price because he’s probably gonna come back, decide to slap some tariffs on everybody who laughed at him, which is going to be most of the planet. And then, you know, we here in the United States are going to have to pay those increased prices. That’s probably what’s going to happen. He was already on the verge of putting more tariffs on France. He has discussed putting more tariffs on Canada, and now that all these other world leaders have pissed him off so much, I guarantee you within the next few months, we’re going to see those tariffs put in place just to protect Donald Trump’s very fragile ego.