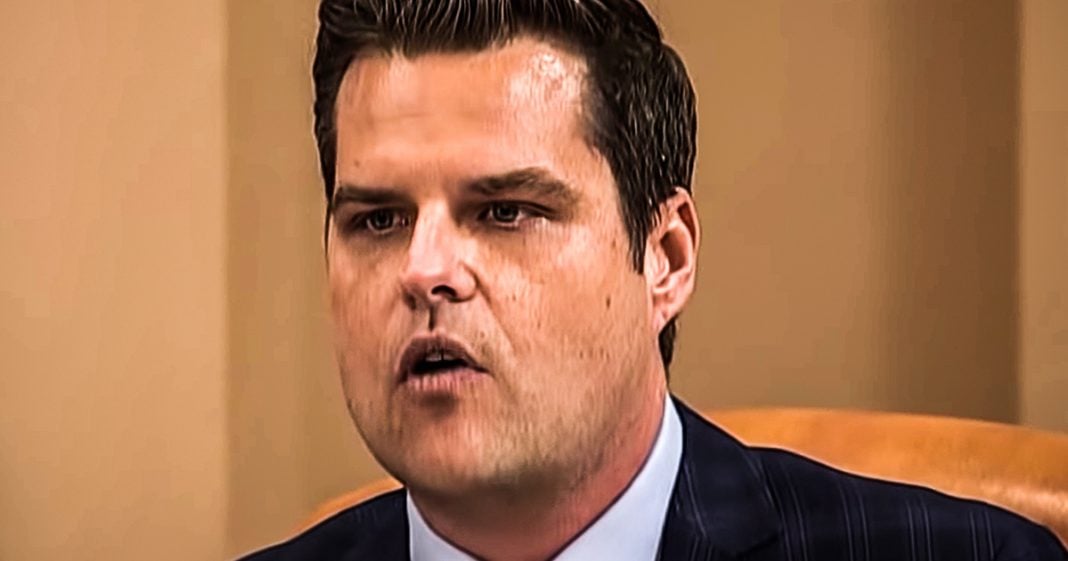 The impeachment hearings have begun in the House Judiciary Committee, and to no one’s surprise, Matt Gaetz made a complete fool of himself during his first day. He suggested that the House should actually be working to impeach Obama instead of Trump, based solely on a conspiracy theory that the President has been pushing since early in his administration. Ring of Fire’s Farron Cousins discusses this.

The only downside to the house impeachment inquiry moving over to the judiciary committee this week is that unfortunately, Republican Matt Gaetz sits on the judiciary committee. And when the hearing started yesterday, before we had the screaming and the shouting and the very weird Republican reactions to everything, it was pretty much generally assumed that Matt Gaetz was going to say something incredibly stupid. And of course he didn’t disappoint during the hearing, Matt Gaetz actually suggested that it is not Donald Trump we should be impeaching, but in fact is Barack Obama. His exact quote is, if wire tapping political opponents is a political offense, I look forward to reading that inspector General’s report because maybe it’s a different president we should be impeaching. Now, what’s weird about this is that this article right here is from business insider and business insider goes on to their next paragraph to say Gaetz was likely referencing an incident in 2013 when it was revealed that the national security agency was monitoring the calls of 35 world leaders during the Obama administration.

White House said at the time, Obama had no knowledge of this. That’s not what he’s referring to business insider, do better. We know exactly what Matt Gaetz is referring to. He is referring to the conspiracy theory pushed by Donald Trump that Obama wire tapped him. That’s what he’s talking about because if the NSA was wire tapping 35 different world leaders, those would not be Barack Obama’s political opponents and Matt Gaetz specifically said, wire tapping political opponents in his little diatribe. So that’s just kind of me lashing out at business insider for doing such a shoddy job on their journalism there. But let’s focus back on Matt Gaetz, right? Matt Gaetz is there at the impeachment hearing, pushing a failed phony bogus conspiracy theory spread by the president of the United States and suggesting that we should impeach the former president for it. Now, according to one slate article, I read this yesterday and then was shocked this morning to find out that all of the other people who say that you can impeach a sitting president are all also referring to that article in slate.

So there’s like literally one source that says, actually you can, this is from many, many years ago. Actually you can impeach a former president. So I guess this one article from slate is like the Holy grail of people who want to prove Matt Gaetz correct. But sure, some legal scholars say, yeah, you can probably do this. And all it would do is say, okay, well this person can’t hold any other office for the remainder of their days. Oh God forbid. Let’s not do that to Obama. But here’s the thing, Obama hasn’t committed any crimes, folks. Whether you love the guy, hate the guy, or you’re like me, you’re somewhere in the middle. He did good. He did bad. He didn’t do anything that was impeachable. He didn’t do anything that deserves to have him locked up for the rest of his life or forbidden from holding a public office ever again.

Matt Gaetz is pushing a conspiracy theory because that is what Donald Trump wants him to do. Matt Gaetz is the court jester for this impeachment hearing, and his job is to go out there and make a complete fool of himself any time Donald Trump wants him to do it, and by God he’s going to be the best jester we have ever seen in the house of representatives. Unfortunately though, for his constituents down here in Florida’s first district where we’re sitting right now. We have to live with this jackass. We have to walk around knowing that this is the guy we, or they actually, sent to Washington DC. I did not vote for Matt Gaetz, nor would I ever vote for Matt Gaetz. But he’s our guy, unfortunately, and that’s what we have to live with. This clown whose daddy got him out of all kinds of trouble when he was just a little bit younger, who is now making a complete fool of himself because that’s what Trump wants him to do.