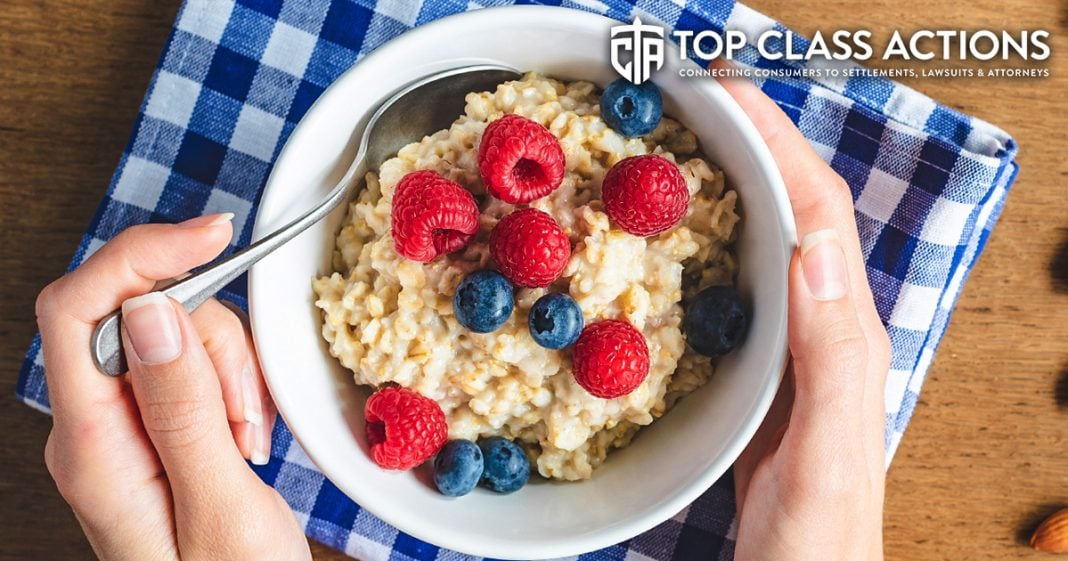 A recent Whole Foods class action claims that the natural retailer’s oatmeal products contain concealed sugar. Whole Foods sells a variety of instant oatmeal products under their 365 Everyday Value Brand which are available in stores as well as from online retailers such as Amazon. Despite the prominent pictures of fresh raspberries atop a bowl of oatmeal seen on the product labeling, the Whole Foods oatmeal may not be as healthy as it is portrayed to be. Ring of Fire’s Farron Cousins discusses this with Scott Hardy, President of Top Class Actions.

Farron Cousins:                  Sometimes companies like to get creative with how they hide what’s actually in their products. For example, maybe they don’t want to say high fructose corn syrup, they just say sugar. Or maybe they don’t want to say sugar and they say something like, organic dehydrated cane juice solids, which that phrase sounds like, hey, maybe that’s something that’s healthy. It’s organic, it’s cane juice. I’m sure there’s nothing wrong with it. But according to a new class action, that very phrase is used by Whole Foods on their brand of oatmeal to simply mean one thing. Sugar.

Joining me now to talk about this is Scott Hardy with Top Class Actions and Scott, I got to say that is absolutely one of the most impressive feats of linguistic gymnastics that I think I have ever seen and that comes from 15 years of covering politics. I don’t know that I’ve ever seen anything like that.

Scott Hardy:                          Yeah, I was shocked just like you were when I was reading through the class action and thinking, you know, we, marketers love to think about new terms to try to deceive customers and to make them think that they’re getting something healthier. So they don’t want to say sucrose. Everybody knows sucrose is sugar. Oh, we don’t want to go ahead and just say sugar because that’s bad. What else could we say? Well, we don’t want to just say like molasses, molasses, everyone knows molasses is sugar too. Oh, well we can’t just say canes or cane sugar, but we could say evaporated cane juice. Oh, that sounds good.

Farron Cousins:                  I mean, you gotta hand it to them though, because I mean technically that’s an accurate description of what it is. But at the same time, it’s also hugely deceptive. I mean, if you were to walk out of your house right now, go, go to a grocery store, whatever it is, and ask anybody in there what an organic dehydrated cane juice solid is. I guarantee you none of them are going to say that it’s sugar or that they’ve ever heard of it to be honest. So yeah, that, that’s exactly the problem here. They had to list the ingredients, but, you know, oh well you didn’t say we had to call it what it actually is. We made up these clever terms for it to confuse people.

You know, the packaging says low fat, so of course you’re not going to expect the second ingredient in this product to be sugar, which is actually one of the claims made in this lawsuit. That’s the second ingredient listed, this super high fancy word for sugar in this low fat or healthy or non-GMO. There’s pictures of fruit on the front of it. You think you’re getting something good, something that’s going to start your day right. Puts you on the path towards permanent healthy living. But no, you’re getting sugar.

Scott Hardy:                          Exactly. It’s not like you’re, you’re picturing Snoop Dogg sitting there, sipping his gin and cane juice, Mmm. This is all sugar. It’s so, it’s not healthy for you. Even though it’s prettied up on the package. The, the companies that, you would expect Whole Foods would do a better job with their products to make sure they’re not deceiving customers, but, you know, it’s a big company and they’re trying to sell products. People want to get healthy. They think that they’re getting healthy oatmeal. They don’t think that, as you said, that they’re getting sugar, sugar as a second ingredient when they’re buying this and feeding it to their kids.

Farron Cousins:                  You know this, again, this just shows, and I know you and I have been talking about this kinds of things for over a year now, but this really shows how deceptively crazy these companies can get when they’re trying to sell these products. They know people want to be healthier. Now, whether people follow through on that, wanting to be healthier, you know, that’s up to them and that’s fine, but you cannot take that choice away from them with your clever marketing language. And it appears that that is exactly what Whole Foods has done with this particular case.

Farron Cousins:                  Absolutely. For more information about this issue, please follow the link in the description of this video, head on over to Top Class Actions and while you’re there make sure you sign up for their weekly newsletter. Scott Hardy with Top Class Actions, always a pleasure talking to you.