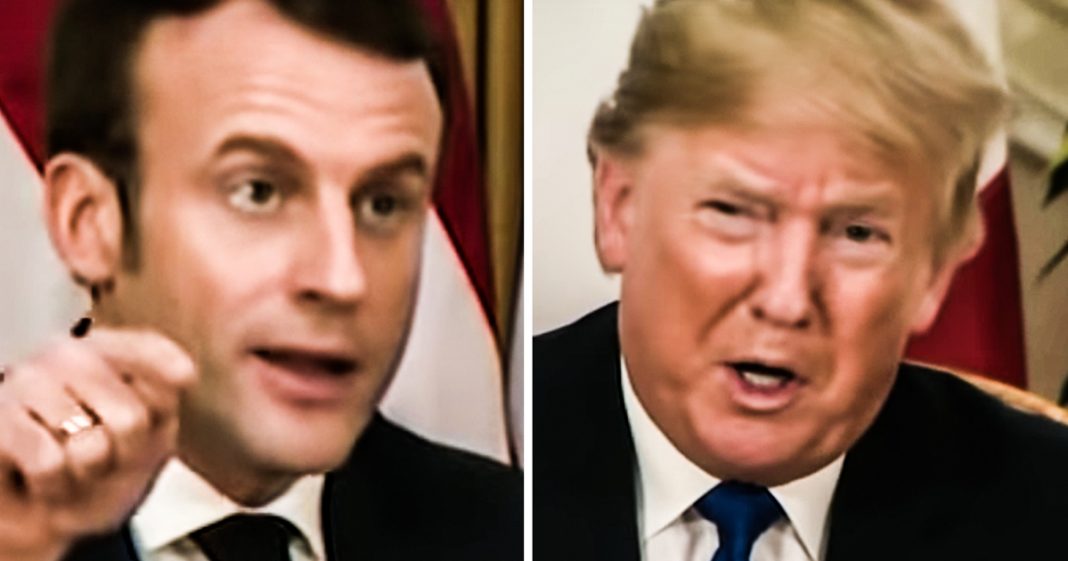 Donald Trump attended the first day of the NATO Summit yesterday, where he promptly became the laughing stock of the entire world. He was fact-checked by foreign leaders during press conferences, snubbed by a member of the British Royal Family, and even mocked behind his back by Canadian Prime Minister Justin Trudeau. These people don’t take Trump seriously, and neither should American voters, as Ring of Fire’s Farron Cousins explains.

So yesterday was the first day of the NATO summit taking place over in the UK and as expected, Donald Trump not just made a complete fool of himself, but also became a laughing stock around the entire planet. Now we as Americans are used to Donald Trump going overseas, going to these meetings, the G7 and all these and embarrassing us, right? But yesterday it was a little bit more than just embarrassing us because as we saw, they were making fun of him. They were openly mocking him. They were fact checking him to his face because they’re just sick and tired of this guy and they don’t even take him seriously. You had French president, Emmanuel Macron, who literally fact checked Donald Trump to his face while they were doing a joint press conference. Trump said, ISIS has been defeated and Macron had to say, yeah, that’s not true whatsoever.

There was also Donald Trump’s claim that, oh, he’s the one who got NATO to stop charging the US so much and start charging everybody else more when in fact Obama put that in place in 2014. That was an Obama accomplishment that Donald Trump has taken credit for. There was also him getting snubbed by Princess Anne. There was also the best part, the Trudeau video where Trudeau was sitting there speaking with Macron, UK prime minister, Boris Johnson, Dutch prime minister, Mark Rutte and princess Anne, and he’s mocking Trump. Now, he didn’t say Trump’s name, but everybody knew that that’s what he was talking about because Trump had given about a 40 minute impromptu press conference and they were all laughing and mocking him because that’s what the United States has become, a laughing stock, a subject of ridicule. And this is what we were during the Bush administration too, because we had this brain dead hapless US president who lied the world into an endless war.

And everybody knew it and they made fun of him all the time. They didn’t take him seriously. Obama came along and despite some of his faults, people did respect the United States around the world again, they did and then came Trump, and now we’re back to being ridiculed and mocked, and that’s not going to change. Now, Donald Trump has already released a statement following this Justin Trudeau incident, calling Trudeau two faced. So I can only imagine that when he gets back to the United States, we’re probably going to see some more tariffs flying away towards Canada because that’s what Trump does when he gets mad, when he gets angry, when he gets embarrassed, he tries to punish those that have embarrassed him. So all of these other countries, all of these other world leaders who are out there making fun of Trump, just know that we, the people of the United States are going to be the one that suffer for this. Now, I’m not saying you shouldn’t mock him. You’re free to do whatever you want. Just remember that he’s not going to suffer for it. We are, because I can promise you when he gets back home to the white house after watching Fox news tell him how horrible these world leaders are. He’s going to come back and try to find a way to punish you. That in the end is only going to punish his constituents.