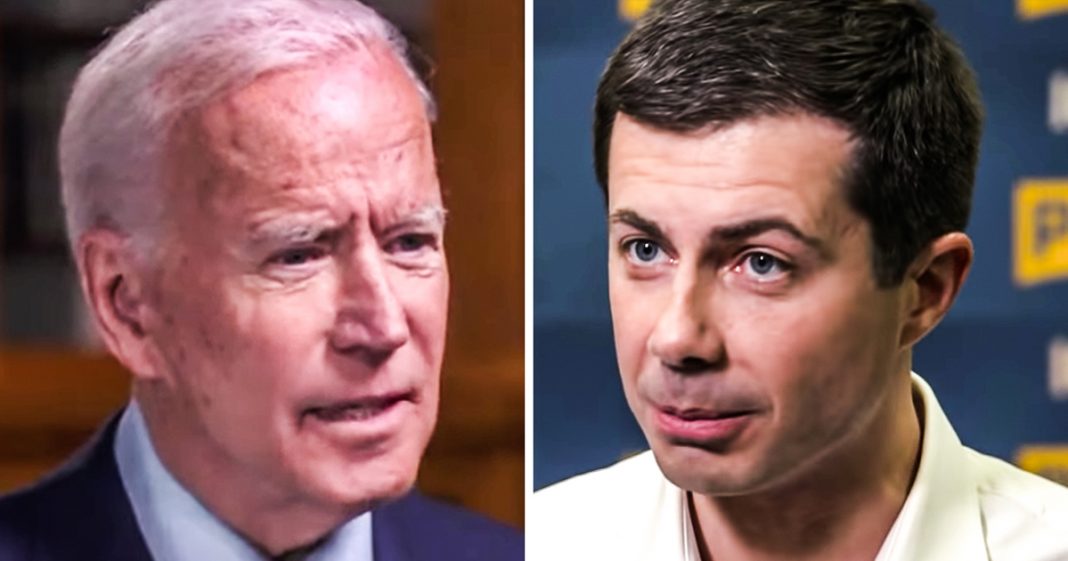 At a campaign stop on Monday, Joe Biden lashed out at Pete Buttigieg for allegedly stealing Biden’s healthcare plan. The plan, Medicare for All Who Want It, is a complete disaster just waiting to be dismantled by the healthcare industry and Republicans, so it seems odd that Biden would be angry that someone wants to copy his bad ideas. Ring of Fire’s Farron Cousins discusses this.

On Monday, Joe Biden grew furious at Pete Buttigieg while on his campaign bus, when talking to reporters, Biden said that Buttigieg stole his health care plan. This is exactly what he said. He stole it. What would you have done to me? You’d have torn my ears off. Now, we know how Joe Biden speaks and that’s actually pretty strong language from Joe Biden accusing the media of not caring that Pete Buttigieg stole his horrible health care plan. Now Joe, here’s the thing, your health care plan, much like Buttigieg’s, because they are pretty much identical, they’re both awful. They’re both just God awful. Why in the world would you want to defend that thing? Why would you be mad if somebody stole it? Let him steal it, claim it’s his own then come up with something better and say, no, he took that. I’m going with the better plan.

Here’s the thing though, as I said, Biden’s plan sucks. Buttigieg’s plan sucks and here’s why. Because it’s Medicare for all who want it. Medicare for all who want it is designed to fail because one, it’s going to keep the same deductibles and copays and premiums in place. You’re just paying them to the federal government instead of paying them to an insurance company. That doesn’t solve any problems at all. So off the top, the plan is horrible because it’s no different than what we have now. Just where you’re getting your coverage from. You still pay at the point of service. You’re still going to have these astronomical out of pocket costs. People are still going to not be able to afford it and Buttigieg’s plan and I believe Biden’s plan as well does offer some subsidies for some lower income people in this country and that’s one of the reasons why it is designed to fail.

The subsidies can be cut by a future administration or a future Congress. We are watching that happen right now with the affordable care act. Subsidies were designed to be destroyed. Any half measure plan that says the government’s going to enter the insurance market along with all of these other providers is also designed to fail because a future administration, a future Congress can just say, hey, federal government’s not going to do that anymore. You have plenty of other options out here, go to one of them. And suddenly that Medicare for all who want it is a thing of the past already. And that’s what’s going to happen. And that’s why these moderates, these centrists, these corporatists are embracing it because they know that. They hope they can trick you with their fancy little buzzwords saying, we’re not going to take away your health insurance like these other cats. We’re going to give you Medicare if you want it. If you like your insurance, you can stay on it.

And eventually Medicare for all who want it is going to be destroyed because that’s the way it is designed. They know that’s gonna happen. Their donors know that’s going to happen. And that’s why Buttigieg is now sitting at the top with more billionaire donors than anybody else now that Kamala has dropped out. This plan is awful and I get that Biden’s furious that Buttigieg stole it from him. But to be honest, Joe, it was garbage to begin with and if somebody steals your garbage, it’s probably less, best to let them go ahead and own it.