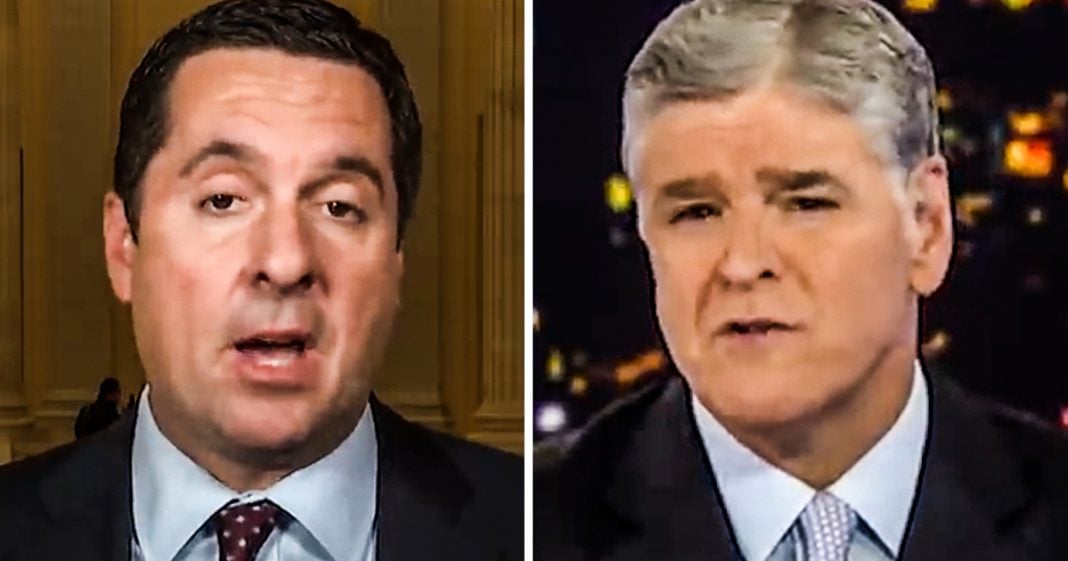 In the Democrats’ Impeachment summary from the Intelligence Committee, call logs were included that show that Ranking Republican Devin Nunes made and received multiple calls from Lev Parnas in April, completely blowing up his defense that he was not involved in the Ukraine scandal. Nunes appeared on Fox News Tuesday evening to defend himself, but even that didn’t go well for him. Ring of Fire’s Farron Cousins discusses this.

Farron Cousins:                  For the last couple of weeks, Devin Nunes has insisted that he did nothing wrong with this Ukraine scandal. He was not involved in any of it, doesn’t know the major players. And then yesterday, Democrats on the house intelligence committee released their report on the findings so far and in that report they included some call logs from Devin Nunez himself. And it turns out that those call logs have absolutely destroyed Nunes’ defenses and completely implicated him in this scandal. These call logs show that in April, right around the same time that they were trying to figure out how to fire former ambassador, Maria Bonovich, Devin Nunez received calls and even made a call to Lev Parnas, the indicted buddy of Rudy Giuliani, who also appears on Nunes call logs. In fact, within the span of about an hour and a half, Nunes made and received multiple different phone calls from both Lev Parnas and Rudy Giuliani. And then of course there’s Giuliani’s phone records that came out as well showing he was also making calls to the office of management and budget. He was making calls to Lev Parnas and of course Devin Nunes. So Nunes is now as implicated in this whole scheme as Lev Parnas and Rudy Giuliani and of course by extension Donald Trump. But Nunes doesn’t see it that way. Nunes isn’t even so sure that he has spoken to Lev Parnas as he told Sean Hannity on Fox news last night. Here it is:

Devin Nunes:                       You know, it’s possible, but I haven’t gone through all my phone records. I don’t really recall that name. I remember that name now because he’s been indicted. But why would CNN rely on somebody like this? You know, and I’ll go back and check all my records, but it seems very unlikely that I would be taking calls from random people. Like I said, we have a process, standard operating procedure. You call my office or you call me or you see me out on the street.

Farron Cousins:                  Now, to me, one of the interesting things is that Sean Hannity starts off by saying, Lev Parnas or whatever his, as if he’s never heard of him. Like, no, you know who this guy is. The guy had 14 burner phones on him, that they’ve confiscated. I’m willing to bet, we’re probably gonna find a call in there to Sean Hannity at least at some point. You know who this guy is, Sean, so don’t act like, oh, well, whatever his name is. Nunes, do you know him? And Nunes is like, ah, maybe. I don’t know. I’d have to look at the call logs. I guess. Really? We, we looked at the call logs. We all have access to the call logs now, Devin. What do you think? What, what are you trying to cover up here? Why are you pretending like we can’t see them? If we have them, you have them.

You can go look at the report and see that, yeah, Lev Parnas called you and you called Lev Parnas. That’s a thing that happened that has now been verified, but he’s going to continue to lie about it. Here’s what needs to happen at this point forward, Democrats need to launch a separate investigation into just Devin Nunes. I don’t even want him roped into the impeachment thing. I think a separate investigation into Devin Nunes is now warranted. We have the evidence, we have him directly implicated in this scheme, but because he’s a member of the house of representatives, he cannot be impeached and therefore should not be included in the impeachment investigation. We need a separate one into him to be able to sell it to the voters in his district that this guy is corrupt as hell, and is probably guilty of the same crimes that Rudy Giuliani is.