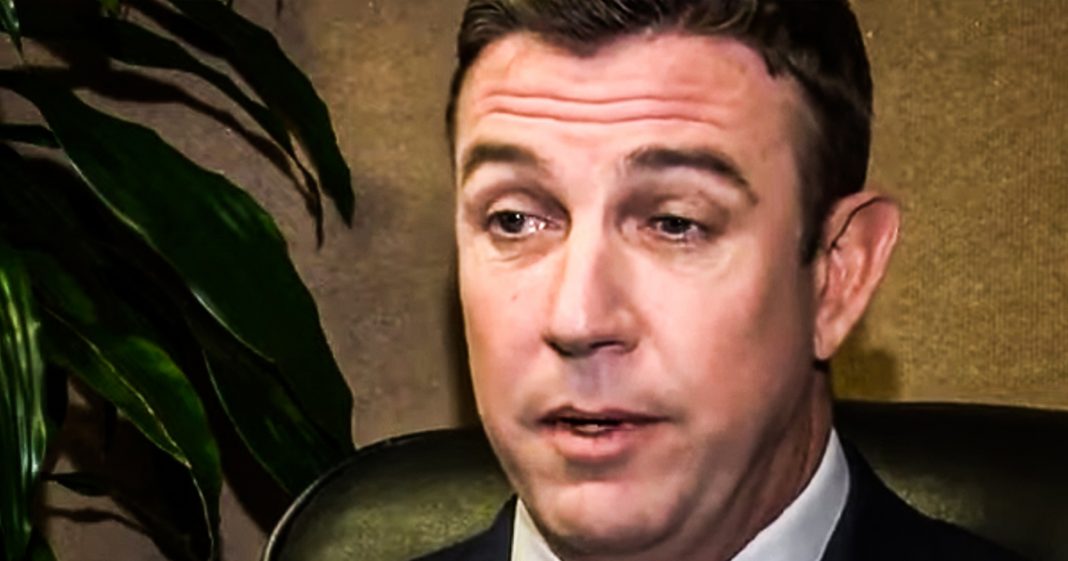 Everyone who chooses to throw in their lot with Donald Trump pays a hefty price. Republican Representative Duncan Hunter has decided to plead guilty to campaign finance violations after spending the past year claiming that he was the victim of a “witch hunt” because he was one of the first members of Congress to endorse Donald Trump. The truth is that Hunter and his wife had been using campaign funds to pay for all sorts of items, including Duncan’s affairs. Ring of Fire’s Farron Cousins explains what’s happening.

What does it say about Donald Trump and the Republican party when the first two members of Congress who publicly came out and endorsed Donald Trump in 2016 are both headed to prison. Obviously one of them, Chris Collins, a pleaded guilty couple months ago to insider trading. He was a Republican representative going to be going to jail. And then today, representative Duncan Hunter decided to switch his plea from not guilty to guilty of the crime of misusing his campaign funds. Now a couple of weeks ago, his wife had pleaded guilty to the same crime cause she was in on the scheme with him. They took their campaign funds and did all kinds of crazy things as Huffington post point outs. The couple used campaign funds for a wide variety of family expenses, including flying their pet rabbit around. Hunter also used campaign money to fund his extra marital fairs. So after more than a year, cause these uh, charges came out, I believe August of 2018 against Dunkin Hunter after more than a year saying this whole thing was a witch hunt. It was all because he was one of the first to publicly come out and endorsed Donald Trump from the house of representatives. Duncan Hunter finally says, you know what?

Yeah. All right, I did it, but, but folks, I didn’t use any of your tax payer money, money to fly my rabbit around. That was just my campaign money. All those golf shorts I bought. Yeah. That was just campaign money. Trust me. It wasn’t your tax dollars, so really, I mean it was just my money, but I guess, yeah, I’m guilty also. Yeah. I had affairs with like three or four different women that I had to, but whatever. It was my money and here is what Hunter had to say. He says, whatever my time in custody is, I will take that hit. My only hope is that the judge does not sentence my wife to jail. I think my kids need a mom in the home. They do, but at the same time, isn’t mom also an admitted criminal too? I mean, yeah, kids need a mom, but they need a mom. That’s going to be a good role model. A mom that’s going to be a nurturing, caring caregiver, not somebody who, Oh kids. You should’ve seen it back in the day. Fly in the old rabbit around using all these campaign funds, breaking the law left and right.

Yeah. Your dad was out there diddling every woman he met, but those were the good old days. Kids. No, I’m sorry. The kids needed better role model, a better person to care for them. Then two admitted criminals. Sorry. That’s just my point of view on that particular stance, Hunter. But here’s the thing, Duncan Hunter did say that he decided to change his plea from not guilty to guilty. Not because he suddenly realized, Oh wait, I did commit the crimes. No, cause he didn’t want his kids to learn all the dirty little secrets that would have come out in a public trial, which would have focused extensively on of the affairs. So we wanted to keep that hidden from his kids. But let me tell you something, Dunkin, eventually your kids, I don’t know how old they are now, maybe they’re old enough to do it now. They’re going to Google you. They’re going to look at your Wikipedia page. They’re going to go through the newspapers and see what happened. Why did daddy disappear for a year and a half?

And they’re going to find out. Why not go ahead and be honest and forthright with those kids right now? It’s going to be tough and they won’t understand it, but that’s going to be a heck of a lot better than coming back 10 years later and your kids walk up to you and say, daddy, what the hell did you do? At least let them know a little bit now. So they kind of understand that daddy’s a criminal, but maybe Danny can change. Same thing with mommy, but if you just leave it to them to go to scupper this on their own, five, 10 years down the road, you’re going to end up with some very serious problems with those kids that could have been easily avoided had you and your wife decided to just be honest for once in your lives.