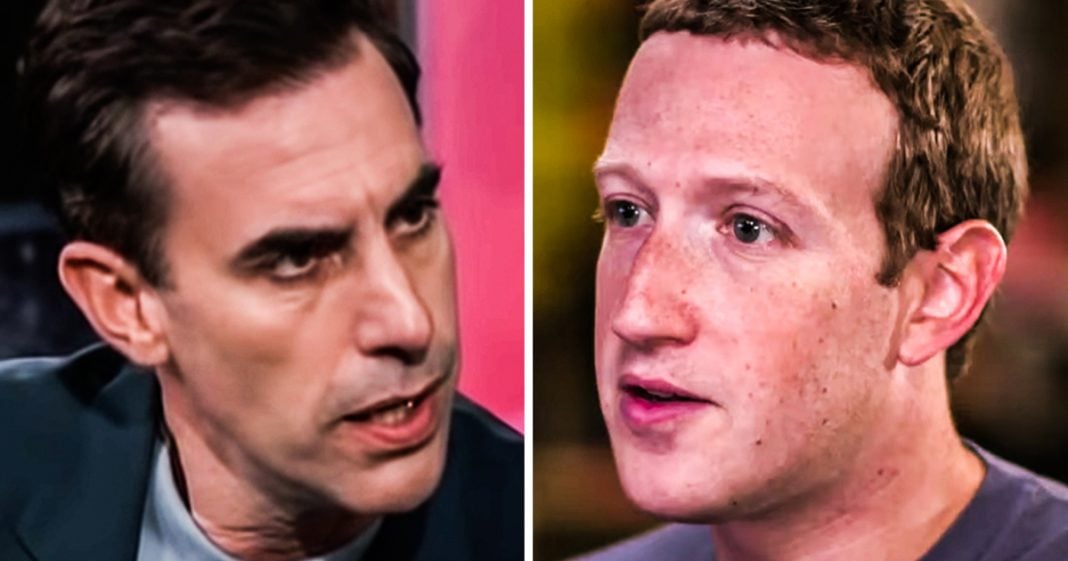 Actor Sacha Baron Cohen took aim at Facebook CEO Mark Zuckerberg on Twitter after Zuckerberg claimed that people can “judge for themselves” the content of political ads and that his company won’t be fact-checking them. Cohen pointed out that this is propaganda, not political advertising, and that Zuck is happy to collect those checks even if he destroys political discourse. Ring of Fire’s Farron Cousins discusses this.

Recently during an interview on CBS news, Facebook CEO, Mark Zuckerberg said the following, he said, I don’t think that a private company should be censoring politicians or news. I think people should be able to judge for themselves the character of politicians. Now this is obviously with regards to the ongoing dispute, kind of that Facebook is having their employees want Zuckerberg and the higher ups to acknowledge the fact that politicians are buying propaganda on their website and putting it out there and they’re just allowing it to happen. But Zuckerberg, even though he’s taken off a few ads that are critical of him or Facebook says that, no, no, no, no, no, we’re not going to do that. That would be censoring speech and that’s not our business. Our business is money. Sasha Baron, Baron Cohen came out yesterday after this article came out about his CBS news interviews, Zuckerberg CBS news interview, and Sacha Baron Cohen came out and said the following on Twitter, he said, no, Mark, it’s not that complex.

Let me simplify again. You and Facebook take money from politicians and run their ads, even if they’re not true. Without fact checking them. That’s not democracy. That’s you profiting off propaganda. And to be honest, this is probably the best and most succinct way I have seen to say this because that is exactly what is happening over at Facebook right now. If you’re not going to fact check these ads, if you’re going to allow politicians to go out there and slander others with these ads that are untrue, which is what’s happening then you’re not news. You’re not even a platform for advertisements. You’re a propaganda outlet and Sacha Baron Cohen nailed it because Mark Zuckerberg is more than happy to cash those checks. He loves getting all that advertising money coming in, especially considering the fact that 2020 could end up being across the board the highest amount of money ever spent on elections here in the United States and Facebook is a massive platform and they want as much of that advertising money as they can get and that’s why they’re going to let anything fly as long.

Of course as it’s not critical of Zuckerberg or Facebook, those surely those would be taken down. But if you want to go out there and slander your opponent, go for it. Facebook doesn’t care if you want to go out there and lie to people about the issues have added. Facebook doesn’t care after all what you’re going to do. Turn to Twitter. No, because they’ve banned all political or advocacy ads. So you can’t talk about it on Twitter, but you can lie about it all day on Facebook. Why can’t we have any of these companies just the right thing in saying, yeah, sure you can buy ads on here, but I’m not going to let you slander or libel others. So we’re going to fact check them. And if it turns out it’s inaccurate, we’ll let you know. You will have the opportunity to fix it. And if you fix it, we’ll run it. If you don’t, we won’t. Literally that simple. That’s how simple it would be for Facebook to do this.

That’s how simple it would be for Twitter to do this, but they won’t because that requires a little bit of effort. And even though they’d pull in millions upon millions, upon millions of dollars in political ads, they don’t want to spend the money to hire a couple new people as full time fact checkers for the campaign season, even though they would still again, make hundreds of millions of dollars proper, uh, probably off of this. So instead Zuckerberg chooses, is Baron Cohen pointed out to profit off of propaganda. Because for Zuckerberg, whatever it was, he used to be, the only thing he cares about today is how much money he can make.