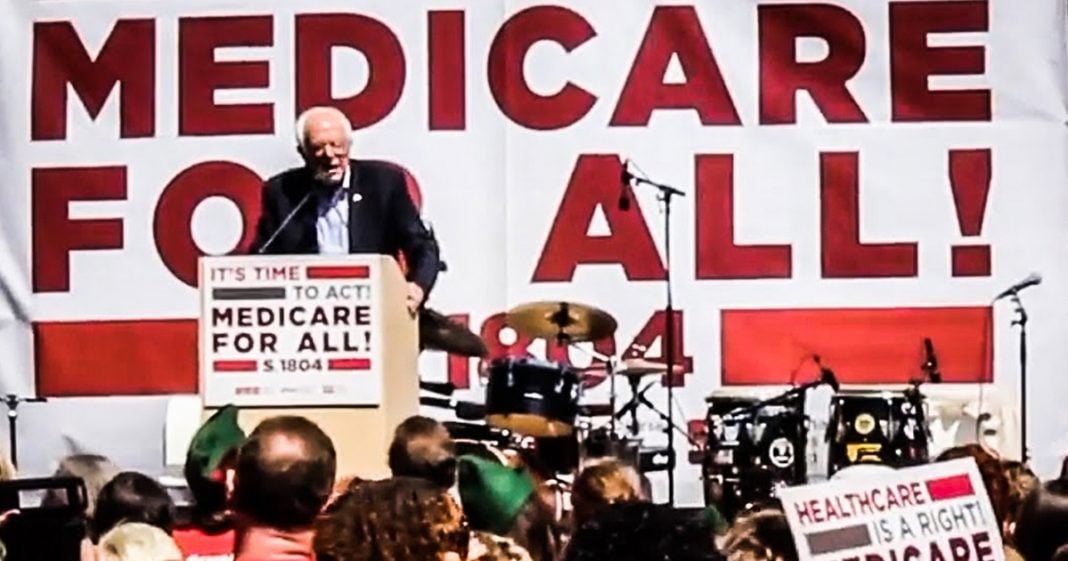 Three state lawmakers, two Democrats and one Republican, have now admitted that a lobbyist for an “undisclosed client” either wrote portions of their anti-Medicare for All op-eds, or he made significant revisions to them. Ethics aside, this is the kind of propaganda that we will have to fight hard against in order to get the healthcare system that this country desperately needs in order to survive. Ring of Fire’s Farron Cousins discusses this.

Three state lawmakers, two Democrats, one Republican have now been forced to admit that. Yeah, a health care industry lobbyist helped write their recent op-eds attacking single payer healthcare and Medicare for all the law makers include Montana state representatives, Cathy Kelker and John Jen- Gross, excuse me. Uh, both Democrats both from the state of Montana. Uh, Kelker is a representative. Gross is a Senator and they had their op-eds attacking Medicare for all written by a man by the name of John MacDonald who, uh, was working on behalf of the partnership for America’s healthcare future in MacDonald. According to these, uh, two state law makers actually reached out to them. They didn’t reach out to him. He reached out to them and said, Hey, here’s an idea. How about we write an op ed, you won’t list anywhere in the op ed that I’m writing it for you. You just slap your name on it. I’ll get you in a bunch of papers with it and we’ll take down Medicare for all. Now, the third person is a Ohio state Senator, Steve Hoffman. And he had his anti Medicare for all op-ed written by a woman by the name of Kathleen Deland, who’s a lobbyist in Ohio.

And uh, Mr. Huffman happens to be a Republican. So again, two Democrats, one Republican, all three had their op-eds against Medicare for all written by lobbyists working for the healthcare industry. And we know this to be true because the Washington post got their hands on the emails between these people and uncovered the truth. So here’s the thing, this is the kind of crap we are up against in the fight for Medicare, for all these groups, like the partnership for America’s healthcare, future funded by hospital corporations, big pharma insurance companies. Those are the people fighting back against giving you healthcare against universal coverage for every single person, the rich and the poor alike. They don’t want it to happen because if we do, if we get healthcare for everybody in this country, their profit party that has been going on for decades comes to an end. Suddenly it’s last call for them and they’re left with nowhere to go. Parties over. Folks don’t have to go home, but you can’t stay here. And that’s what they’re terrified of.

For too long, these pigs have been feeding at the trough of endless profits, but now those fig, those pigs a little too fat to move forward and they’ll do whatever it takes to stop Medicare for all from becoming a reality, even if it means lying to the American public about what these plans would actually, the plans by Bernie Sanders, the plans by, uh, the house that they have put forward, the Senate that they have put forward, they’re lying about what these plans would do because what they would really do is put in into the profits, put an end to the price gouging and put an end to the suffering that millions of Americans experience every single week in this country because they either can’t afford their medicines, they can’t afford to go to the doctor. They have to ration their insulin, whatever it is. These people crafting these op-eds, these people funding these little AstroTurf groups, they don’t care about those millions of people. The only ones they care about are the millions who are paying their premiums and finding new ways to screw them over when they eventually get sick too.