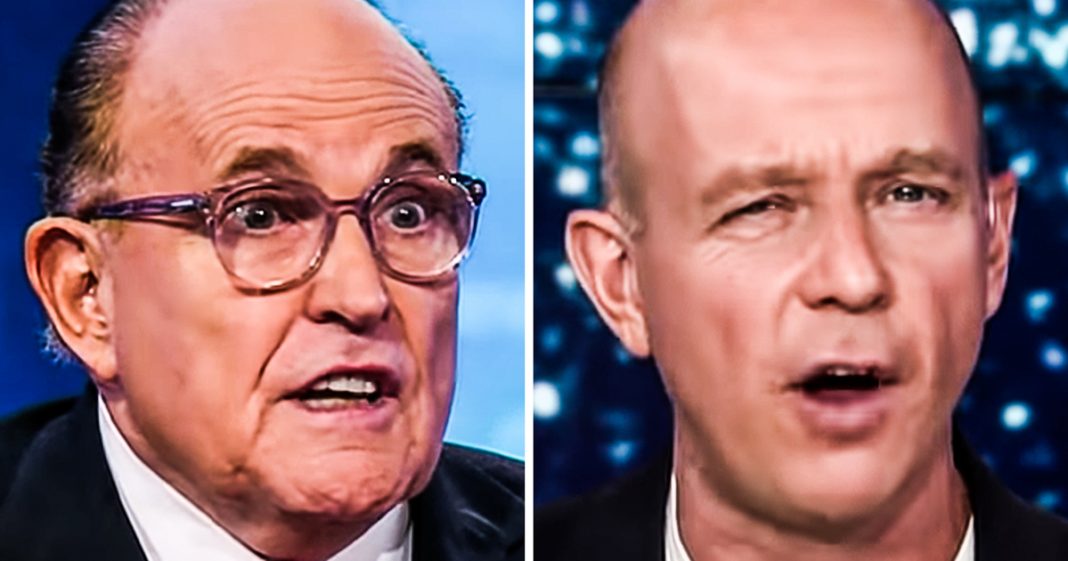 Rudy Giuliani is not happy that Fox News host Steve Hilton called him part of “the swamp,” and he suggested on Twitter that his lawyers want him to sue the Fox News host for libel. But Hilton’s analysis of Giuliani was actually correct, and his presence as Donald Trump’s lawyer is only creating more legal problems for the President. Ring of Fire’s Farron Cousins explains what’s happening.

So yesterday, as some folks may recall, we told you a little story about how Steve Hilton, a Fox news host on his Sunday program, lashed out at Rudy Giuliani told Donald Trump he needs to dump Rudy Giuliani because Giuliani is a part of the swamp and he’s not doing the work of the president. He’s out there trying to enrich himself. Well, I guess after we told that story, Giuliani was still stewing about the fact that mr Hilton wants Donald Trump to fire him and now Giuliani is teasing the idea on Twitter of actually suing Fox news host Steve Hilton for liable. Here is what Giuliani tweeted, lawyers tell me at Steve Hilton Next is a wild card and I should sue him for libel. He recklessly disregarded the truth. Now here is a quote from mr Hilton from his Sunday program. He said there’s a swamp going on with the commercial interest of Rudy Giuliani. He’s going around trying to make business deals out of the Ukrainian situation at the same time as acting for his client. President Trump, he’s trying to make money off his relationship with president Trump.

Now see, as I said yesterday, mr Hilton, I had gone a different route with that. I do believe Donald Trump in his own best interest should dump Rudy Giuliani. But not because Giuliani is allegedly out there making these side deals while also working for the president. No, it’s because of all the crimes. Giuliani has been accused of committing. Right. I mean this guy is under criminal investigation right now facing possibly more than half a dozen different charges and yet Hilton’s only beef with them is that Oh, you are trying to make a deal while you were supposed to be working for the president. You’re are, you’re a bad swampy guy. And Giuliani took that very mild and stupid criticism and is now saying, I’m going to Sue you for libel because that’s what I do. Okay. First of all, it’s not even liable. It’s not even liable. These are things that happened. You haven’t lost any money from it or future employment from it. So you don’t have a case on the merits whatsoever.You cannot sue for liable. I mean you could file the suit. Sure. And the court’s going to immediately say, Hey, thank you for handing me this wonderful lawsuit you filed.

Let me go ahead and file this away for you. That’s what’s going to happen to it. Rudy, because you don’t have a case and mr Hilton to address you again if you’re so concerned about Rudy Giuliani stopped being concerned about the stupid stuff, which is, Oh was he trying to get a new client over there? Guess what? Lawyers tried to get new clients all the time while they’re also working on other cases. If they didn’t, they wouldn’t be in business anymore. Instead, if you want to criticize, Rudy criticized him for walking around and hanging out and taking all those pictures and literally meeting and smoke-filled bars with these two indicted Ukrainian Americans, they’re probably the guys you want to associate him with because they’re going to get popped for several different campaign finance crimes and if you want to paint Giuliani in a bad light, loop him in with a bunch of criminals who are also threatening to take him down now because he was also involved in their crimes.

See how that works. Folks. There is lots of things to go after Rudy Giuliani for, but mr Hilton pick the most mild one to attack him for, but even that little bit of mild criticism was enough to send Giuliani over the edge and threatened to sue a guy who has been a huge supporter and still is of his client. If the whole thing sounds pretty stupid to you, then good. You’re not alone. You’re seeing things rationally. But for the folks at Fox news, including mr Hilton for Rudy Giuliani and for Donald Trump himself, they’re incapable of seeing things through a rational lens. Everything is a personal attack and everything can be remedied with a quick libel suit. To that, I say good luck, Rudy. I hope you do file your lawsuit against mr Hilton because we know exactly how that’s going to end.