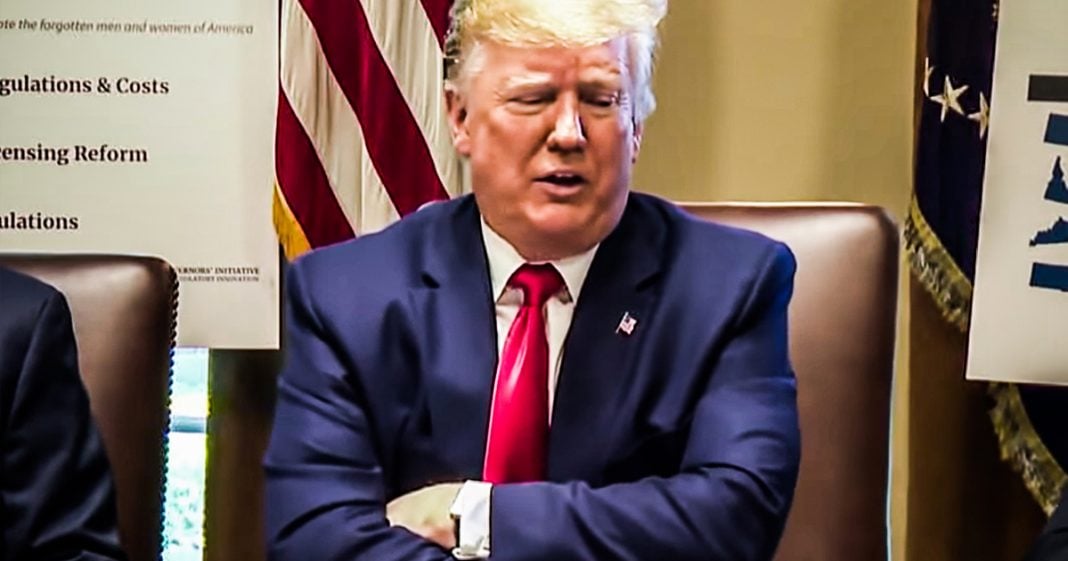 Trump has whined for weeks about not getting representation at the impeachment hearings, so Democrats on the House Judiciary Committee extended an invitation for Trump and his lawyers to come to the next round of hearings. The White House promptly refused this invite because Trump was never actually upset about not getting to be there. Ring of Fire’s Farron Cousins explains what’s happening.

*This transcript was generated by a third-party transcription software company, so please excuse any typos.
For weeks, we’ve been having to listen to Donald Trump attack the impeachment inquiry, saying that it’s baseless, it’s illegitimate, and worst of all, that he’s not getting any due process rights. They’re not letting him go to these hearings. They’re not letting his lawyers go to these hearings. It’s absolutely unfair, according to the president, as recently as a tweet, just this morning, so here’s what’s actually happened. Folks. Uh, judiciary committee chairman, Jerry Nadler actually extended an invitation to the white house saying, Hey, listen, the impeachment hearings are moving over to the judiciary committee this week, starting Wednesday, we would like to formally invite the president or any of his lawyers to come sit in, you know, be a part of this. You say, we’re not letting you do it, so we’re letting you do it. Come on in. We got a seat reserved for you. And on Sunday, white house counsel, Pat Cipollini sent a letter back to Nadler saying, thanks, but no thanks. We will not be showing up. Even though the president has bitched and complained for several weeks that he’s not allowed to be there, nor are his lawyers. So why, right? The president said he wanted to do this thing. He wants his lawyers to do this thing. Democrats say, come on and do the thing, and then Trump just says, no, not gonna do it now. Now that you’ve invited me, but I’m still going to complain and lie to the public saying that you’re not going to let me do the thing. Now, Republicans have allegedly been coaching the president, um, to not go and show up to these or send his lawyers these things because they claim doing so would legitimize the process and then Trump wouldn’t be able to claim that it’s baseless, that it’s illegitimate, that it’s a complete witch hunt. But the truth is, and that may be what changed Trump’s mind. Why he said, okay, you’re right. I’m not going to do that. It’s going to make it look legitimate. But the real reason Republicans don’t want Trump to show up there is because they don’t trust him. Because if he gets angry, he’s going to have an outburst that’s going to happen. If the man shows up to the hearing and they can’t have that because what’s going to happen is that’s going to make him look even guiltier than he already looks. If his lawyers show up, they wouldn’t be able to stop him from doing that. His lawyers really wouldn’t be able to do much of anything other than just sit there, so there’s really no reason for them to go and be a part of this. Republicans aren’t telling Trump to stay away because they don’t want to legitimize the whole thing, which is already legitimate. It’s because they don’t want Trump making a fool of himself and making things so much worse for them. They know that he can sit on his couch at home, watch it on TV, see how proud they’re making him because after all this week, again, it’s going to the judiciary committee in the house. You’ve got Jim Jordan back again on there. You got Matt Gates. Yeah. This is going to absolutely be chaos and it’s also going to be most watched television for a lot of American citizens. They want to see what kind of crazy thing Matt Gates is going to say to defend the president. They want to see what horrible conspiracy theory Jim Jordan is going to push at these hearings. They’ll be tuning in and so will the president and Republicans want it that way. They want him watching from home. They certainly don’t want him watching from inside the room where they cannot predict nor control what kind of reaction he’s going to have.