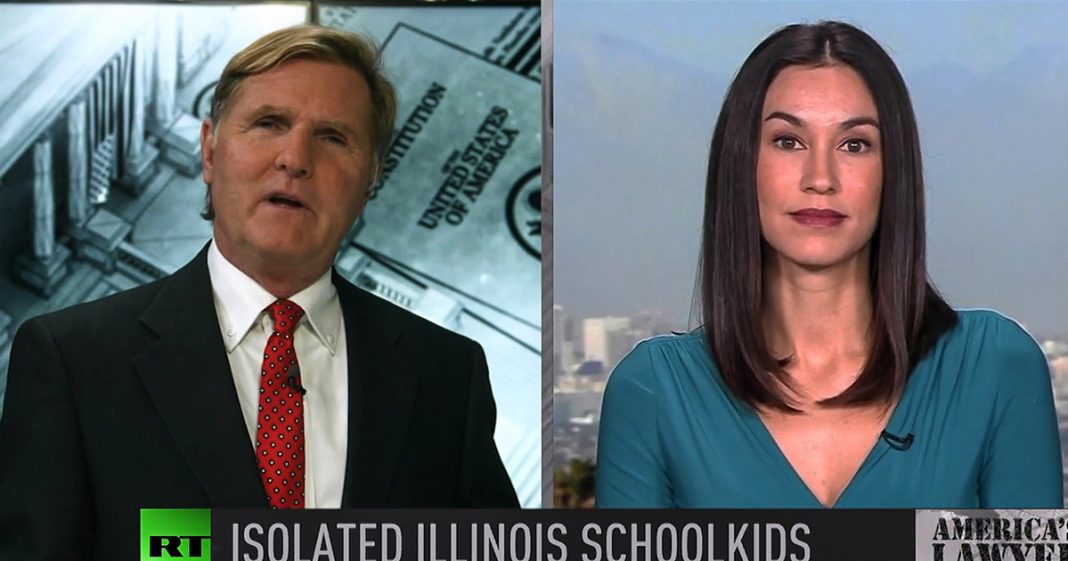 Via America’s Lawyer: RT correspondent Brigida Santos joins Mike Papantonio to explain an Illinois investigation that reveals tens of thousands of schoolchildren, some as young as FIVE, are being unlawfully isolated from their classmates as a form of punishment in over 100 districts, oftentimes for infractions as mundane as spilling milk.

Mike Papantonio:             A new investigation reveals that children in Illinois are being locked away, terrified and alone at schools for reasons that often violate the law. RTs Brigida Santos joins me now from LA to talk about it. First of all, Brigida, why are children being isolated at schools to begin with? What, what’s this story about?

Brigida Santos:                   Well, children are often sent into isolation as a form of timeout. In Illinois, it’s legal for school employees to put children in a separate room if they pose a safety threat to themselves or others. But a new investigation of timeout logs reveals that school workers in at least 100 districts have been isolating children’s for reasons that are not legally permitted, including swearing, spilling milk, and refusing to do assignments, for example. So far, journalists have tallied up over 20,000 incidents between the fall of 2017 through December of 2018. Now, out of those only 12,000 reports were detailed enough to determine what prompted seclusion and in 42% of those cases, no safety concern was even documented.

Mike Papantonio:             You know, ProPublica looked at this and the numbers that they reviewed are startling. You talked about some of those numbers, but what they found was a pretty ugly pattern. And they say they’re supposed to be somebody standing outside the room when these children are isolated in basically padded rooms, taking notes about what’s happening minute to minute. But the problem is nobody’s reviewing those notes. And that brings me to the question, how old are these children and, and how did they react to being locked up? What, what are some of the stories here? Must be pretty bad. ProPublica did an entire exposé on this story.

Brigida Santos:                   Yes, so many of these children are as young as five years old and according to the timeout logs, most of the students who end up in isolation are either physically or mentally disabled or suffer from behavioral disorders like autism. Now because adults are legally required to stand outside the door and write down what happens, as you said, we know that in isolation students have injured themselves while scratching at the windows and tearing at padded walls. They’ve even thrown their bodies against locked doors, hit their heads and gotten bruises. Their hands have bled from banging on the doors and in some cases they’ve even wet their pants. Now the median time that students have been kept in isolation is 26 minutes, but some of these students have been locked up for hours or been locked up on multiple occasions.

Records also reveal the heartbreaking things that some of these kids have said during seclusion. For example, one child screamed, I’d rather die, you’re torturing me, while in isolated timeout. Workers and teachers say that seclusion helps keep everyone in class safe. They also claim that it helps children learn to calm themselves down. But in 2012 the US department of education warned against seclusion saying it’s dangerous and that there’s absolutely no evidence that it reduces behavioral issues and special education experts agree. They say isolation has no therapeutic or educational value and that it can actually traumatize children.

Mike Papantonio:             Well, you know, a lot of States use isolation. I mean this is, I understand this is being looked at right now and it should be with these stories, but it seems like this is a little bit wider than just Illinois. I mean, if these incidents are illegal, why isn’t anybody cracking down on the practice to begin with? I mean, why is this even taking place?

Brigida Santos:                   Yeah, it’s not strictly happening in Illinois. Now, at least 19 States though, have banned seclusion. But there are no federal laws regulating the practice. And even though Illinois school workers are legally required to file those detailed reports about the incidents, no one’s required to read them, which means that state education officials are not monitoring these types of timeouts. People are now questioning whether our tax dollars should fund schools that illegally lock up children. So hopefully this investigation will raise awareness and result in some much needed systemic changes.

Mike Papantonio:             Well, and to me, you can’t miss this. You can’t miss this point about the story. This isn’t just the average child that misbehaves. These children have all kinds of disabilities. They’re mixed up with kids that are also put into these same rooms. So they’re just, just behavioral problems. So this, this goes beyond just trying to correct behavioral problems. These are children that have some real fundamental disabilities and that’s, that’s easy to miss in this story. Anyway, Brigida, thank you for joining me. Okay.