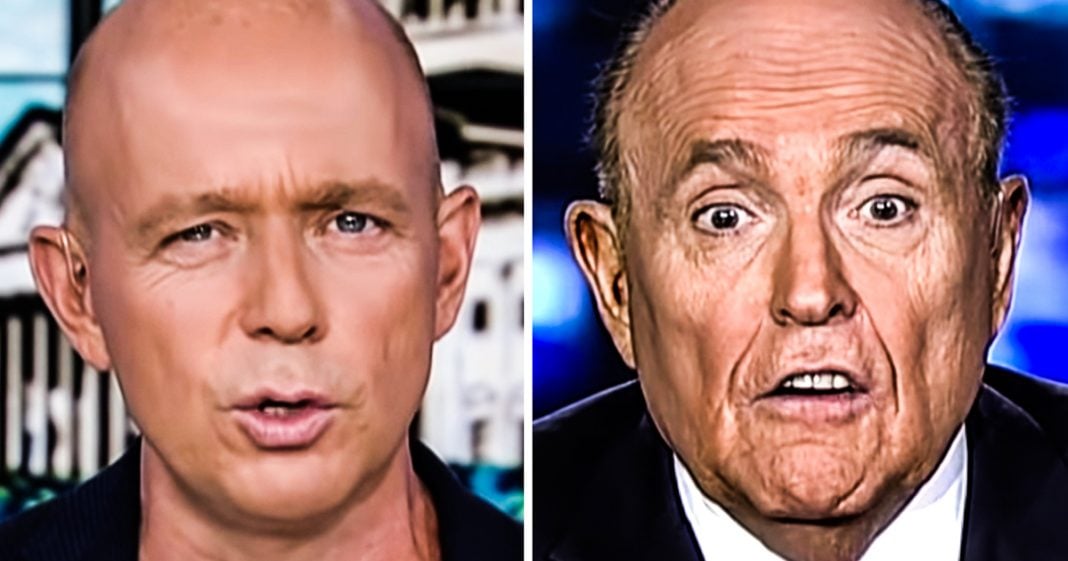 Over the weekend, Fox News host Steve Hilton pleaded with the President to dump Rudy Giuliani as his lawyer, mostly due to the fact that Giuliani is just as involved in all these scandals as Trump is. Hilton isn’t wrong with his assessment, and Giuliani’s presence is going to prove to be toxic for Trump. Ring of Fire’s Farron Cousins explains how Trump’s own lawyer could be his undoing.

On Sunday. Fox news host Steve Hilton on his Fox news show. The next revolution, begged and pleaded with Donald Trump to finally dump his attorney, Rudy Giuliani Hilton called Giuliani toxic. He said he was an embarrassment and he says that he is absolutely dragging Donald Trump down with him. And on those points, I agree with mr Hilton, but it’s the way that we arrive at those conclusions that is starkly different between me and mr Hilton. Here’s what mr Hilton had to say. You know what? I’m just fed up with a lot of them. Rudy Giuliani was a great mayor and a great leader, but he’s turned into an unmitigated and now it seems unethical disaster. While president Trump has been trying to govern for the American people, all these hangers on, I’ve been trying to make money for themselves off Trump. They’ve really led president Trump astray and I’m just so fed up with it. Specifically.

Steve Hilton was talking about a report that surface towards the end of last week, they, Rudy Giuliani had gone over to the Ukraine and uh, asked the former prosecutor, the one that everybody banded together to get fired, said, I’m going to work with you. I can get your, uh, alleged stolen property back from Kiev if you pay me $250,000. So mr Hilton’s criticism of Rudy Giuliani is not because of all the crimes he’s now been implicated in and being investigated for. It’s because he thinks he was using his time when he should have been representing the president to go over there and make money for his group. Giuliani partners, associates, whatever that’s called. Um, Giuliani partners LLC, and that’s his beef with them. So Hilton is not necessarily saying Giuliani did anything illegal. It’s just, Hey, you’re supposed to be helping the president. You weren’t helping him and now you’re bad because of it. Now Hilton, if you hadn’t gone into your horrifying explanation here, I would have agreed with you on all these points, except of course that Giuliani was a great mayor.

No, he wasn’t. But here’s the thing, man. Giuliani is a disaster for Trump. He is an ethical disaster for Trump as you correctly said, but not because he was trying to make money because of all the crimes he’s committed because of all the crimes he helped the president commit. When you’re a lawyer is the one doing the crimes with you? Probably not the guy you want standing next to you at the trial defending you when he is also being investigated for the same dang crimes, but that’s what we’re dealing with with Rudy Giuliani right now up in New York. Those investigations, the man could be facing nine nine different criminal charges and the only thing mr Hilton cares about is that you were trying to make side business deals while you were to be over there digging up dirt on Joe Biden. How dare you, Rudy Giuliani, well don’t worry.

Mr Hilton, I’m pretty sure he was able to do both at the same time and I’m also pretty sure that if Donald Trump keeps him, he’s going to go down the tubes with him. I don’t know who’s going to be dragging who down that toilet tank, but it’s going to be one of them dragging the other down, kicking and screaming. The fun part is that we got to wait and see when this all ends. Who’s gonna be which person? Personally, I can’t wait cause I know Donald Trump is not going to dump Rudy Giuliani. Giuliani is not going to turn on Trump as long as he doesn’t dump him. But then again, Giuliani doesn’t have to turn on Trump. He’s already given us a lot of really good information and evidence because he’s just a really bad lawyer. So as long as he keeps doing that, we don’t need to worry about whether or not he’s going to flip, because that moron has already flipped multiple times without even realizing it.