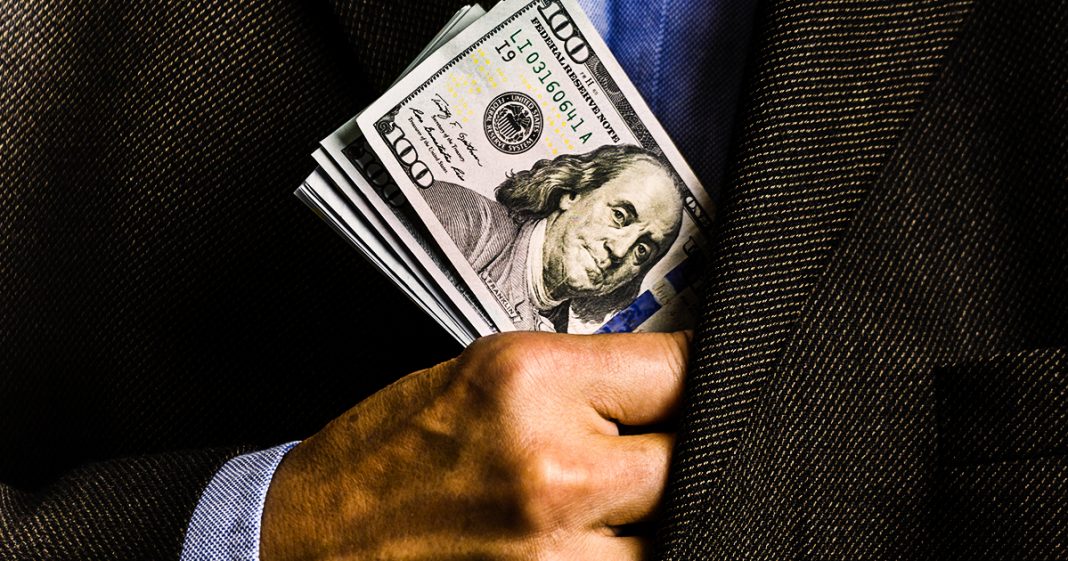 Over the last 10 years, the top 400 richest Americans have seen their share of the total wealth of this country more than double, and they currently control over $3 trillion of the wealth of this country. At the same time, their tax rates have continued to drop. Economists are finally telling us that this isn’t a coincidence, and the increasing concentration of wealth at the top couldn’t happen without these tax cuts. Ring of Fire’s Farron Cousins discusses this.

*This transcript was generated by a third-party transcription software company, so please excuse any typos.
You know, every day I sit here and I do videos and I assume that not a single person watching these is in the top 1% of income earners here in the United States. If you are, congratulations to you, good job. But what I’m definitely positive of is that nobody watching these videos as a member of the top 400 wealthiest people in this country, and that’s probably good cause what I’m about to say is not going to be very kind to these 400 people according to a new report, the top 400 richest people in the United States have seen their wealth more than double since the year 2009 so the last 10 years, the combined wealth of the top 400 people has more than doubled from $1.27 trillion to $3 trillion today. And at the same time their tax rate has actually fallen to a level to where now they pay a lower percentage of tax than the working class people. For the first time ever in the history of American taxes, the workers, me, I pay a higher percentage of my income in taxes than the top 400 income earners here in the United States. And those 400 people combined control $3 trillion worth of the money here in the United States. $3 trillion between those 400 people. This is why people hate the rich, right? This is why people are making the jokes about sharpen up those guillotines grabbing out the pitchforks and the torches because of stories like this. But here’s the kicker, folks. It’s not just that these people are getting richer and paying a lower percentage of taxes. Oh no. Economists say that the reason they’ve been able to amount so much wealth over the last decade, it’s actually because of all the tax breaks they’ve gotten. Oh, and here’s another kicker. The Trump administration is actively considering passing another tax break, which they’ve already admitted would most likely help the rich mostly prior to the 2020 presidential election. So they want, they want to cut their taxes even more. They’re already paying less than the rest of us and they want them to pay even less. Oh, here’s the third kicker to this money that they’re amassing because of these tax breaks. Yeah, it’s not trickling down, but we already knew that they’re not reinvesting it into their own businesses, but we already knew that they’re just sitting on it. They’re just accumulating wealth, whether it be in the stock market, whether it be just sitting in a bank or whether it be in the form of buying new mansions in Jetson real estate, all of which have value, but it’s not going back into the economy in any meaningful way. It’s simply isn’t. Instead, they just sit there, watch their net worth tick upwards and upwards. While the rest of us struggle to get by and wonder which bill this month, we may not be able to pay. Wonder whether or not we should even go to the emergency room because of serious injury or illness, because we don’t know if we can afford that bill. Meanwhile, we’re still paying a higher percentage of our incomes and taxes than these top 400 people who have seen their wealth double in the last 10 years.