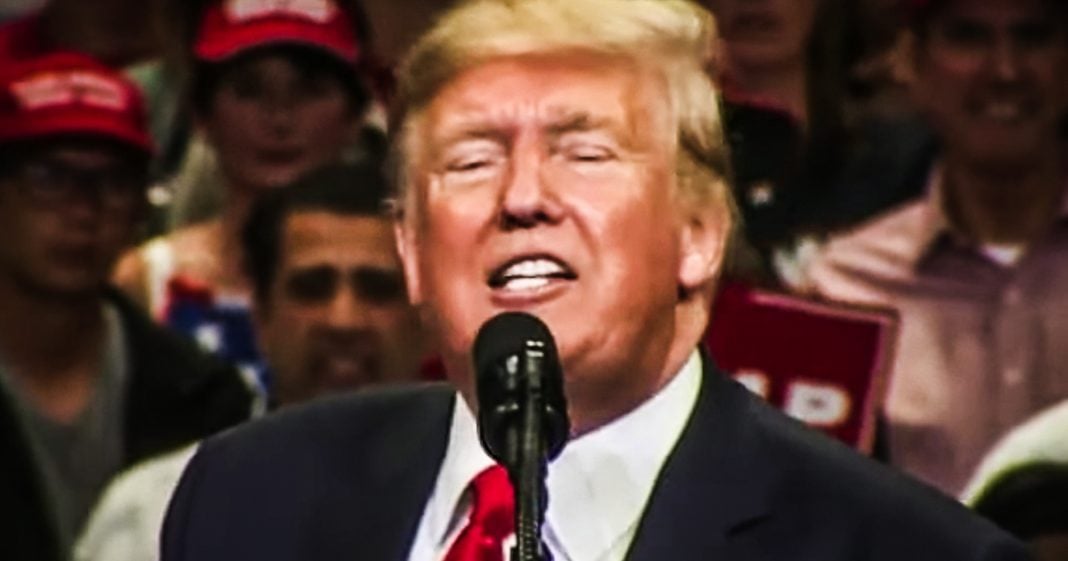 Donald Trump has told his aides that he wants the war criminals that he has pardoned to campaign with him for 2020. Not only would this be a slap in the face to the military, it would be a celebration of rule-breaking. That is what this administration has become, and they aren’t afraid to let everyone know it. Ring of Fire’s Farron Cousins discusses this.

*This transcript was generated by a third-party transcription software company, so please excuse any typos.
Well, happy Thanksgiving, everybody. The president wants to campaign with war criminals. According to recent reports, Donald Trump has actually thrown out the idea to his staff to have one, two, or possibly all three of the recently pardoned war criminals. Join him either on the campaign trail at his rallies, or perhaps have all three of them join him on stage during his renomination at the 2020 Republican national convention. These are three people, military members who had either been accused of or been convicted of war crimes. All three of them killed innocent unarmed civilians. Donald Trump pardoned all three. I know we’ve all seen the drama that’s unfolded, uh, with Navy secretary Richard Spencer resigning slash being fired because he didn’t like this plan. The Pentagon right now is furious at Donald Trump for doing this. It is a huge slap in the face to the military and Trump’s not done yet. No. These three men who murdered civilians, that’s what they did. It was murder. It was straight up murder. Trump thinks it’s a smart idea to go campaign with these people, to bring them up on stage at his rallies. He referred to them on Twitter as our war fighters, not as soldiers, not as protectors of the United States war fighters. They’re toys to him. They’re props. Not just the bad ones, but the good ones as well. You know the, the people who actually said, I care about this country, I’m going to go sign up regardless of political beliefs, upbringing, whatever it is, this is what they chose to do. And Trump is treating all of them as if they’re nothing more than mindless killers. So what better way to make that case than to literally go up on stage with a couple of mindless killers that he pardoned for their war crimes. What this would mean if Trump follows through with this, and hopefully there’s enough brains in his administration to tell him this is a stupid idea, but what it would be is a celebration of rule breaking, right? That’s where this entire administration has been about breaking the rules, breaking the norms, breaking the protocols. So why not go have a couple of war criminals join you on stage, right? Let’s just go ahead and seal that deal. Let’s cement what this administration is truly about. Cause it’s not about protecting America its not about protecting the rule of law or even following the law. It’s about doing whatever the heck you want to do. That’s what Donald Trump has become. That is what he’s turned the office of the presidency into and that’s what he’s trying to turn the military into. You know, we have seen horror stories coming out of the U S military since George W. Bush launched his attack against Iraq. We have seen soldiers, us soldiers, torturing, killing, spying. We have seen all of this. We have seen photographs, we have seen videos, they have posted their own videos. That’s what one of these people did after he stabbed an unarmed teenager in the back. That can’t become the new normal. That can’t become acceptable and that absolutely cannot become legal. But unfortunately under Donald Trump’s rule right now, it’s perfectly legal. You know, he’s taken this whole Republican. We’re the party of the troops thing a little too far. Yeah, you can be the party of the troops if you want. You’re actually not. But if you want to claim it, claim it, but you got to draw the line somewhere, right? It’s one thing to stand with the troops, but it’s another thing entirely and a big slap in the face to all of those troops when you decide to stand with war criminals. But unfortunately, that is exactly what Trump has decided to do.