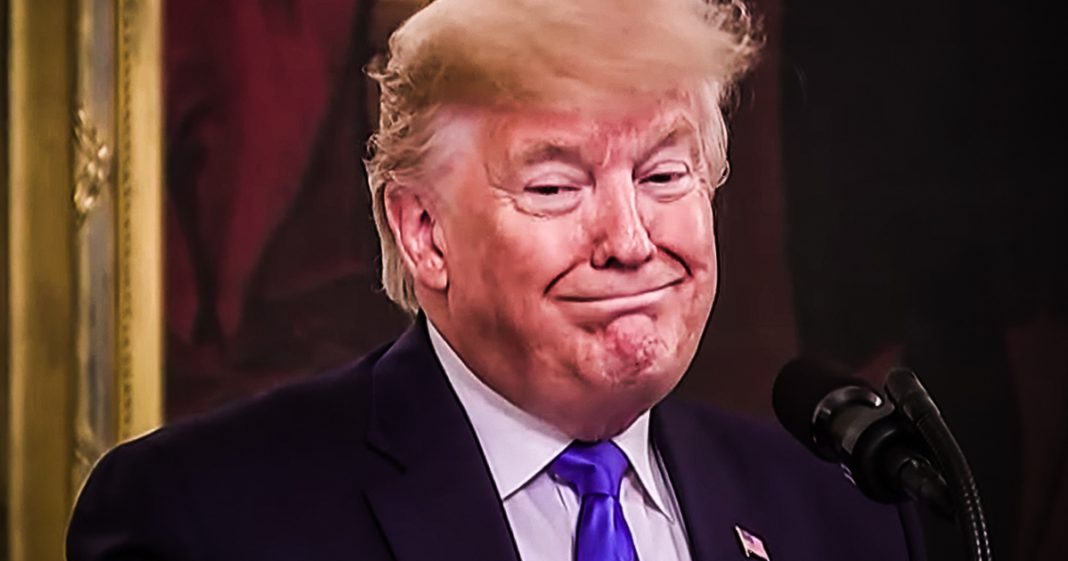 The only decent promise that Donald Trump made during his campaign was that he was going to lower prescription drug prices. It is a promise he’s repeated multiple times since being sworn in, and something that he is constantly attacking Democrats for NOT doing. But the truth is that Democrats in the House HAVE worked on legislation to lower drug costs, but Trump refuses to discusses it with them. Ring of Fire’s Farron Cousins explains what’s happening.

*This transcript was generated by a third-party transcription software company, so please excuse any typos.
One of the only good campaign promises Donald Trump made in 2016 was that if he was elected president, he was going to do something about prescription drug prices here in the United States. Now, few of us believed he was actually going to do this, but at least he said he would. He’s continued to say he would and Hey, that would actually be a good thing for people in this country no matter where it came from. Unfortunately, time and time again, Donald Trump has been proven to be a liar on this issue and he really has no intention whatsoever of actually lowering prescription drug prices, but that hasn’t stopped him from attacking the Democrats for allegedly doing nothing about this problem. Just this past Friday, he tweeted out the following, he said, Pelosi and her do nothing Democrats drug pricing bill doesn’t do the trick. Fewer cures, fewer treatments, time for the Democrats to get serious about bipartisan solutions to lowering prescription drug prices for families. Now, what’s interesting about this is that Pelosi’s office had been working with somebody inside the white house, man by the name of Joe Grogan. He has been working with them for months to come up with prescription drug pricing legislation that the president would support. I mean this, this is his own input. They’ve been working together on this. They put forward the bill and Trump now says, Nope, not gonna do it. This isn’t good. Pelosi’s a do nothing Democrat who actually did something. Now, in all fairness, this prescription drug pricing bill is not that great. Um, all it says is that Medicare will negotiate the prices of up to 250 drugs. So not even all drugs covered by Medicare, just 250 of them. So some of the drugs will be negotiated by Medicare under this bill. So yeah, it’s pretty crap bill. But it’s a crap bill that was designed that way so that Donald Trump would support it. But now we saying he doesn’t, instead he supports a Senate version of this that isn’t going to allow price negotiations with Medicare and drug companies. Nope. Not going to allow that. What is going to do though, it’s going to cap the out of pocket prescription drug costs for people on Medicare. So after you spend a lot in a lot of money after that, it’s okay. We’ll just cover the full thing from there for you. We’ll still pay as a federal government with your tax dollars, the exorbitant markups of these pharmaceuticals, but we’re just, we’re not going to charge the individuals for that anymore. No, no, no, no. You’re okay. Just everybody else that’ll be picking up the tab. So both these bills are awful. Let’s get that out of the way right now. But Trump has no intention of supporting either of these. He’s not going to do anything about drug here in the United States. The man has had what, two years now? Two years to do something about this. He’s done nothing. He’s not going to do anything. Oh, I’m sorry. Almost three years, three years. Two years with Republicans controlling the house and the Senate. One year now with Democrats in the house and Republicans in the Senate they’ve put forward legislation. They’ve worked with his office on legislation. They’ve come up with the most industry friendly bills imaginable. But even those aren’t good enough for Donald Trump. Why? Because if he signs you to destroy, destroys a talking point of his and that talking point is that the Democrats are doing nothing in the house other than working on impeachment. So no matter, no matter what Democrats in the house put forward, no matter the hundreds of bills they have sent that are gathering dust on Mitch McConnell’s desk, he has to be able to paint them as do nothing, Democrats, so his, no nothing Republican base will vote for him and think the Democrats are the ones who are being lazy. The Democrats did something here. The corporate Democrats did something here. It’s not good, but I guess technically it’s better than what we have now, but even that isn’t enough to make Donald Trump actually reach across the aisle and say, Hey, Nancy Pelosi did something. Maybe I should go along with it. Not going to happen. We have very real problems with prescription drug prices here in the United States. People are dying because they literally can’t afford their medications, and Donald Trump is more than happy to let those people die so that he doesn’t have to give Nancy Pelosi credit for actually doing something.