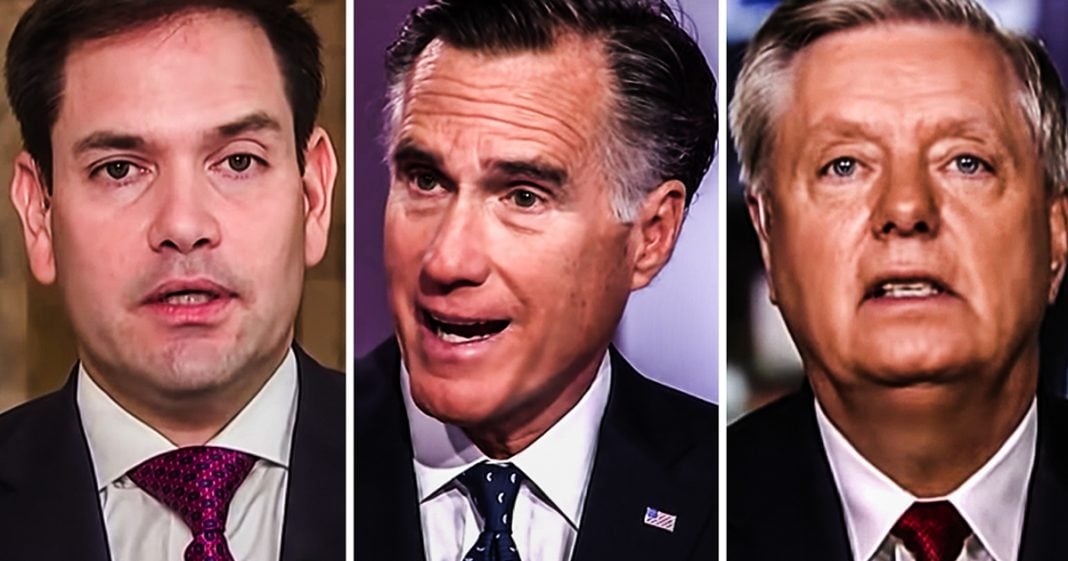 Last month, the Senate created a Climate Solutions Caucus, and true to form, they’ve packed it with Republicans who question the science that tells us that human beings are responsible for climate change. Even though the stated goal of the group is to meet with scientists to get a better understanding of the science, the fact that they are still pulling in money from the fossil fuel industry tells us that they aren’t serious about the task at hand. Ring of Fire’s Farron Cousins discusses this.

*This transcript was generated by a third-party transcription software company, so please excuse any typos.
Last month, the Senate created the climate solutions caucus. Now this is a caucus made up of both Democrats and Republicans, and their goal is to meet with scientists, meet with activists, understand the science behind climate change, and then use their understanding of it and the words of these scientists and people who know what they’re talking about to educate the other members of the Senate. I love this in theory because in practice this doesn’t work, and part of the reason is because Republicans for their part of the caucus have already packed it with people who either don’t believe that human beings are contributing to climate change or simply don’t believe climate change is real at all. And that’s a problem, right? You cannot convince these people at this point that climate change is real. It doesn’t matter how many scientists you parade in front of them. It doesn’t matter what kind of journals you hand them to read. It doesn’t matter if you show them the graphs and the charts and the statistics, they won’t believe that climate change is real. And do you know why? It’s not because they’re morons. It’s because they’re being paid by the fossil fuel industry to pretend that they don’t understand what’s happening. And that actually doesn’t just go for the Republican deniers in this new climate solutions caucus. This also goes for a lot of the Democrats. I want to read an excerpt here. This is from Sharon Jang at a Truthout. She wrote this only one member so far of the climate solutions caucus sign, the no fossil fuel money pledge. And that was Colorado’s Michael Bennet democratic presidential candidate, who is not a supporter of the green new deal. And he’s also the recipient of over $320,000 worth of oil and gas money in his time in Congress. The three, the other three Democrats in the caucus, uh, Jeanne Shaheen, Angus King, and, uh, Chris Coons have received over $200,000 combined from fossil fuel industry. Meanwhile, the Republican members of the caucus have received over $9.5 million combined, $7 million of which went to Mitt Romney alone. So does anybody honestly think that this little climate solutions committee, who between the Republicans and the Democrats sitting on more than $10 million in fossil fuel money, do you think there’s any science that’s going to kind of convince them that those millions aren’t worth it? Do you think there’s any science out there that’s going to tell them that this is a bad idea to sell their soul, to sell their children and their grandchildren down the river? Because there’s not, and we know this because we have been trying to get this done for decades, for decades now, folks, and every time, every time there is a new piece of scientific evidence. Anytime there’s a new report, anytime there is a new warning out there, these same deniers, you’re Marco Rubio’s, who by the way is on the committee. You’re Lindsey Graham’s who’s also on the committee. You’re Mitt Romney’s who’s on the committee. They always come out and say, well, I don’t know. I’m not a scientist. I don’t know how all this works. I don’t know that it’s real. Hey, Marco Rubio’s the guy who said, I’m not a scientist man. Okay, well the scientists told you the thing though. They said this is what’s happening. Almost all of them except for the ones like you, Rubio, funded by the fossil fuel industry. That’s what’s happening here. This is what we call greenwashing. That’s what the climate solutions caucus is all about in the Senate. It’s about making the public think that we’re doing something about it, making the public think that we care about this issue when in reality we’re basically being funded by the fossil fuel industry. That’s what’s happening with this committee. That’s what’s happening with this caucus, and that’s not going to change. The only way you get science denial out of Congress, out of politics is to get corporate money out of politics. As long as the money flows from the fossil fuel industry to the politicians, regardless of party, nothing will change. Not a single thing. We’ve seen the reports, we’ve seen the extreme weather events happening on a monthly basis here in the United States. It’s not like this is a far off threat. We’re dealing with the consequences right now, but money’s talks science walks. That’s what’s happening in the United States today. We can show them every report imaginable. We can force them to read every scientific study on the issue, but none of that, none of that for these politicians is going to be heavier than the weight of that check from the industry that they can’t wait to cash.