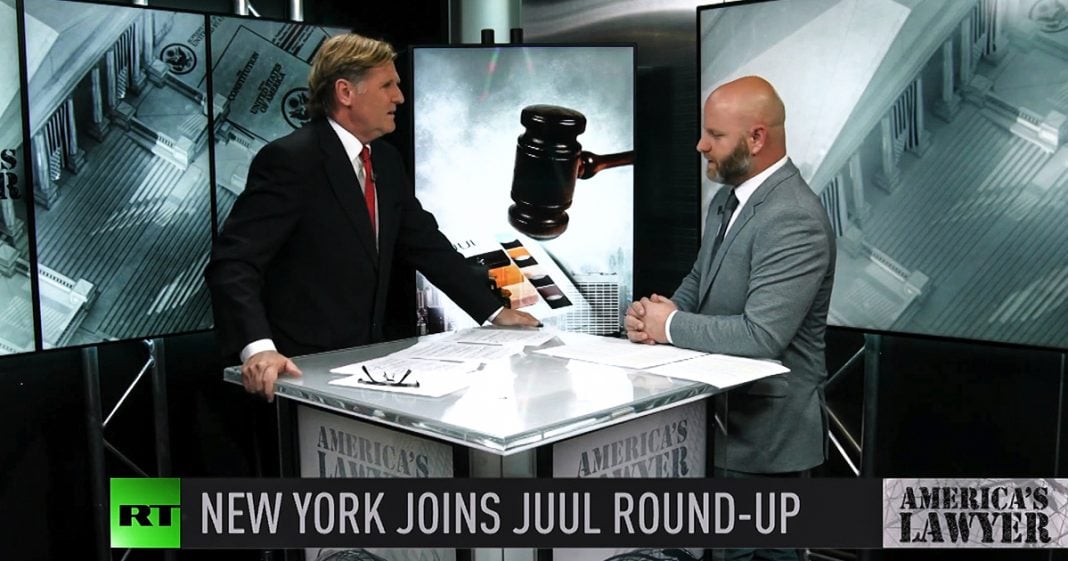 Via America’s Lawyer: Mike Papantonio and Trial Lawyer Magazine editor Farron Cousins discuss how New York is the latest state to file a lawsuit against Juul alleging their marketing practices are directly responsible for fueling the teen vaping epidemic that has swept the country.

Mike Papantonio:             Juul Labs is in trouble, as two massive new lawsuits have accused the company of marketing their products to teenagers to create a new generation of nicotine addicts. I have Farron Cousins from the trial lawyer magazine with me to talk about what’s happening. Farron, again and again, we see the same story, right? Industry comes in, they deny, they deny, they deny, they cover up, they destroy documents, they hide documents. All of a sudden, serious lawsuits are brought by governments. This company’s in big trouble right now.

Farron Cousins:                  Oh absolutely. And I love the way these lawsuits had been filed because this gives these attorneys general, the ability to go in there, go through these documents and find out what they were doing with the marketing materials because that’s where we really need to be looking right now. We know there are growing health issues that is being examined, but we need to find out the marketing and we know they’ve already pulled the, those candy flavorings off the market. But to me, that’s almost an admission that we knew this was candy flavored to attract the teenagers and now we’re going to be able to find out from their own documents if this was actually intentional, which it obviously was.

Mike Papantonio:             Let me tell you the flaw already, that’s developing here, it’s the same flaw that we see time and time again where the department of justice doesn’t do what they’re supposed to do. Okay, now let me, let me run a scenario by you. You have, you have CEOs, you have upward management of companies that have all the information telling them that people are dying from the use of the product and then they want to blame it, well, it’s THC. It’s something else that’s causing the injury when they know that the delivery system itself is part of the problem. Right? Now, if I, if I drink a half a bottle of Jack Daniels and I’d recklessly drive down a road recklessly, not intentionally, recklessly drive down a road and I kill somebody that at the very least is called manslaughter.

Now you and I have talked about this time and time again. When is it that corporate America is going to be held responsible for manslaughter? Because that’s what, that’s what we see here. It’s the same thing that we see time and time again in pharmaceutical cases. Give me your take on that. Why are we so resonant, why are we so, so reticent to say, you know, this is, this is murder? They, they knew what was happening to, give me your take on it.

Farron Cousins:                  I think a lot of it has to do with the fact that all these companies you’re talking about, not just Juul, but the big pharmaceutical companies, the oil companies, the chemical companies, they’re major political players. You know, we, we, we now glorify these CEOs and say, this is what everybody in this country should aspire to be. We’ve put them on such a pedestal that even when they do these things that we know from their own documents, they knew people were going to die. We don’t want to touch them because we still want to think that, no, these people are somehow better than everybody else. They’re also, behind everybody’s back, gonna fund my next political campaign. They’re going to give all this money to my political party and that’s going to help us in the future so we don’t want to touch them. We’ll fine the company, let them write that off in the end of the year, and then everybody thinks that we handled it, but we don’t.