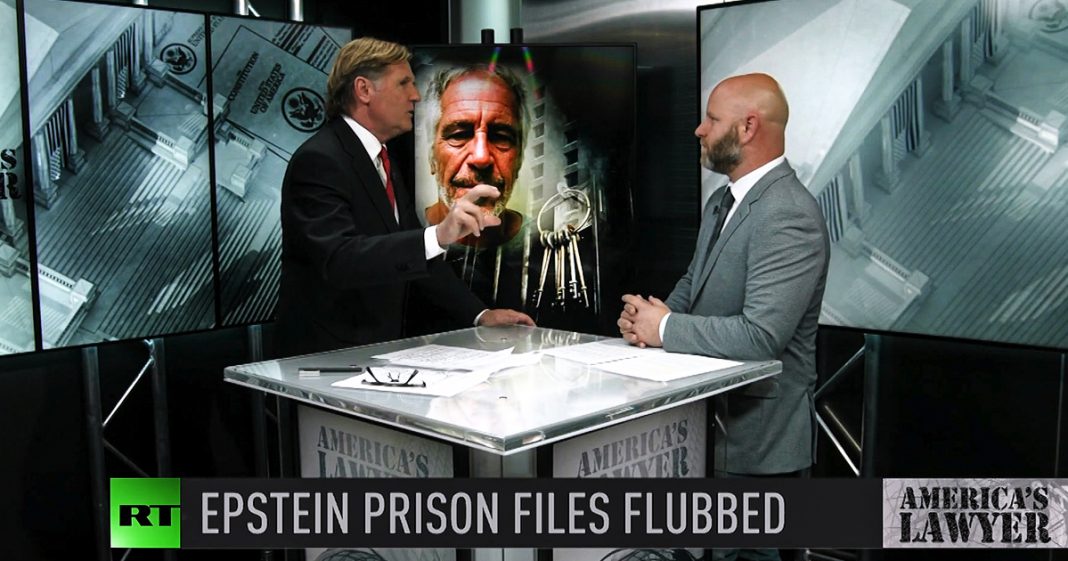 Via America’s Lawyer: Two federal prison guards who were assigned to keep watch of Jeffrey Epstein the night of his death have been indicted for neglecting a series of mandatory check-ups, then fabricating records to cover their tracks. Mike Papantonio and Farron Cousins discuss.

Mike Papantonio:             Two prison guards in New York had been arrested for falsifying reports on the night that Jeff Epstein died in his cell. You know, as this, as you look at this more and more, it’s, it’s pervasive in the prison system, isn’t it? But tell me, lay this story out. Who were these guys that didn’t do their job? Tell us the story.

Farron Cousins:                  You have these two guys and they were in charge of this entire block of prison cells the evening Epstein died. And basically the next morning they came in and the supervisor said, what happened? And the two guards said, listen, we didn’t do any checks on anybody. And so then they went back, almost back in time as it were, took the logs then wrote in that we did do the checks after they had told their supervisor they did not. So it was known they didn’t do the checks, but then they were allowed to go back in and change those logs to say that we did in fact do those checks. They sat there, they were looking on it, the internet. They were reading, they weren’t doing their job.

Mike Papantonio:             Eight hours, they failed to do any check. They’re supposed to do it on a regular system, specially after Epstein comes off a suicide watch. First of all, he never should have been back in that cell after the suicide.

Farron Cousins:                  Right, they didn’t even follow protocol on that. He was supposed to be evaluated by a mental health professional and cleared. They didn’t do this. There is nothing about this story that makes any sense. Even with this, I believe these two guys have become the new fall guys.

Mike Papantonio:             Well, let me, let me, let me talk about that in just a second. We, you know the, the union, the prison guard union is saying, oh gee, we’re understaffed. We can’t do this. You know, a thousand reasons why things are wrong in the prison system and there is no question that that’s true. But in this situation, none of that is relevant because these two people had a very specific job to do, doesn’t involve whether, they were there to do the job. Instead, they were sleeping on the job. They were surfing the internet, they were hanging out in some, in some rec room doing nothing rather than simply doing their job. Now they’re looking at potential five years in prison and you know, where it comes to falsifying records like that, if they’ll do it in a case like this, we’ve seen it. We’ve handled cases in this law firm where people have been, ended up dead in their cell and we’ve seen falsified records. So this, this is a problem they got to solve.

Farron Cousins:                  It, it is, but it also, again, it only raises more questions. If what they’re saying is true and yeah, we simply didn’t go do the checks and then we falsified the records. Okay, well that’s bad enough. You’re going to be punished for that. What else is happening here? Can we get these guys alone in an interrogation room and ask them the real questions? Did somebody tell you to say this? Did somebody tell you to falsify these records? I mean, I, I hate to go into that whole conspiracy.

Mike Papantonio:             Well, you’re not, you’re not the only one raising those issues. I mean, sometimes you’ll hear some, you know, off the wall conspiracy notion, but this is coming from a lot of different angles. These, some of these questions being asked, and I know it all ties together in some form or fashion. But where I look at this story in particular, I really hate to hear the excuse, gee whiz, we’re overworked and understaffed, that, I get it. That probably is true, but it still doesn’t forgive that for eight hours these cats did nothing. Nothing, knowing it, he was a high risk. And the question was always out there. There are a lot of people that wanted to do this guy out.

Mike Papantonio:             Internationally. Exactly. And so I, I don’t know. I look at this story, I don’t buy into the union’s argument. Oh, these poor pitiful guys, they were just overworked. No, they weren’t. You’re there to do a job, do the job, go, at least go in eight hours, go check at least one time they checked nothing. Not one time in that eight hour span.