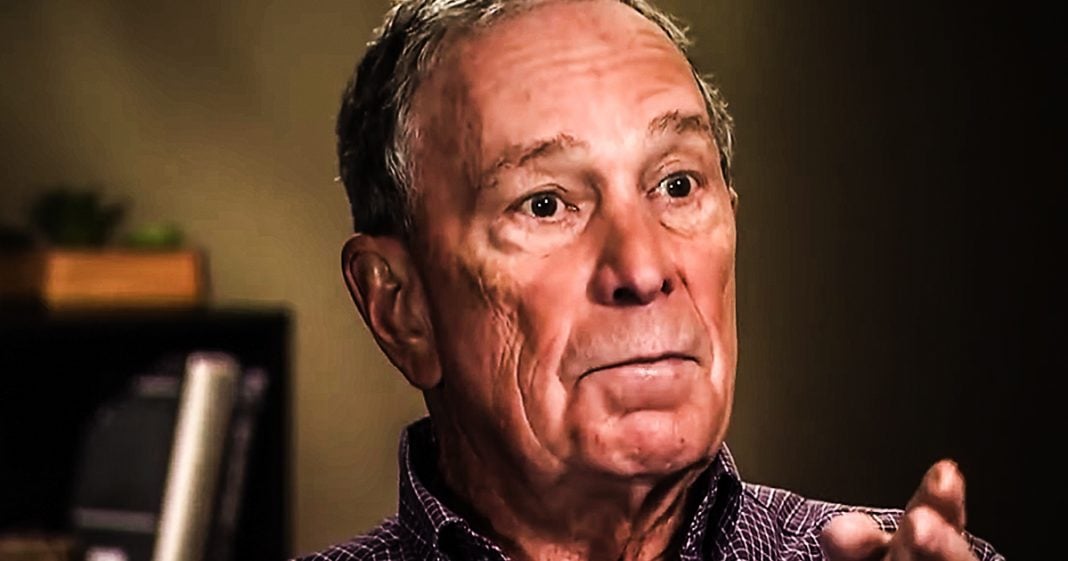 Former Republican and current billionaire Michael Bloomberg is officially running for President, something that nobody asked for but is happening anyway. The last thing this country needs right now is another billionaire thinking that they are skilled enough to run this country, and that they are what this country actually needs. Ring of Fire’s Farron Cousins discusses Bloomberg’s doomed attempt to buy the presidency.

*This transcript was generated by a third-party transcription software company, so please excuse any typos.
Last week, former New York mayor, former Republican and current billionaire and democratic runner for president Michael Bloomberg, announced that he was, uh, uh, purchasing $30 million worth of ads to promote his candidacy for president of the United States. And this is exactly what we’ve all been clamoring for, right folks. We wanted another billionaire in the mix running for president. We only had the one, we only had Tom Stier. We needed a choice between billionaires, or at least that’s what Michael Bloomberg thought in his brain. He thought that this is what the people of the United States wanted. We have a billionaire who’s currently serving as president of the United States and I guess that’s worked out so well that Bloomberg thought, Hey, maybe another billionaire could come in and fix the problems this other billionaire started because he’s so disconnected from the needs of the American public. Maybe I am too, but at least I’m claiming at this point to be on the opposite side of the aisle. Maybe I can hoodwink enough Democrats into voting for a billionaire yet. Not going to happen Tom, or excuse me Michael, but Tom Stier as well. This is also directed at you. This is directed at any billionaire who thinks they can buy their way into the white house because that’s what this is about. That’s what this $30 million ad buy from Bloomberg is all about. Here’s the problem I have right now too, and this is actually about Tom Stier and probably pretty soon in the next couple of days or weeks it’s going to be about Bloomberg as well. The only ads I have seen as a resident living in the state of Florida, the only ad from any Democrat I have seen, and I’ve seen it multiple times, is from Tom Stier. I don’t see advertisements for Bernie Sanders or Elizabeth Warren down here. I’m not seeing mayor Pete ads. I’m not seeing Andrew Yang ads. This is a damn swing state folks. We’ve got a lot of uh, voters here. We’ve got a lot of people. You need to come and schmooze. Where are you, where are you ads? And this is the problem that some of those people are going to run into. Even the ones that I love, the billionaires are going to try to buy this thing and as much as we hate them, as much as we think this is stupid and these are vanity campaigns cause they are, they’re going to beat you in States like this because they know where to go while you have to worry about the early primary and caucus States because you do, they don’t. Bloomberg has already conceded. He knows he’s not going to win, you know, up until maybe even super Tuesday. But at that point it didn’t matter. He can lose the early States focus his massive war chest on the bigger States like Florida or California or Texas, Wisconsin and that could be enough to make him the nominee. Now I have said I will support any Democrat that wins this nomination. I’m in Florida. I can’t afford a protest vote, but I will tell you right now, if it’s Bloomberg, I’m not voting. I’m absolutely 100% not going to vote. If Michael Bloomberg is the nominee, I have never in my life for any office voted for a Republican, and I’m not going to start now. And that’s what Michael Bloomberg is. He is a pro corporate center Republican. He’s not a Democrat. He doesn’t have any answers. He doesn’t have any policies. He doesn’t have any plans. He’s just another billionaire, much like Donald Trump, who thinks that he can buy his way into the white house. And if he thinks that’s enough to win my vote, then guess what? This’ll be the first time in my of age to vote life that I simply won’t be voting for a president.