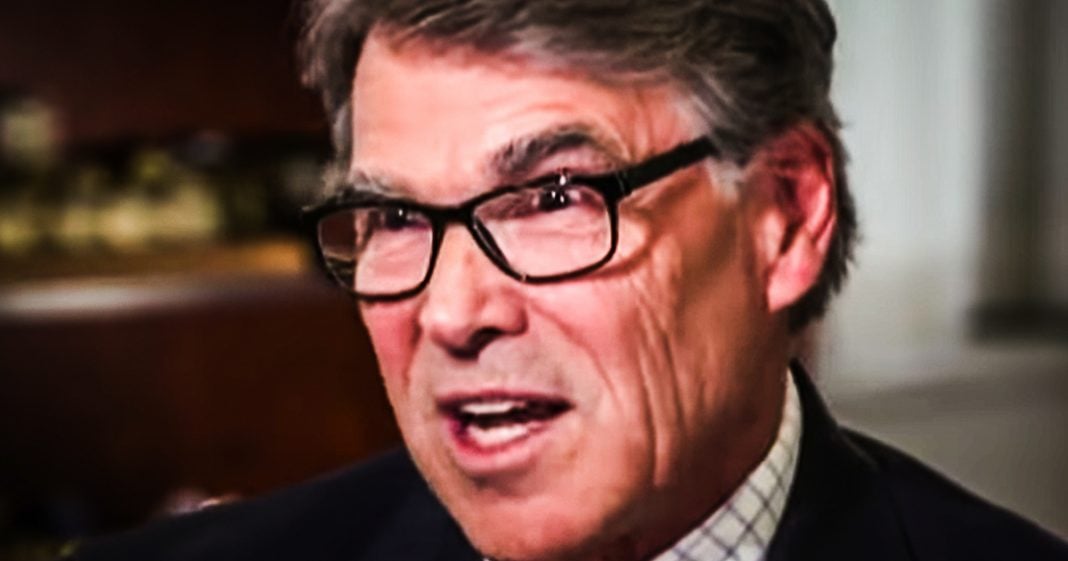 There’s a world of difference between supporting a candidate or a Party and believing that this person/party is infallible is a completely different story. For the most die-hard of Trump supporters, their support has turned into a cult-like worship of him, with Energy Secretary Rick Perry becoming the latest Republican to claim that Trump was “chosen by God.” Ring of Fire’s Farron Cousins discusses the shared psychosis that these delusional supporters seem to share.

*This transcript was generated by a third-party transcription software company, so please excuse any typos.
On Monday of this week, two separate outlets. Previewed two separate interviews with two separate people who at least at one point, were both members of the Trump administration, Rick Perry and Nikki Haley. Nikki Haley’s no longer there. But in both of these interviews, on these two separate networks with these two separate people, both of those human beings said that Donald Trump was chosen by God to lead the United States. Rick Perry current energy secretary said it on Fox news. Nikki Haley said it to David Brody on the Christian broadcasting network that was two people, one of whom still works for Trump and the same day in one week saying that this God they speak of SPO- chose Donald Trump to be the president. Now, here’s the thing. They are not the first two people to make the claim that Donald Trump was sent by God to lead the United States. They probably won’t be the last, but here’s what’s happening at this point. We have repeatedly said, and others have repeatedly said, and plenty of, uh, scholars have written about the fact that these Trump supporters who are this far gone are essentially a cult. Now, I want to go a little bit further now because I’m tired of calling them a cult. I do think there, there’s cult mentality there, but I also think that there is a shared psychosis amongst these hardcore, he was sent by God Trump fanatics, and that’s not your average Trump voter out there. Your person who says, I voted for Trump because he’s a Republican. I voted for Trump because he said he was gonna, you know, fix the economy. Y’all aren’t like that. Most Republicans, most Trump supporters aren’t actually like this. I know we see them all the time on Twitter, but that’s not real life. That’s not representative of what makes up the Republican party. Now, there’s a lot of bad ones. There’s plenty of bad Democrats too. But amongst these people who think that Donald Trump was somehow sent by their God to lead this country, that’s a psychosis. I mean, that’s a symptom. It’s not just a cult. It’s a symptom. These people need mental health. Rick Perry should be in a padded room. Nikki Haley needs to go have a cat scan. There is something wrong with the way their brains function. If they think honest to goodness that Donald Trump was sent by some God to run this country, there is nothing that Donald Trump has ever done in his entire life that squares up with anything mentioned in any version of the Christian Bible. Not one, not a single one, and if you call yourself a Christian, Catholic, Baptist, Protestant, whatever, if you honestly believe in one of those religions and you say that Trump was sent by God, you somehow somewhere along the way lost your way because this man was not sent by any God. This man was not sent by any deity. This man was sent by a corrupted electoral college that was put in place by a bunch of racist 250 years ago because they didn’t want slaves picking the next president. That’s who sent him a bunch of racist from a couple centuries ago, not some deity up in the sky saying, you know what, America has been pissing me off lately. I’m going to send this Trump guy. Let’s see how that works out. That didn’t happen. It was a bunch of racist from the past that gave us a Donald Trump as the president, but again, we are talking about a mental disorder among these people who think Trump was sent by God. This goes far beyond a cult. This is now a diagnosable problem that needs to be fixed because anybody who thinks that God himself sent Donald Trump to rule this country. Yeah, you probably got a couple of demons kicking around in your head that I am sure a good mental health professional would be able to exercise out of there for you.