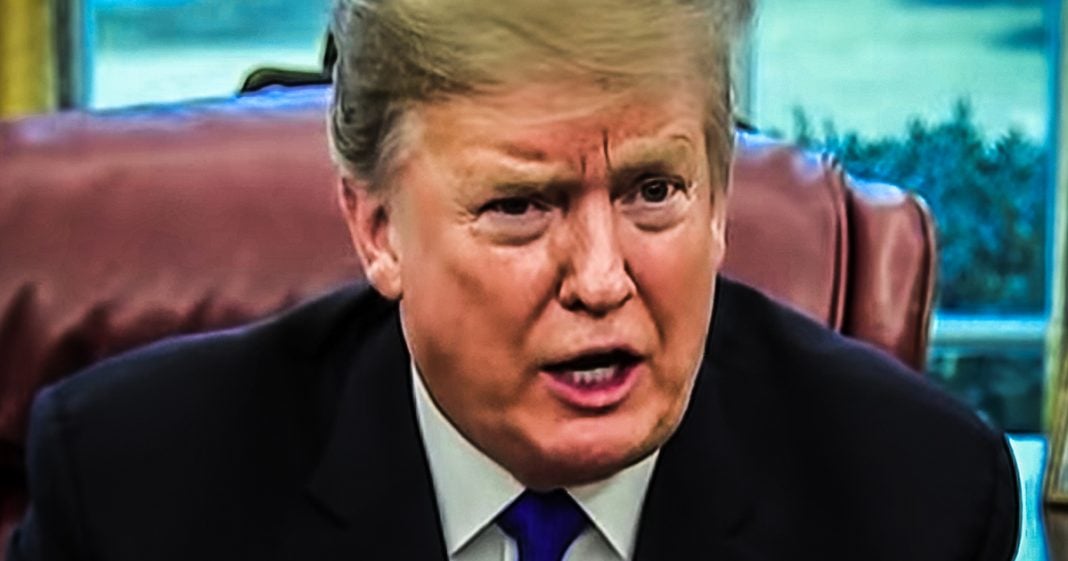 Donald Trump no longer trusts his White House staff, and according to reports, he is isolating himself from them even more than usual. Rather than carrying out his official business in the West Wing, he now conducts most of his “work” in private in the residence portion of the White House. The man is losing what little grip he had on reality, and that’s not something we should celebrate. Ring of Fire’s Farron Cousins discusses this.

*This transcript was generated by a third-party transcription software company, so please excuse any typos.
According to a recent report in Politico, Donald Trump is no longer working as much as he used to inside the oval office and just in general, the West wing of the white house. Instead, staffers are now saying that Donald Trump is choosing to spend more time in the residence portion of the white house and those closest to him believe that it’s because he doesn’t trust his own staff anymore. Here’s how Politico explains it. When you work in the West wing, when you’re working in the oval office, people are coming and going all the time. They walk right in and they knock on the door and they come. They’re always listening. They’re always there. There’s always somebody every time you turn around, but in the residents portion, that part’s off limits. That is technically Donald Trump’s home and they can’t come in there unless he specifically invites them in. In fact, that resident’s portion of the white houses where Donald Trump made his July 25th phone a phone call to Ukrainian president Salinsky because it’s private over there because there’s not as many people come in and go and except for the people he specifically wants to see, so he’s spending more and more time over there. He is still working if that’s what they want to call it. He does still have some people coming in there, but it’s the people he wants to see the average staffers that people just running around making copies, getting coffee, answering phones. They’re nowhere to be found and the reason for that again is because Trump has grown so paranoid that he refuses to be around these people anymore. Now, here’s the problem with this. One of the problems, because there’s many, the first is that if the president doesn’t believe he can trust these staffers with what he says and does, shouldn’t that just raise a bunch of red flags about what he is saying and doing? I mean if he has nothing to hide, if he’s not doing anything wrong, why does it matter if that phone call gets over heard or if the staffer are down the hall, hear’s you say a plan that you’re going to do. If it’s actually a decent plan, right? What are they going to do? Go leak to the press and say, Oh my God, Donald Trump’s going to do a good thing that, that, that that’s not how it works. If you think they’re going to go lie about what you said, then guess what? They’re going to do that whether or not you’re working in the oval office or the residency liars are going to lie in Mr. Trump. I think you know that better than anybody. So this makes no sense. Unless he is doing things and saying things that might not be legal, I guess would be the best way to say that. And to me that seems like the most logical thing. We can come to a conclusion we can come through, right? He doesn’t want people to know what he’s doing. He doesn’t want people to hear what he’s saying. And it’s because those things he’s doing and saying are probably very bad. Now, here’s the other thing though, Trump has to trust his staff. He has to work with his staff. The country does still have to keep running, right? We can’t just shut it down. We can’t just say, well, Trump’s a screw up anyway. He can’t be doing this. No guys, listen, there’s little day to day things that presidents have to do. Security briefings, things like that, you know, keep us safe, make some minor decisions that could have huge ramifications later on down the line. He still has to do that and in order to do that, he has to have the trust of his staff. It has to go both ways. They have to tell him the truth. He has to give them a decent, honest answer about what to do. He has to attend these briefings. He has to listen to the people who know more than him and he’s not, but he’s still making the decisions. That’s what’s terrifying about this. A paranoid president is a dangerous president and that is exactly what we’re dealing with with Donald Trump. And as these impeachment hearings go further, as more and more people come forward and say, yes, the president did a crime, he’s going to become more withdrawn. He’s going to stop listening to everyone in his administration. But again, he’ll still have to make the important decisions that we as American citizens are going to have to live with the consequences of. And that means we are completely at the whim of a crazy delusional and paranoid president.