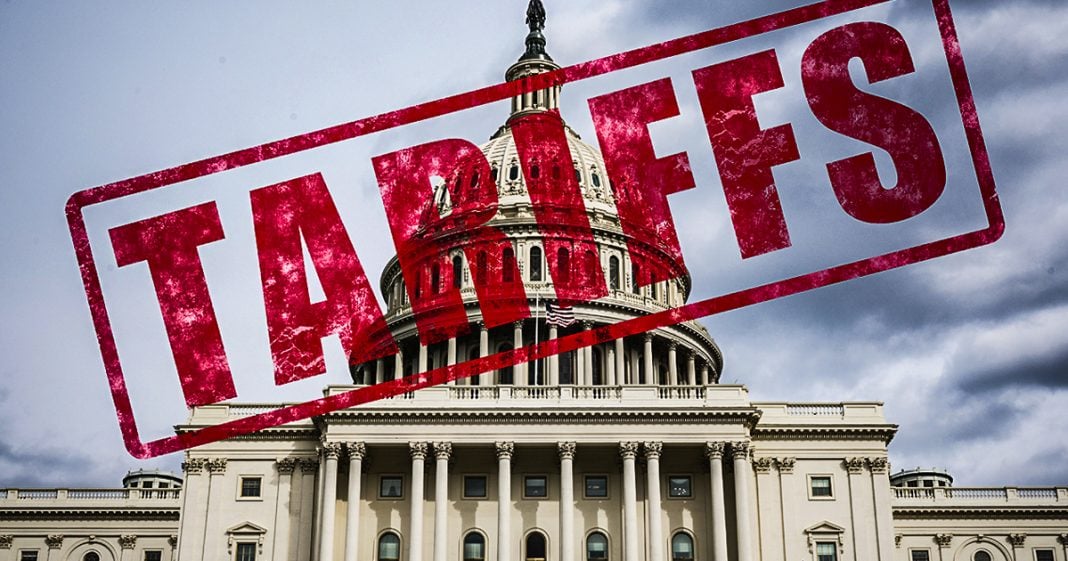 Trump repeatedly tells us that the Chinese, not Americans, are the ones paying his tariffs. But study after study, and reality itself, has proven that American citizens are the ones paying the price tag. And the latest study shows that this price tag has now topped $40 billion per year. Those billions are being lost, when they could be going to other parts of the economy. Ring of Fire’s Farron Cousins explains what’s happening.

*This transcript was generated by a third-party transcription software company, so please excuse any typos.
The New York federal reserve came out with a new study recently that blows a major hole in one of Donald Trump’s favorite talking points, and that is that China is the one paying those tariffs he put in place, don’t worry. American citizens, as he likes to tell us, China is paying those and the treasury is just rolling in that dough that Chinese dough, American citizens, you’re not paying a penny of this, don’t worry about it, but again, the New York federal reserve, the central bank came out and said, yeah, that’s not true at all. In fact, American citizens are paying for the tariffs. They’re the ones picking up the bill and they’re doing it to the tune now of $40 billion per year. That’s $40 billion per year that Americans are paying, not Chinese manufacturers shipping stuff to our country because the New York federal reserve also pointed out that guess what? China hasn’t changed their prices. China’s still charging the same amount, and because of that, we’re the ones having to pay the tariffs. China is not bowing to Donald Trump’s pressure. They’re not lowering prices to compete over here. The only thing that’s actually happening in terms of price differences is that American manufacturers who aren’t even subjected to the tariffs are raising their prices to keep up with the added price tags going onto those tariffed goods. So we’re getting screwed no matter what we do. You buy American well, they raise their prices just because they could. You buy Chinese, you’re paying extra because it’s tacked on with that tariff. Now, China’s doing fine. The U S government itself is doing fine. As Trump says, they’re rolling in that dough. It’s just the rest of us. Everybody else that got screwed out of $40 billion in the last 12 months, that’s $40 billion that could have literally gone to anything else because let’s not forget, these are consumers, American consumers, the working class who are paying these tariffs, everybody else passing it on to us. $40 billion that we could have spent on anything else. $40 billion that would have been re-injected into the economy instead of going and sitting in the federal reserve. That’s, that’s what happened. $40 billion taken out of economic activity, and that’s how we need to look at this. But we also need to stop listening to Donald Trump’s lies, not just about the tariffs, to be honest, quite possibly about every single thing, because that is all the man knows how to do is lie about crap. And that’s what’s happening right now. The federal reserve, the New York federal reserve, excuse me, their, their study that came out this week, this is not the first one to tell us. This is not even the third or fourth one to tell us that we’re the ones paying the tariffs. Economists have been telling us that other studies have been proving that we know this to be true, but Trump’s gonna keep telling the lie, and every time he does go find one of these studies, maybe it’s this one, maybe it’s one of the previous ones we’ve discussed, but whatever it is, find it and send it to them, print it out and send a copy to the white house, copy the link and reply to one of his tweets with it. That’s what I want everybody to start doing. Let’s let him know that we know the truth. It’s not going to change what he says, but it is going to let him know that his lies aren’t resonating anymore.