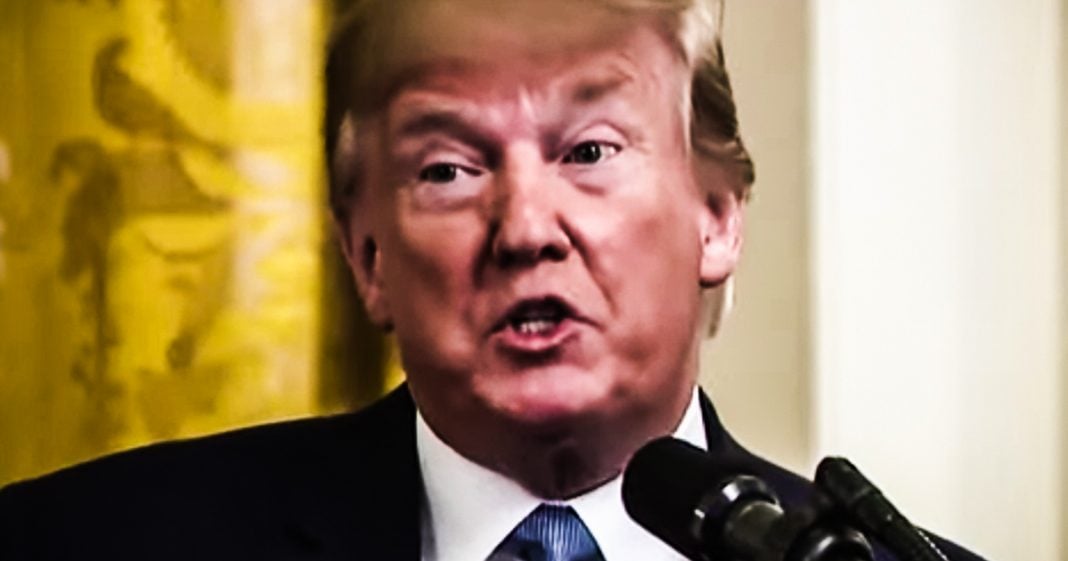 The Supreme Court has given the Trump administration one week to file their case and explain why the President is immune from handing over his tax returns and other financial information to investigators. This is grossly unfair, and likely not a good sign that the Supreme Court is going to do the right thing in this case. Ring of Fire’s Farron Cousins explains what’s happening.

Last week, John Roberts with the U S Supreme court announced that they were issuing a temporary stay in the decision from the lower court to force Donald Trump and his accounting firm to release their financial records, including his tax returns to Democrats in the house of representatives. Well this week the Supreme court extended that temporary stay to December 5th which is next week. And in that one week that the Trump administration has left, they have to file their case with the Supreme court, lay out their argument as to why the Supreme court should in fact hear their case. And at that point the Supreme court will then decide whether or not they’re even going to take it up. So what is this December 5th temporary hold mean? At the moment? Technically nothing, to be honest with you, what it will do is a little bit on fairly give the Trump administration a week or so cause this decision came down Monday. So they had a week and a half I guess to really fine tune their argument. And that’s what this decision, this due date really is about. It’s about allowing the Trump administration a little bit of extra time to make their case while the house Democrats don’t have that same opportunity to explain why they need these financial records. Now again, Supreme court, as we have said, has multiple different options. Uh, one that could be likely is that they simply don’t take up the case for fear of being viewed as partisan one way or the other. But I think what’s much more likely is that the court will take up this case at that. At that point, it’s anybody’s guess as to what will happen. But keep in mind, and I think the judges know this, if you rule that Donald Trump is in fact above the law and does not have to comply with these subpoenas for his financial records, you are setting a precedent, a precedent, excuse me, that every president that follows Donald Trump will be allowed to follow. Which means if we get a Democrat in that white house one day, maybe they do something a little, we’ll ceedy. Maybe they’ve got some financial records that, Ooh, the house Republicans really want to get their hands on so they can impeach him and then they won’t be able to do that because the Supreme court decided back during the Trump years that the president is in fact above the law. See, this case isn’t just about Trump. It’s not about the house Democrats getting their hands on his financial records. It’s about reigning in the power of the presidency so that we do not have a King running this country. That’s what is at stake here at this point. I honest to God, don’t care what’s in those financial records. I don’t care anymore. I don’t care about the Democrat versus Republican fighting. None of it matters. What matters is that we let the president of the United States know whoever sits in that office, present and future that they still have to obey the law, that they have to comply with subpoenas, that they do not have absolute power and absolute immunity. That is what this court case is about, and if they decide to side with Trump and give the president these powers, they are pushing us into a new era here in the United States in era where we no longer have a democratic Republic. We have a banana Republic, we have a pseudo fascist state at that point where the president of the United States can do whatever the hell he or she wants and nobody will be able to reign them in. That is what is really at stake with this court decision to even take up the case again. Maybe they say we’re not going to touch it, in which case, fine, great, good and dandy. Hand over your crap to the house Democrats. But if they decide to take it up and they rule the wrong way, this country is about to go down a very dark path, even darker than the one we’re on right now.