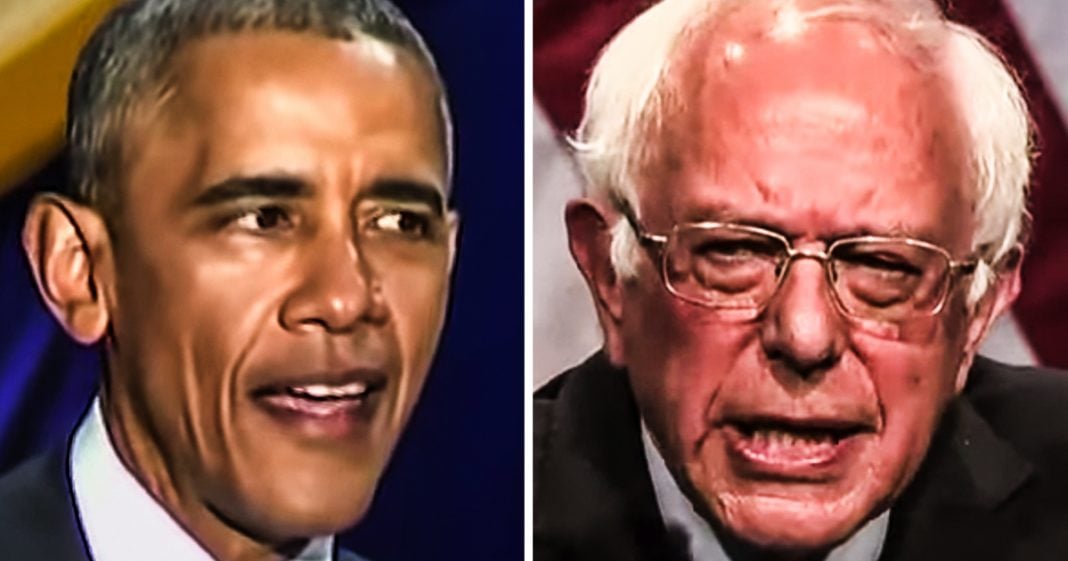 According to a new explosive report by Politico, Barack Obama had said in private months ago that he wasn’t going to intervene in the 2020 primaries…Unless it looked like Bernie Sanders was going to grab the nomination. And sure enough, as soon as Bernie’s numbers started to overtake the others, Obama started speaking out. Never calling out Sanders by name, he has bashed “progressive candidates” in closed-door meetings with fundraisers. Ring of Fire’s Farron Cousins explains what’s happening.

*This transcript was generated by a third-party transcription software company, so please excuse any typos.
Politico has published a, a rather explosive, I guess you could call it article about Barack Obama and why he is and is not at the same time getting involved in the 2020 democratic presidential primary. Because as we all know, Obama’s been kind of sitting this thing out. Political also pointed out that most of the Democrats running for president have had to go and meet with him privately. Why anybody’s guests? I guess it’s just a formality. He was the last democratic president. So you go and you meet with him and you get his advice and you hope to get his approval. But again, Obama stayed silent right up until the last couple of weeks when he started popping up at these donor meetings and attacking Bernie Sanders and Elizabeth Warren. Now he never mentioned either of them by name, but he did refer to the candidates who are a little too far left and talked about these pie in the sky dreams like Medicare for all and debt free college and how bad they are and that we need to be more realistic. So why after months of silence does Barack Obama re-emerge and then tell us that the things we need as a country we simply can’t have? Well, luckily Politico answer that question for us. With this paragraph publicly, he is being clear that he won’t intervene in the primary for or against a candidate unless he believed there was some egregious attack. I can’t even imagine with this field how bad it would be for him to say something. Set a close adviser. Instead, he sees his role as providing guardrails to keep the process from getting too ugly and to unite the party. When the nominee is clear, there is one potential exception. Back when Sanders seemed like more of a threat than he is now. Obama said privately that if Bernie were running away with the nomination, Obama would speak up to stop him. Asked about that. A spokesperson for Obama pointed out that Obama recently said he would support and campaign for whoever the democratic nominee is. If Bernie’s going to run away with it, I’m a step in and put a stop to it. So now we know why Barack Obama suddenly re-emerged. Now we understand why Barack Obama is out there telling us that all of these things that Bernie Sanders wants to do for the country just simply can’t happen and we need to just aim low, aim so low that even Joe Biden looks like a good candidate, I guess is what Obama wants to tell us. Now, here’s the thing. I don’t know if I’ve actually said this yet in a video that’s public. I think I’ve said it in a couple of the exclusive videos, but let me go ahead and say it now in case it’s not a hundred percent clear. I am backing Bernie Sanders for president of the United States. I am backing Bernie Sanders to become the democratic nominee. That is who I want. That is who I plan to vote for in the primary. Barring some weird thing happening before Florida starts to vote, that’s where I stand. Even if I didn’t support Bernie right now, what Obama has said, if true would still piss me off just as much because here’s what’s really at stake here with Obama. Here’s what he’s trying to tell us. It’s not that he thinks we need to curtail our expectations. It’s that he doesn’t want his legacy to be destroyed. See Obama, his entire presidency was a centrist. He always thought he could reach across the aisle and play nice with Republicans who continued to spread rumors that he wasn’t even born in the United States. He wanted to be their friend. He wanted to be everybody’s friend. He wanted everybody left and right and everything in between to love him. It didn’t work out that way. Lot of people on the left still do as a person. I think he’s a great human being. As a president. I think he was exceptionally middle of the road. Nothing great, nothing too bad. A couple of really good things, a couple of really bad things, so it all evens out to meh. That’s my thought on Obama’s presidency. I’m still angry about a lot of the things he did and I’m always going to be, but at the end of the day, he didn’t necessarily accomplish a whole hell of a lot. Yes, there was Obamacare, which in its early days would have given us a public option, which could have paved the way for Medicare for all. But he, along with the read over in the Senate and Pelosi over in the house, decided to water that down to let the industry come in and let their lobbyists get a crack at that bill. And that ruined it. Yes, it got a lot of people insurance. Yes, it left millions off. So that wasn’t good enough. So if you got somebody like Bernie Sanders coming into the white house and doing all these things that Obama tells us is not possible, suddenly nobody cares about Obama anymore. All of the things he did or didn’t do become irrelevant because now we have a new guy in there who came along and did really great things that Obama never could. And that’s what terrifies Obama. He is willing to sail us down the river just to preserve his own mediocre legacy. And that’s what these attacks are all about.