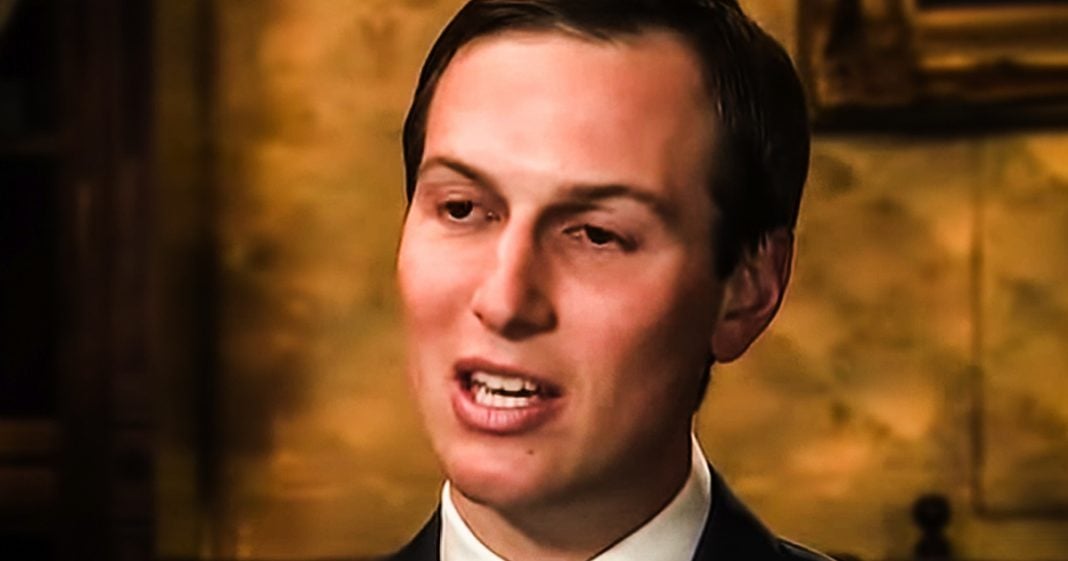 Donald Trump made the border wall a central part of his 2016 presidential campaign, and you can still hear the chants of “build the wall” at his campaign rallies today. But the fact that the wall has yet to be built is leaving a lot of diehard Trumpers angry, so the President has decided that he is now going to put Jared Kushner in charge of the project. This isn’t because he thinks Jared can handle it, its actually because he thinks the opposite. Ring of Fire’s Farron Cousins explains what’s happening.

*This transcript was generated by a third-party transcription software company, so please excuse any typos.
On Tuesday, Donald Trump tweeted out that, Hey folks, the border wall is totally being built, and he actually attacked Nancy Pelosi because Pelosi pointed out that the border walls not actually being built. He’s tearing down old pieces of border wall and he’s rebuilt some of those. So technically it’s not new areas of border wall, it’s replacement wall. And he said, no Pelosi, the border wall is being built. Okay, well what’s not? And that’s a good thing. It’s good that it’s not being rebuilt, but perhaps because he’s a little frustrated with the lack of progress overall in the border wall, Donald Trump has decided that he is going to put a new person in charge to be the point person on the border wall. And that person is a son-in-law, Jared Cushner. Because as we have pointed out multiple times, surely Jared Cushner is not going to screw something up. Trump wouldn’t put him in this position if he was going to screw it up. No. In fact, that is exactly why Trump is putting Jared Cushner in this position. Now we have learned over the years that Donald Trump is not happy with Jared Cushner. He’s not happy with his performance at the white house. He has wanted to fire him on multiple occasions, but obviously he can’t because he’s family and the nepotism thing, he can’t get rid of it. So what he’s doing is giving Jared Cushner an impossible task, which is to build the border wall. And when Jared Kushner is unable to deliver on this Trump campaign promise, Trump has a new fall guy. Trump can go to his voters and say, listen folks, we’re trying to build the wall. I got Jared Cushner running things, but Jared doesn’t have any, any, you know, experience with walls. Have you seen the reports from the apartment buildings he owns? They’re god awful guy, doesn’t even know how to build a wall, doesn’t even know what walls are. And Jared Cushner becomes the new scapegoat for why the wall hasn’t been built yet. Now this is a Herculean task. Cushner has until the end of next year to make sure that 450 new miles of wall are constructed essentially before the next election. In early November of next year, 450 miles with Jared Kushner is the foreman. That’s never going to happen. And again, Trump knows this. That’s why he’s given the dumbest person on his staff this task. So if the voters get angry, if the Trump supporters get angry, if Ann Coulter yells at him again, he can now just blame Jared Kushner because that’s what Donald Trump is best at. Shifting the blame. Now forget for the past three years, he’s done virtually nothing with the border wall except go down there and get a couple of photo ops. Forget for another second that for about the of 50 bucks at a Lowe’s, you can get the tools to get through his new state of the art border wall. Also, forget for a minute that they’re destroying the, uh, surveillance equipment that he’s put on these new areas of the border wall. So yeah, let’s pretend none of that is happening. We still will be witnessing one of the most spectacular failures of this administration now that Jared Cushner is the guy who is supposed to build that wall.