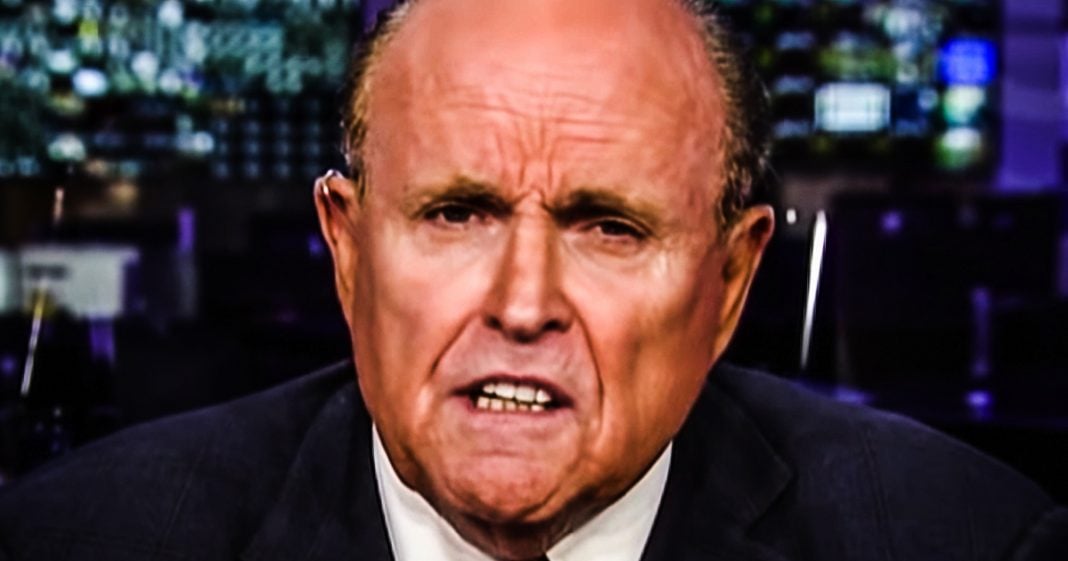 According to copies of subpoenas reviews by The Wall Street Journal, Rudy Giuliani could be looking at more than half a dozen criminal charges against him if the evidence turns up what prosecutors are looking for. The charges range from money laundering to obstruction of justice all the way up to conspiracy to defraud the United States. Here’s the bottom line: If you get involved with Trump, be prepared to have your life ruined. Ring of Fire’s Farron Cousins discusses this.

*This transcript was generated by a third-party transcription software company, so please excuse any typos.
There are basically at this point only two possible outcomes for people who work for or with Donald Trump. He’s either going to absolutely ruin your life or he’s going to, uh, behave inappropriately sexually towards you. Now we’ve seen plenty of evidence of the ladder, but what about the former that Donald Trump will ruin your life if you try to work with him? Well, I think for the best example of that, we just need to ask Rudy Giuliani, Rudy Giuliani right now, according to subpoenas viewed by the wall street journal, could be facing more than half a dozen criminal charges related to his work with the, uh, indicted Ukrainian Americans Lev Parness and Igor Fruman. Here are some of the charges that these subpoenas hint at. Obstruction of justice, money laundering, conspiracy to defraud the United States, making false statements to the federal government, serving as an agent of a foreign government without registering with the justice department, donating funds from foreign nationals, making contributions in the name of another person, or allowing someone else to use one’s name to make a contribution along with mail fraud and wire fraud. So that’s nine. That’s nine potential criminal charges that Rudy Giuliani might end up being hit with and every single one of these charges is related to his work for Donald Trump. Had Giuliani not gotten involved with this guy, he wouldn’t be facing any of this. He would still kind of be that obscure hero, like figure in some people’s eyes. The rest of us would still see him as a fraud, but we wouldn’t have to talk about him. We wouldn’t be devoting any time to the crimes of Rudy Giuliani because they simply wouldn’t exist. Donald Trump turned Rudy Giuliani from an incompetent mayor into a full blown criminal in the span of about two years. Folks, if you work with him, he will ruin your life. Giuliani may have had a ton of Goodwill following nine 11 and he did. He squandered it. He was a pretty crappy mayor prior to nine 11 and he went back to being horrible after it. He had his unsuccessful run for president of the United States. Didn’t even make it past the first couple of primaries and that would have been the end of the Giuliani story. Right, but he made the decision to come back to work for this guy because he thought he could get a little bit more out of it. He thought maybe his political career wasn’t over with. Maybe he could still become attorney general. Maybe he could still get a high ranking position in this administration as long as he just played ball as long as he did what Donald Trump wanted him to do, but instead of getting any of that, he is now facing possibly nine criminal charges against him that given his age would mean he would probably spend the rest of his life in a prison cell. All because he decided to work for Donald Trump. This should serve as a warning to everyone else in this Trump administration. He has no loyalty to you. He will ask you to do things that are illegal just like he has with Giuliani, just like he did with Don McGahn according to McGann’s own testimony, and he’ll eventually ask you to do the same thing too. He’ll ask you to either do the illegal thing or take the fall for the illegal thing that somebody else did. If you work with him, he is going to ruin your life to save his own. So I’ll end with this question to all the people who work for Donald Trump. Is it worth it?