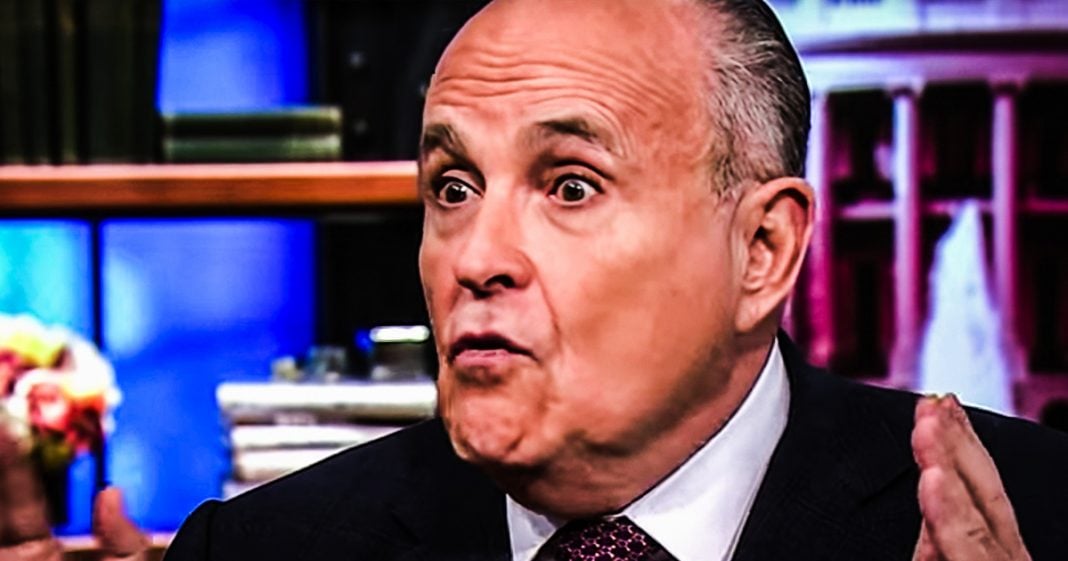 Rudy Giuliani is the biggest liability that Donald Trump has right now. Instead of working to prove Trump’s innocence in the Ukraine scandal, Giuliani is getting himself implicated in even more activity that could land him in prison. According to an indicted Ukrainian, Giuliani offered to help with his “legal problems” if he was willing to hand over dirt on Biden. Ring of Fire’s Farron Cousins explains these latest accusations against Giuliani.

*This transcript was generated by a third-party transcription software company, so please excuse any typos.
Donald Trump’s attorney, Rudy Giuliani may actually somehow have gotten himself involved in yet another quid pro quo scheme. Now, this scheme involves a Ukrainian energy tycoon by the name of Dimitra Firtash. Now, mr Firtash is the one who claims that Giuliani was involved in this scheme and here it is Firtash says that as a Ukrainian oligarchy living in Ukraine, he had gotten himself in a little bit of legal trouble and he was facing extradition here to the United States to face trial on charges brought by the us department of justice. Giuliani reached out to him according to his own account and Giuliani said, Hey listen, I can help you with your legal problems with the us department of justice if, if you are willing to give us some dirt on Joe Biden and here’s what I’m going to new Giuliani says, I’m going to send my two good buddies Lev partners and Igor Fruman over to meet with you and you can give them all the dirt that you have on Joe Biden. I’ll go talk to some folks that I know over at the US department of justice and see what we can do about the charges against you. And, uh, you know, we’ll all go from there. Well, mr Firtash then claims that he had no dirt on Joe Biden. He did meet with Parness and Fruman, but unfortunately he wasn’t able to, uh, give them anything. And so we don’t know if Giuliani ended up going to the department of justice and trying to smooth things out for mr Firtash or not. But we do know at least according to Firtash own account that he did in fact make that offer, which of course would be yet another quid pro quo. Is it illegal? Uh, we’ll find out. It certainly isn’t going to help Giuliani’s chances of not getting charged with criminal conspiracies, including failing to register as a foreign agent if he was in fact working with this, uh, Ukrainian energy tycoon to get dirt on one of his bosses, political rivals, that seems like something that’s probably going to be added to that failure to register as a foreign agent charge. But here’s the thing, again, Giuliani is still Donald Trump’s lawyer. He is the guy who at least as of this moment is heading up the legal team in charge of defending Trump from this entire Ukraine scandal. But Giuliani himself appears to be just as involved, if not more so in this scandal then Donald Trump, I don’t think Giuliani is going to be able to come out of this clean. I don’t think he’s going to be able to go and argue in front of a Senate trial that Donald Trump did nothing wrong when he has essentially been the middleman, the actual Hinch men in this entire thing. Now Firtash claims here have not necessarily been verified by anybody other than Firtash himself. But if in fact he did meet with Parness and Froman, um, they could corroborate this story and then things are going to look very bad for Rudy Giuliani. Parness as we know, as we have discussed, has been working diligently with, uh, members of the house intelligence committee turning over every single thing he’s ever had. He’s been working with the prosecutors. He wants to get a reduced sentence. So he’s turning over every single thing that he has, and if he is able to corroborate and provide evidence that he met with Firtash at Giuliani’s request, then I don’t think Giuliani, legally speaking, has a leg left to stand on. And at that point he’s probably gonna have to abandon Donald Trump to focus more on the criminal charges that he is now facing.