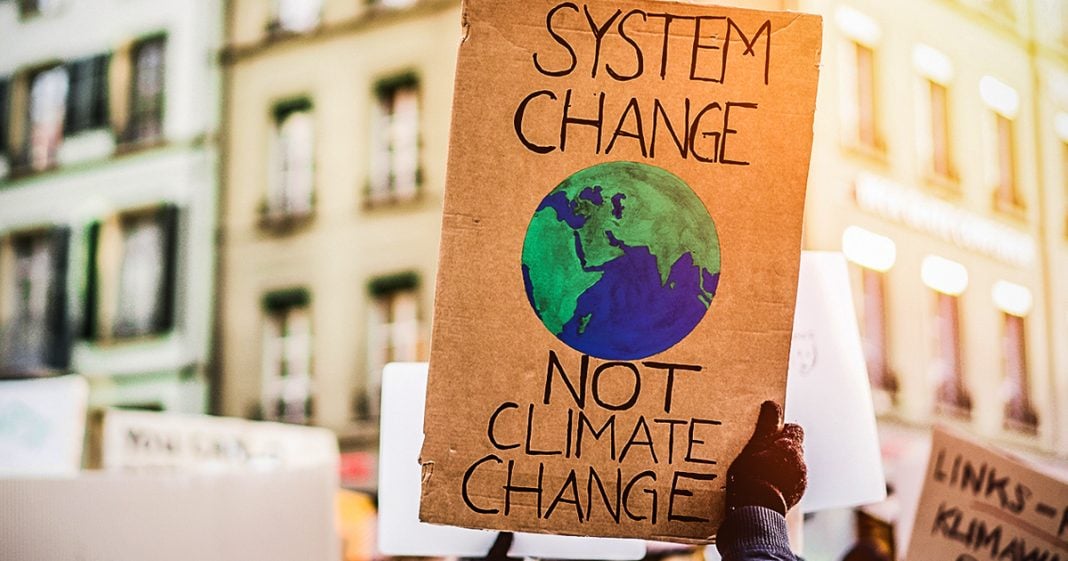 According to a major new poll by Pew Research Center, two-thirds of Republican voters in the United States now say that they are concerned about the fact that the government is not doing enough (or anything at all) to combat climate change and extreme weather events. This number is up from 53% a few years ago, showing that the evidence that is piling up all around is no longer a partisan issue among voters, even if it still is among politicians. Ring of Fire’s Farron Cousins discusses this.

*This transcript was generated by a third-party transcription software company, so please excuse any typos.
It’s not very often that we get to talk about good news here on ring of fire. Most of the things we cover are horrible things a Republican has said or done or a Democrat has said or done. So we kind of focus mostly on all the horribleness happening, but believe it or not, there is some positive happening in this country right now. And of course it’s happening far outside of Washington, DC but here it is according to the latest round of polling from the Pew research center, the number of Republicans in this country who believe not only that the federal government is not doing enough to combat climate change, but that we should be doing something to combat climate change has risen from 53% last year to 65% this year. So roughly two thirds of Republicans in this country now say that, yep, we’re not doing enough about this problem and we should be doing something that is a 12 point jump in the span of 12 months. That’s a positive. I know 65% two thirds still isn’t quite enough, but it does show that at least among voters here in the United States, the average people walking around the streets, climate change is not a partisan issue. They see the evidence piling up all around us, right? They see these wildfires sparked by the droughts out in California. We’ve seen fires in Colorado. We’ve seen the massive hurricanes. Luckily we were spared this year from anything too crazy with the exception of the one storm, but they see it and they understand it. They understand that summers are getting hotter, that we’re breaking all these heat records and more importantly, unlike some of the folks in DC, they understand that freak snowstorms in October don’t mean that climate change doesn’t exist, but actually confirm that these extreme weather events are getting more and more severe and climate change is to blame. Two thirds of moderate Republicans say that we’re not doing enough to combat climate change. That is a huge number considering not that long ago, majority of Republicans didn’t even believe that climate change was a threat. Now they do and they think we should be doing something. So again, the only place in this country where climate change is a partisan issue happens to be in Washington DC and the reason for that is because of the money coming from the people who are profiting off the crisis, the fossil fuel industry, the money they pump into politicians, most of whom are Republicans. But some Democrats get it too. That money is enough to make these people stupid. They’re not actually stupid, but they’re paid to be stupid. They’re paid enough money that they’re willing to go out there and make fools of themselves like Jim inhoff throwing a snowball on the floor of the Senate saying, here’s some snow. Climate change isn’t real. He did that because of the money, because the money’s too good. The money is so good that he knows he’s going to get ridiculed to hell and back for this, but he does it anyway because he doesn’t care. That’s what fossil fuel money buys in Washington DC but what they can’t buy anymore is ignorance among the American public. They understand what’s happening. They’re the ones living with the consequences of it, and hopefully they will take this new found acceptance of the climate science to the polls with them next November.