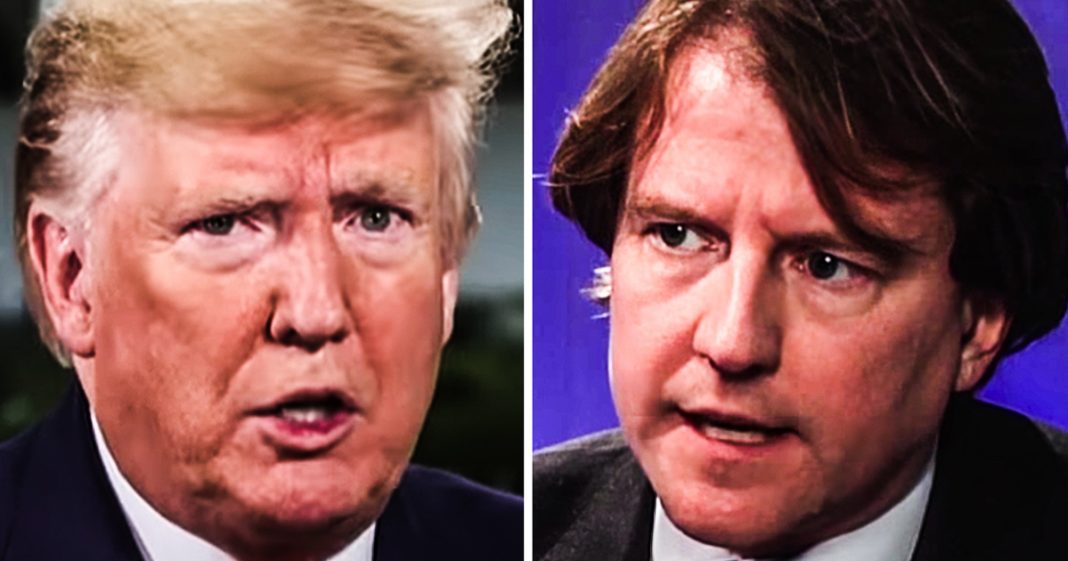 Former White House counsel Don McGahn has to comply with subpoenas from the House of Representatives, a federal judge has ruled. The judge smacked down the Trump administration’s argument that they had absolute immunity, and in the ruling proclaimed that “Presidents are not kings.” Ring of Fire’s Farron Cousins explains what this decision means and what will be the next move for the White House.

*This transcript was generated by a third-party transcription software company, so please excuse any typos.
When the second half of the Robert Mueller report came out, uh, there was a lot of information in there that said that at the time, the white house counselor Don McGahn had carried out a lot of orders that Donald Trump asked him to do, that McGann felt were either inappropriate or quite possibly illegal. And after finding that out from the Mueller report, Democrats in the house of representatives issued a subpoena for McGahn to come and testify to them and explain what exactly he meant by carrying out orders by the president that he felt were illegal. Donald Trump, of course, blocked McGann from going to testify. They said, Nope, we have immunity. We’re not going to let Don McGahn or anyone else from the white house, current or former go and testify in front of you. That was seven months ago that this happened. Well, yesterday, finally, a federal judge issued a ruling on this case and said, guess what, Donald Trump, you are not a King. That was in the ruling, by the way. And yes, Don McGahn, you can in fact go and testify. You still have all your legal rights when you testify, you know, we’re, we’re not taking away your rights, you know, to claim the fifth amendment, your freedom of speech, none of that. You still have all the legal rights a normal person would have, but you cannot ignore a subpoena. There is no such thing as blanket immunity and you’re going to go testify. I want to read this little snippet here from the actual ruling itself because it’s so damning against Donald Trump stated simply the primary takeaway from the past 250 years of recorded American history is that presidents are not Kings. This means that they do not have subjects bound by loyalty or blood whose destiny they’re entitled to control rather in this land of Liberty. It is indisputable that current and former employees of the white house work for the people of the United States and that they take an oath to protect and defend the constitution of the United States. Moreover, as citizens of the United States current and former senior level, presidential aides have constitutional rights including the right to free speech and they retain these rights even after they have transitioned back into private life. Meaning you’ve got your constitutional rights buddy, even though you’re no longer the white house counsel, but you can’t be prohibited from going and testifying in front of Congress. And again, this is related to what was said in the Muller report. So this is kind of old news. The hearing is not, or the ruling, excuse me, is not because it just came down yesterday, but this could have very serious ramifications for the current hearings happening in the house of representatives because Donald Trump has made same claim about the people. He is prohibited from testifying before Congress that he did back in the Mueller days. And that is, we’ve got blanket immunity. You can’t call my people to testify. They’ve been prohibiting people inside the white house from going in, speaking about the Ukraine scandal, just like they did about the Mueller report. And this judge says, Nope, not going to fly. That can’t happen. So of course the Trump administration is absolutely going to appeal this, but with any luck judges further down the line, possibly even the Supreme court may end up agreeing with this federal judge. Because after all, as we’ve sta said, if you give the white house blanket immunity, you also run the risk of giving the next democratic president because eventually we’ll have another one. They would also enjoy that same immunity, and that’s when it’s going to come back to bite those Republicans. So they’re not willing to take the chance right now to say that the white house is in fact above the law because they know eventually they’re not going to control the white house anymore.