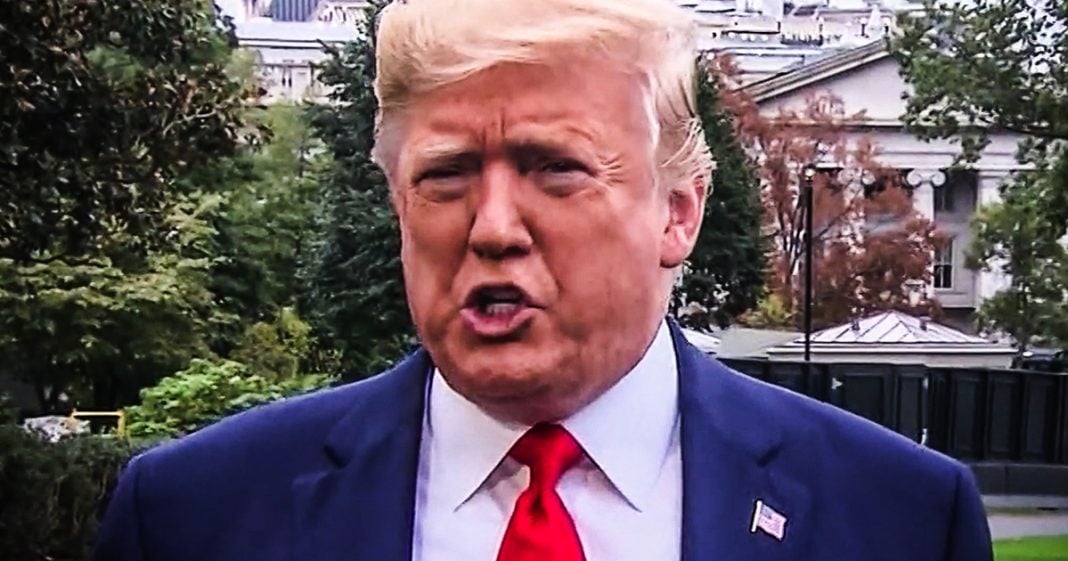 A White House review has revealed that a paper trail exists from Giuliani to Trump to Secretary of State Mike Pompeo with regards to the ongoing Ukraine scandal. The White House counsel’s office is not happy with this information because they deemed it “unflattering,” but that’s what happens when your entire administration is one giant criminal enterprise. Ring of Fire’s Farron Cousins discusses this.

*This transcript was generated by a third-party transcription software company, so please excuse any typos.
So the white house, uh, decided to do an official review of the withheld aid for Ukraine after Donald Trump decided, Hey, we’re not going to do this because we want them to announce an investigation in to Biden. And at the time it didn’t really sit well with a lot of people who worked inside the white house, people who worked at the state department, they didn’t understand what was happening and why it was happening. But then we got the whistleblower complaint and then we got the impeachment inquiry. So at that point, the white house says, okay, and Trump wasn’t involved in this by the way, but they say, we’re going to conduct a review. We’re going to find out why this aid was withheld. And they did the review. And unfortunately, according to the white house counsel’s office, what they found is quite unflattering for the president of the United States. And of course for Rudy Giuliani, because what they found is a chain of documents that not only go all the way up to Donald Trump and of course little Rudy Giuliani, they also go to Mick Mulvaney. They go to Mike Pompeo. Over at the state department. They tie in all the major players from the Trump administration as they all scrambled to create a reason. That this aid to Ukraine was withheld. So what does this mean? Right. Okay. The white house found their, their own documents showing that everybody was trying to come up with a decent reason to explain why they withheld the aid to Ukraine. And to me and probably to prosecutors and Democrats on the house intelligence committee and the average American, it looks like you knew exactly why you were withholding that aid, but you knew it wouldn’t play well with the public cause it might be borderline illegal. And so you had to come up with a new reason. If you had a legitimate reason, there wouldn’t be this email chain, this document chain connecting each and every one of you trying to create a reason, which is exactly what they were doing here. They were trying to create something that would play well with the public that would play well with the house of representatives and it failed. It backfired on them because now these documents are out there and they came from the white house themselves. They can’t deny these things. They’ll try. They will deny, but the evidence speaks for itself. There was one reason and one reason alone why that aid to Ukraine that was passed by Congress was withheld by Donald Trump, and that is he wanted them to announce that they were investigating Joe Biden. Now, they could have done that at any point. By the way, they could have asked Ukraine, about Joe Biden from one of their administration administration, excuse me. They could have done it. When Republicans controlled the house in the Senate for the first two years of his presidency, they could have investigated this. They could have done it themselves. They only did it that July 25th phone call a couple months after Biden announced he was running for president. They could have done it at any other time, but they only did it when they viewed Biden as a threat. And not only has it, Bach backfired on them because it’s, you know, sparked an impeachment inquiry, but it’s also backfired in the sense that Biden’s tanking in the polls, Democrats don’t even want Joe Biden, but unfortunately for this administration, they decided to go all in on this, to break the law, to dig up dirt on this guy. A guy that likely won’t make it past super Tuesday in the democratic primaries. So good job. Not only did you pick the wrong guy to attack because even Democrats don’t like him, but you might end up getting out of office early as a result of it.