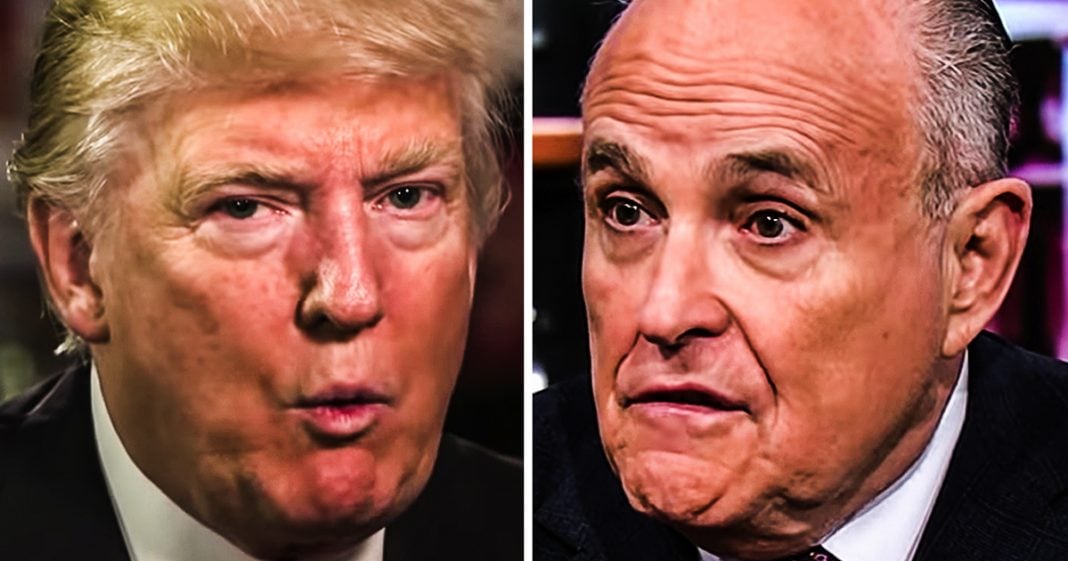 Lev Parnas has turned over audio and video recordings that allegedly show Donald Trump and Rudy Giuliani meeting with Mr. Parnas and his associate Igor Fruman, though what they are discussing in the tapes has not yet been revealed to the public. Parnas is burning down the entire Trump administration, likely because he’s trying to save his own skin. Ring of Fire’s Farron Cousins explains these latest developments.

*This transcript was generated by a third-party transcription software company, so please excuse any typos.
Love Parness is prepared to burn down the entire Trump administration and I absolutely love it. You know, we had talked earlier today about the fact that mr Parness has now revealed a information that Devin Nunez may have met with former Ukrainian prosecutor Victor Shoken in Vienna back in 2018 but that’s not the only bombshell that Parness and his attorney dropped over the weekend. According to reports, mr Parness, who through his attorney has said that they are going to cooperate fully with the subpoenas the house of representatives has sent them. They admitted that they have also sent audio recordings, video recordings, pictures, and of course plenty of documents to the house intelligence committee headed up by Democrat Adam Schiff. And in fact, they didn’t just do this. They did this a while back when they first got the subpoenas because as somebody who’s already facing criminal charges, mr Parness couldn’t afford to not fully comply with the subpoena, and it’s been reported that mr Parness is also kind of soured on both Donald Trump and Rudy Giuliani because they’re not exactly helping him, which is typical. We saw it during the Mueller investigation. Donald Trump rarely came out to actually defend his friends, including Michael Cohen and that made Cohen mad and Cohen came to Congress and spilled the beans and now mr Parness is facing the exact same situation and he’s saying, you know what? You’re not going to help me out after what I allegedly did for you. Oh, you pick the wrong guy to screw with because I’m going to give Congress everything I’ve got. I’m going to give them every recording of the conversations that we had. Oh, you didn’t know I was recording those. Oops. See, that to me is what’s interesting here. Right? Why does this guy just have all these audio recordings of these conversations? Why does he have video recordings of them? Because that’s how these criminal syndicates work. They know eventually they’re going to need those tapes. They’re going to need those tapes to either blackmail somebody or to save their own hides. That to me is I pretty much, I think what’s happening here, partisan knows what he’s doing. He’s been involved in this stuff. It seems like for quite some time based on the charges against him and he knows to keep the receipts and he kept the receipts and now Adam Schiff has those receipts. The only downside to this story is that we don’t know what those receipts say. We don’t know what the audio recordings are of, we don’t know what the video recordings are of, we don’t know what the photographs are of, we don’t know what the documents contain, but we know that they from Love Parness and we know that the Democrats on the house intelligence committee have them. As I have repeatedly said this impeachment inquiry is going to get so much worse. I mean look at how far we have come and just the past few weeks since Pelosi announced that she was going to Greenlight this, it went from a random anonymous whistleblower complaint that Trump is still harping on for some reason to quite literally everyone who was involved in this now coming out and saying, yes, there was a quid pro quo Republicans to their credit haven’t changed their tune. They still say there is no quid pro quo. They still say this is some kind of deep state coup against the president. Even though the witnesses who testified publicly over the last week or two have all said, yeah, there was a quid pro quo, but now you’ve got a guy at the heart of it love Parness who is currently under house arrest in the state of Florida and I hope they have some kind of protective custody, uh, situation happening there because left Parness is starting to spill all the beans and I don’t think that’s going to make Donald Trump happy. I don’t think that’s going to make Rudy Giuliani happy. And I’m terrified that we’re going to be looking at another one of those Jeffrey Epstein situations with mr Parness. So I’m hoping that they’re keeping a very close eye on him and protecting him as best they can because as this progresses, I think Parness is going to end up being the guy who hands over the information that finally implicates not just everyone in the Trump administration, but other members of Congress too. And it may not result in Trump getting removed from office, but hopefully the information that he has turned over and that he will testify to when he goes before Congress, which he will, hopefully that’s enough to change public opinion and not just vote Trump out of office, but vote a couple other Republicans out along the way.