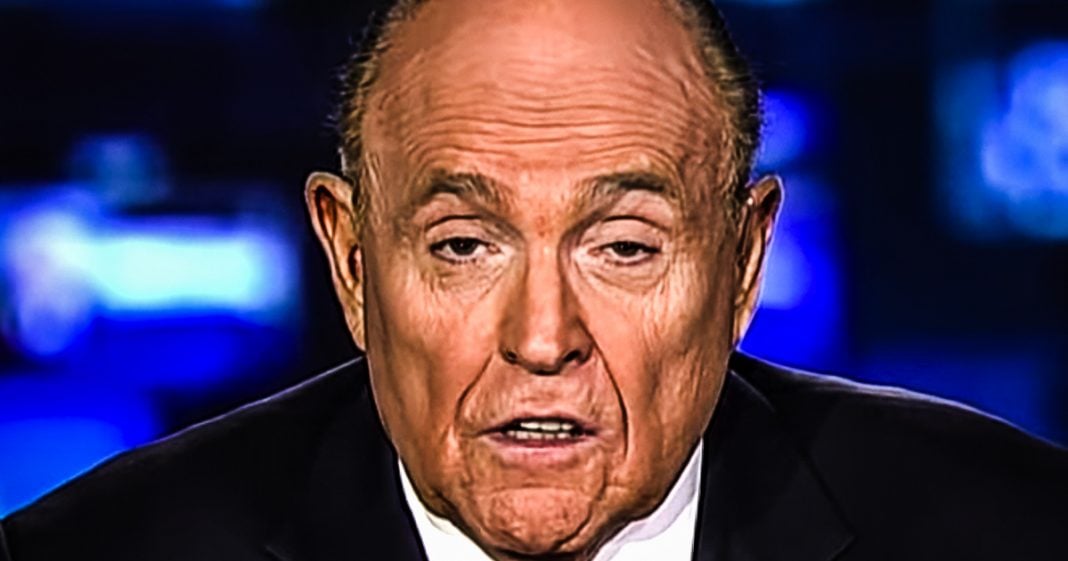 On Saturday, Rudy Giuliani claimed that he had an entire safe FULL of damaging evidence against the entire Biden family, and that if he somehow mysteriously disappears that this information would then “appear” for the public to see. Giuliani has clearly gone insane, because if he had this information it would have already been released. Ring of Fire’s Farron Cousins discusses this.

*This transcript was generated by a third-party transcription software company, so please excuse any typos.
On Saturday. Donald Trump’s attorney, Rudy Giuliani, once again mentioned his insurance policy that he has in case Donald Trump decides to throw him under the bus. But the insurance policy that Giuliani claimed on Twitter he possesses is not actually against Donald Trump. Here is what Giuliani tweeted out early on Saturday morning. He said, truth alert. The statement I’ve made several times of having an insurance policy if thrown under the bus, is sarcastic and relates to the files in my safe about the Biden families four decades monetizing of his office. If I disappear, it will appear immediately along with my Rico chart. And again, that was a truth alert from Rudy Giuliani, Donald Trump’s attorney. And so he says he’s sarcastic about having an insurance policy. And then he says, I totally have an insurance policy that contains 40 years worth of dirt on Joe Biden. In fact, Biden family, he says, um, 40 years worth of dirt on them and how they’ve monetized his office. Um, no you don’t, Rudy, you don’t have this. I’m willing to bet you probably don’t even have a safe. And here’s how I know that you don’t have this, because with everything that’s going on right now with with the crimes, you yourself are being investigated for the president’s undergoing an impeachment. If you had this information, you would have released it. It would be the front page of every newspaper in the United States. It would get wall to wall coverage on cable news. If such information existed and you were the one who possessed it, because if it existed, buddy, it would clear your client, right? It would clear him and you’re not releasing it. What are you saving it for? The Senate trial if it goes there for impeachment, that that’s not how this works. You could end it today by releasing this, but here’s another thing I love about this whole story. I love the fact that these Republicans think we all love Joe Biden. I know Joe Biden’s still polling pretty well among Democrats across the country, but who are these people? I don’t see them. I don’t see them on Twitter and I follow some of the most conservative Progressive’s, Democrat liberals, whatever out there, and even they don’t like Joe Biden. Nobody likes Joe Biden. If you want to take them down, fricking take ’em down, man, we don’t care. You’re doing our work for us. We don’t want them to be the nominee either. So trust me, if you have this dirt, literally everyone in this country would want you to release it because it would mean that Democrats don’t have to have Biden as the nominee, and it would mean Republican’s got to be right. That Biden was corrupt. Everybody wins. Giuliani, you could be the hero. The problem is it doesn’t exist because as much as I dislike the thought of Joe Biden being the democratic nominee, because he is very weak. he hasn’t committed a crime. Neither is his son, and we can dislike people, but still admit those hard truths about them, and that is that they’re not criminals. You on the other hand, mr Giuliani, maybe you ought to stop tweeting out lies and conspiracy theories and start working on your own defense because as I mentioned at the beginning of this, you, unlike Joe and Hunter Biden are actually under a criminal investigation right now.