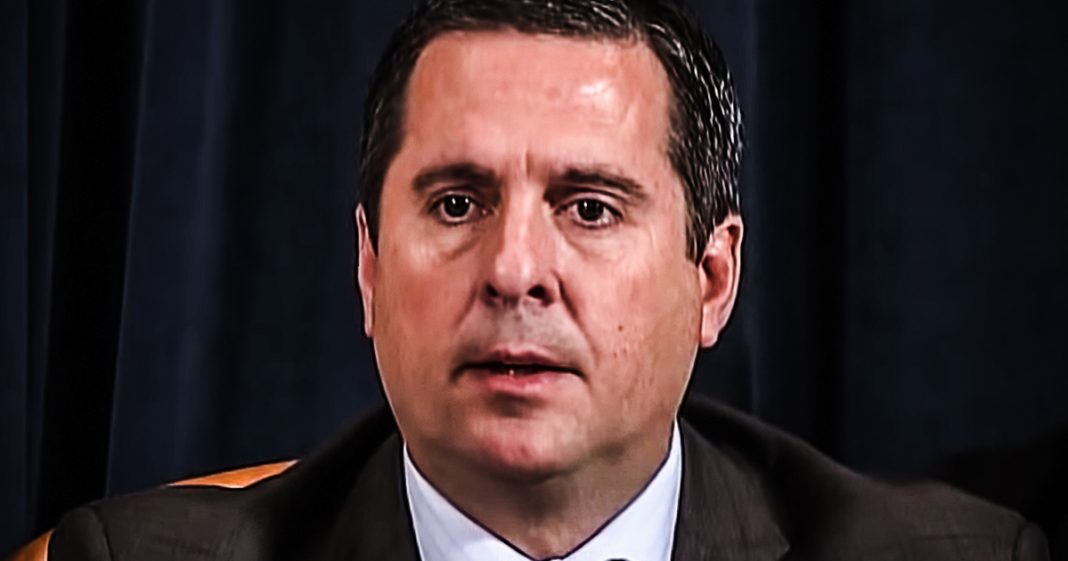 Lev Parnas, the indicted friend of Rudy Giuliani, has now implicated Republican Representative Devin Nunes in the Ukraine scheme, saying through his lawyer that Nunes flew to Vienna to meet with a player in the scandal to dig up dirt on Joe Biden. We’re now left wondering just how deep this scandal could go, and how many more members of the Republican Party might be a part of it. Ring of Fire’s Farron Cousins explains these latest developments.

*This transcript was generated by a third-party transcription software company, so please excuse any typos.
Well folks, this was quite an exciting weekend of uh, developments that happened. Uh, I guess the biggest thing that happened over the last couple of days is the fact that Devin Nunez is now pretty much directly implicated in this entire Ukraine scandal. And here’s how all of that unfolded. You had Joseph Bondi who is the attorney for Love Parness one of the, uh, Ukrainian born Americans who was indicted. Good friend of Rudy Giuliani. He was indicted along with his friend Igor Fruman and according to Parness, his lawyer Bondi Devin Nunez year ago, went over to Vienna, brought three staff members with him and met with former Ukrainian prosecutor Victor Shoken. And Shoken is the one who Biden and Republicans in Congress and the United nations and countries from all over the world wanted to get rid of in 2016. That was Shoken. They got rid of him. So Nunez decides to go over and meet with Shoken in 2018 in Vienna to get dirt on Joe Biden again, that is acording to love Parness through his attorney Joseph Bondi. Now Nunez. Once this story broke, immediately came out and said, this is untrue, and suggested that he is actually going to Sue CNN for publishing this story. Now, I imagined Devin Nunez, who is very quick to Sue people, including the cow that’s pretending to be one of his cows on Twitter. I assume this lawsuit is probably never actually going to get filed because if it did, it would be up to Nunez with the way slander and libel laws are written here in the United States. Nunez would have to prove that what CNN said was false. Not CNN prove that it’s true. Nunez would have to prove that it is false. So in order to do that, Nunez would have to turn over all communications. He would have to give up all of his emails, all of his phone records, all of his text messages, absolutely every single thing about his time in Vienna to prove that he never met with Victor Shoken. And I don’t think that that’s possible. And I don’t think Devin Nunez thinks that’s possible. So here’s where we’re at right now. Again Nunez in Vienna and by the way spent $57,000 in taxpayer money to go over there to Vienna to meet with Victor Shoken love Parness says that he had been communicating directly with Devin Nunez in order to put him in touch with Shoken so you’ve got that connection and Love Parness right now folks, he’s a guy that has everything to gain from telling the truth, right? He is facing some pretty serious charges that could land him in prison for a couple years and so he is trying do everything humanly possible to save his own skin. Now Parness has been outspoken. Igor Fruman on the other hand has been relatively quiet. We’re not hearing much from him, but Parness seems like the kind of guy who wants to get out of a prison sentence and so he is singing like a bird right now and he has managed with the information he has turned over and the information his lawyer has revealed to implicate countless members of the Trump administration itself and now it’s sneaking into the house of representatives where he has now implicated Devin Nunez. If this story is true, if Nunez was over there working to get dirt on Joe Biden, that would also therefore indicate that Nunez was working for Donald Trump and Rudy Giuliani. It’s highly doubtful that a guy like Nunez who is very close to Donald Trump has been his, uh, kind of go between between the white house and Congress. It would be very unlikely that Nunez just happened to be doing this all on his own. At the same time that Rudy Giuliani was over there trying to make this happen because Giuliani himself has admitted that he met with Parness and Shoken and all these same characters who Nunez is now accused of meeting with this story. You know, we, we, we talk about this, we hear this, we read about it and we think, okay, this is the big one. This is the big one. Here’s the thing with this. This is clearly still in its infancy. We do not know everything. We don’t even know everything about what we think we do know. Yet there is a lot more still to be revealed. There are likely a lot more players that are going to be implicated in this. So everybody, let’s take a step back. Let’s not think that, Oh, this is the smoking gun. Oh, Nunez is going down and this is going to be the end of it. No, it’s going to get much worse for a lot of people connected to Donald Trump. So stay, stay paying attention to this because things are going to get a lot crazier as this thing continues to drag on. And again, I don’t think this thing is in the middle at this point. I think we are still in the infancy of this impeachment inquiry, and again, going to get so much worse for so many people that latched on to Donald Trump.