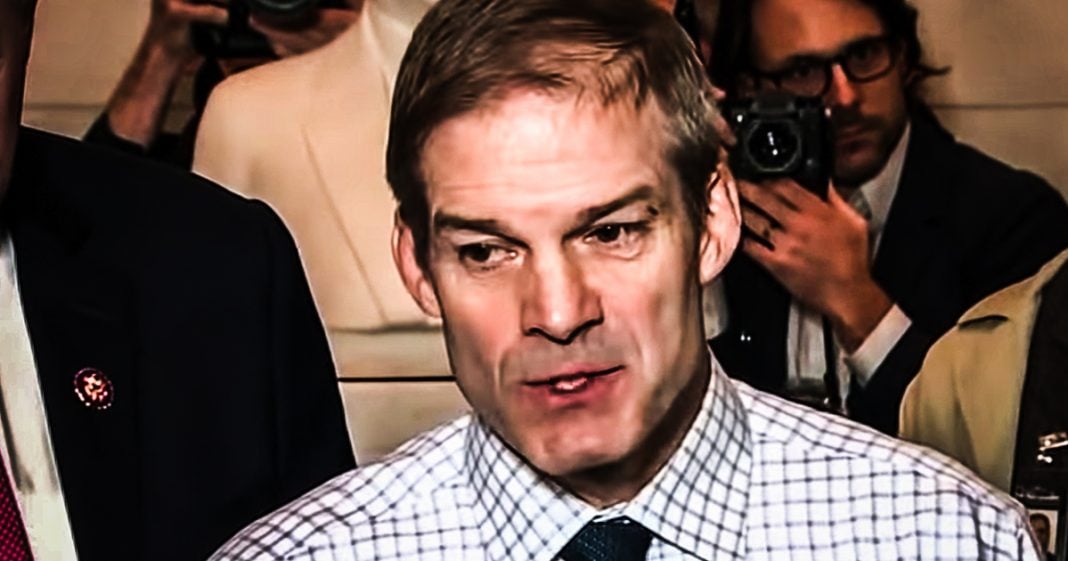 The Cleveland Plains Dealer has published a scathing op-ed attacking Republican Representative Jim Jordan for his disgusting behavior both in Congress and throughout his life. The Plains Dealer is the paper for Jordan’s district, and this attack might end up resonating with the voters he will soon have to go home and face. Ring of Fire’s Farron Cousins explains why this is a pretty big deal.

*This transcript was generated by a third-party transcription software company, so please excuse any typos.
The plain dealer, a newspaper in Cleveland, Ohio this past Thursday published a scathing op-ed attacking Republican representative Jim Jordan, who also happens to represent part of the area where the plain dealer is one of the most popular newspapers out there. And here is what this op-ed had to say about mr Jim Jordan. There was no good reason to punish greater Cleveland by making the person who is now the second most contemptible human being in the entire US government, part of the region’s delegation to Congress. Everything about Jordan reeks of a man willing to cast aside common decency and fairness in service of a corrupting cruel president. He may be the most unfit man to ever represent part of greater Cleveland in Congress. And that’s only part of what people who live in Jim Jordan’s district had to say about Jim Jordan. They also in the op ed mentioned the fact that, uh, the only reason Jordan’s even in Congress right now is because back in 2012 they had to redraw the districts and they gerrymandered the heck out of that one that Jordan currently represents. It is now a sickle shaped district, much like Dan Crenshaw’s district down in Texas. By the way, it’s just weirdly shaped going all which ways into areas that ought not be going. But because of that, they drew it in a way to kind of scoop up all these little areas of Republican’s all over the map, put them in a single district and this is what you get Jim Jordan. But of course the paper did not only focus on the fact that Jordan is pedaling conspiracy theories during his time questioning in Congress during the impeachment inquiry. They also talked about the fact that you know, the guy’s now named in a lawsuit for ignoring sexual assault at Ohio state university and that’s really the big one, right? We know that Jim Jordan’s a nut job when he gets on the floor of Congress. But we also know because of these lawsuits, because of the people who’ve come forward and said what Jordan did when he was an assistant wrestling coach at Ohio state, that he’s also a scumbag. Cause you’d have to be right when you have these young men on your wrestling team, your in charge of their safety and their protection, you are in a mentor role for them, not just a coach. You’re somebody. They look up to somebody they trusted and they came to you and they said, this is happening, this is bad, this is assault. And Jordan laughed it off. He laughed it off. He could’ve stopped it. He could’ve prevented dozens of, of more young men from being assaulted, molested or harassed by this Dr. Richard Strauss. But he didn’t do it. And that makes him a scumbag. But that is what Jim Jordan has always been. And why the Ohio state state story is so important because not only is it important because we have to listen to the survivors and we have to believe them. And we have to get them justice, but it also shows the, Jim Jordan’s always been this way. Jim Jordan did not suddenly become crazy when he got on the floor of Congress. Jim Jordan has always been a scumbag and will always be a scumbag, but I also find it interesting that the two top Republican attack dogs in Congress fighting against this impeachment inquiry are Jim Jordan, the guy who ignored all of these sexual assault complaints coming from his own wrestlers, and the other one is Devin Nunez who is now directly implicated in this Ukraine scandal and is facing an investigation himself. Those are the two people that Republicans have picked to lead their party. So I ask you if you’re a card carrying Republican, if you’re somebody who says, heck yeah, the conservative party of the United States represents me, then you need to take a look at those two people who are kind of running the show right now and ask yourselves, are these the people I want being the face of my party? Would I be comfortable leaving my kids with these people? Would I trust them with my ATM pin code? The answer to every one of those questions should be no, but I’m willing to bet there’s plenty of Republicans out there who would still say, heck yeah, Jim Jordan. Let me know when you’re free to come babysit my kids.