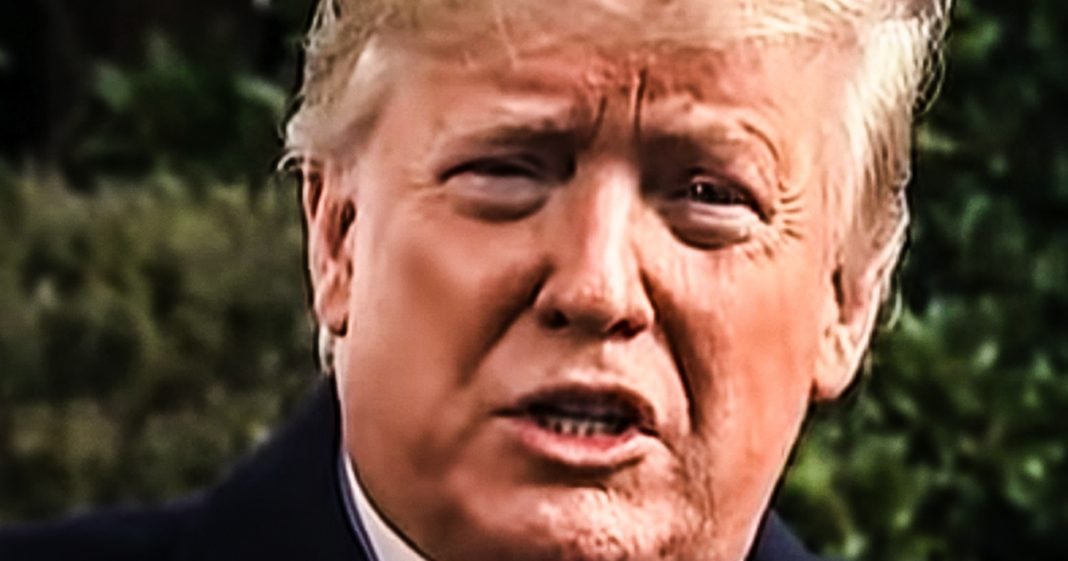 According to a new report by Politico, Donald Trump’s moods are suffering from wild swings as the impeachment hearings drag on, and this is coming from people inside the White House. But not only is Trump losing his mind, even the staffers are getting into it as they watch Trump’s inner circle get dragged into the fray. The White House is in chaos mode once again, as Ring of Fire’s Farron Cousins explains.

So let’s be real clear about one thing. Now that this week’s impeachment hearings have ended. It was a very bad week for Donald Trump and quite literally everybody else in that entire white house. Now, earlier this week, Politico, and this was after the Sonland testimony where he immediately said, Oh heck yeah. There was a quid pro quo. Politico spoke to people inside the white house. I spoke to Donald Trump aids and staffers, and what they said is what it was pretty much predictable, and that is Donald Trump’s emotions right now. His moods are essentially a roller coaster. He goes from these massive highs to these massive lows with a lot of anger in between because of what’s being said during those impeachment hearings. Trump knows that it’s going bad for him, but the thing is, these white house staffers say he’s not sure yet if it has swayed public opinion. So that’s what occasionally puts him in a good mood according to these staffers.

But aside from that, it’s generally a feeling of hell. Everybody in there is living in absolute complete misery. And again, it’s not just Donald Trump, it’s everybody in that white house cause this pill, a political reported. A lot of these staffers were actually furious after Sonland’s testimony when he roped in Pence and Mulvaney and Rick Perry and a lot of other people from this administration, they were furious because they see what the rest of the public sees. Right now Donald Trump’s entire inner circle is falling apart. Everybody the guy is associated himself with is now being roped into this scanner up to an including the vice president himself. And that’s bad news for this administration. And I think that’s what’s causing some of the foul mood among the staffers. Right? They know they weren’t a part of this.

They’ve got nothing to lose except of course their jobs, their future job prospects. Right. Because think about it this way, if you’re just, you know, I don’t want to insult anybody by saying it this way, but if you were a low level staffer in the white house, that is an awesome thing to have on your resume. Unless, of course you have to put on there that you worked for Donald Trump and then Donald Trump gets impeached and then God willing gets removed from office, which will never happen. That’s then on your resume, they’re going to ask, even if you try to leave off the name of, well, which administration did you work in? Yeah. [inaudible] no, so these people are furious because they thought they had landed the gig of a lifetime.

Somebody that was going to open doors for them, and even as horrible as Trump is, and as much as they stood by his side, when he goes out there and says these horrible things and enacts these horrible policies, they still thought, if I stay here long enough, if I do this right, I can get a better job later on down the line, right? I’m going to work in politics. This has always been my dream. This guy sucks, but I’m going to stick it out because it’s going to help me now suddenly it’s not looking like this. So the staffers get angry. The staffers are miserable, the inner circles miserable. Donald Trump is miserable. And once again, just like in the, uh, hottest days of the Mueller investigation, the white house has descended into utter and complete chaos.