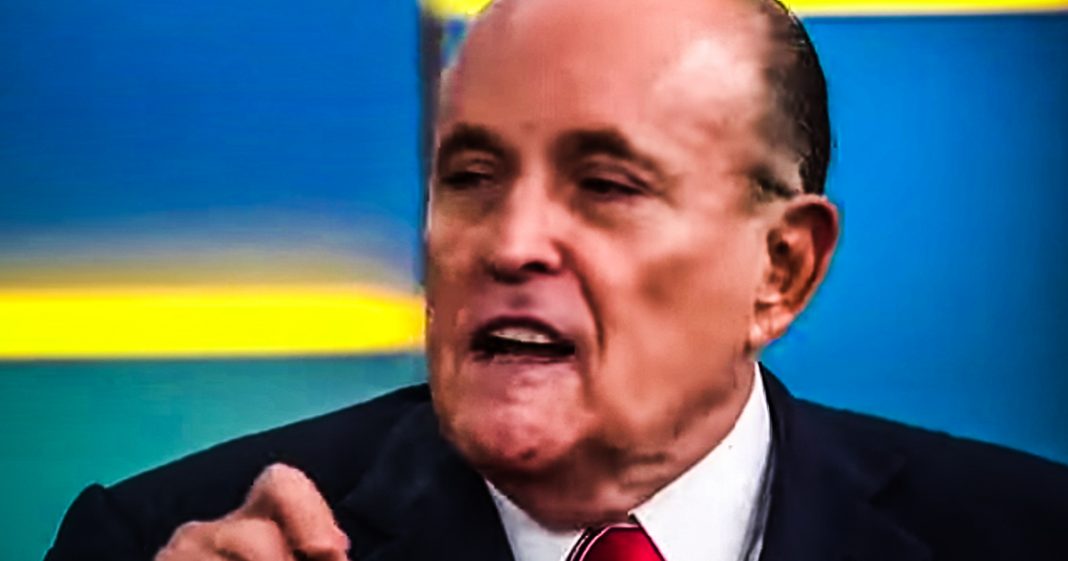 As a former prosecutor, Rudy Giuliani should know that when you are under investigation for possibly doing crimes you should probably not do more crimes while the investigation is going on. Yet that is exactly what Giuliani admitted to doing in an interview with The Blaze this week. He told Glenn Beck that he is STILL in contact with officials from Ukraine and they are working to get more dirt on Joe Biden. Ring of Fire’s Farron Cousins discusses this.

You know, one of the weirdest things about Rudy Giuliani that we often forget because of what a bumbling moron he is today is the fact that this guy used to be a federal prosecutor. I mean this guy was a us attorney. He knew at least at the time, I think probably at least to a little bit, uh, knew the law, knew how to do things. He prosecuted people. He put people in jail for doing crimes. So you would think out of all the people in this planet, Giuliani would be among the top tier who understands that when you’re being investigated for committing crimes, that’s probably the best time to stop committing the crimes. But Giuliani admitted during an, during an interview with Glenn Beck on blaze TV earlier this week.

In fact, it was actually the same day that Gordon Sonland threw him and Trump and Mulvaney and Palmpeo and Rick Perry and bill Barr under the bus that same day. Giuliani goes on blaze TV and admits, yeah, I’m still working with the Ukraine to dig up dirt on Joe Biden. In fact, Giuliani said in that interview, I was in contact with two of them today that very day, the day that Gordon Sonland threw Giuliani under the bus, the day after Volker threw Giuliani under the bus and Lieutenant Colonel Veneman and Ivanavitch and everybody else who’s testified threw him under the bus and Giuliani after all that and says, I’m still doing it. I just talked to them. I may make a call to them after I finished talking to you, Glen How dumb can one human being be?

Seriously, you are under criminal investigation, Rudy, for potentially failing to register as a foreign agent and here you are admitting to working with members of a foreign government because he says he’s talking to a people from parliament in the Ukraine trying to dig up dirt on the political rival of your boss, Donald Trump because he is still paying you to be his lawyer or you say you’re doing it for free, whatever. He’s hired you so you work for him. you, you, I swear to God, I don’t have the words because I don’t know how many words to use to describe how stupid this action is by Rudy Giuliani, but it’s like I said, it’s like I’ve said a hundred times over. Every time Giuliani gets in front of a camera or gets a microphone in front of his face, he makes things so much worse for Donald Trump except for this time. It’s not necessarily just making things worse for Donald Trump because Giuliani has own legal problems.

He has to worry about he is being investigated for potential criminal activity in New York, and I guarantee you now this blaze TV interview with Glenn Beck is going to be entered into evidence because you choose frickin admitted it. Dude, you cannot. If you’re being investigated for potentially failing to register as a foreign agent, admit that you’re still working with the foreign government. To undermine American elections, bud. I mean, that should be day one law school stuff. Oh by the way, if you ever under criminal investigation, stopped doing crimes or at the very least stop admitting to doing crimes, maybe law school’s changed a little bit since you were there. Rudy, I don’t know.

All I know is this, I want you to keep talking what you want to do, as many interviews as possible. If you want to come on ring of fire, I will let you come on. I will throw you the easiest softball questions you can imagine and I’m just going to let you roll with it. That is an open invitation. I don’t care if you want to do it at 2:00 AM I will come in here and I will make it happen cause I want you to keep talking because every time you open your mouth, you either implicate yourself at this point or Donald Trump in further criminal activity and I can’t seem to get enough of it.