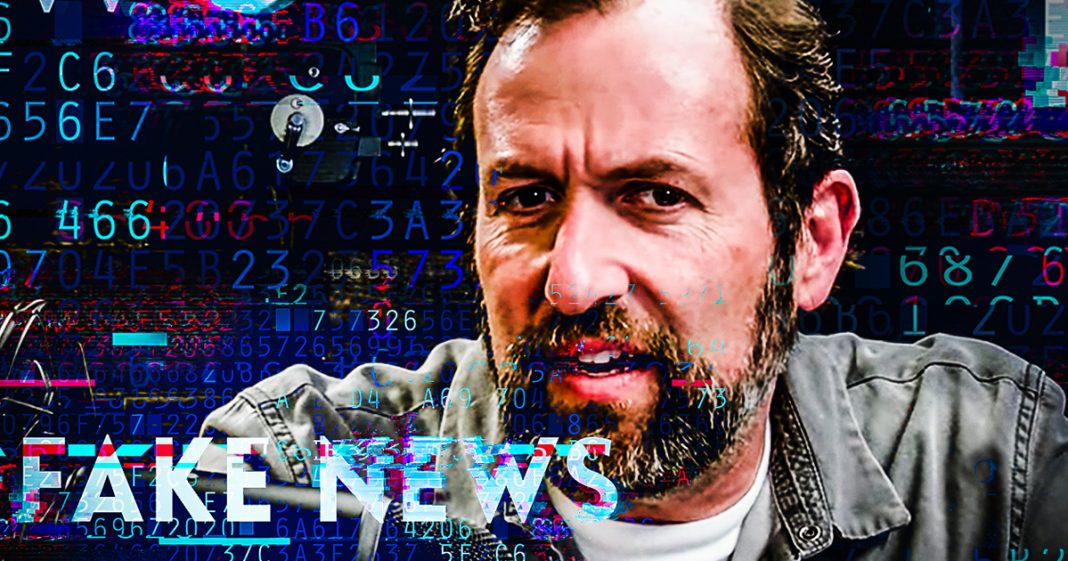 According to an explosive new report from The New York Times, a former Fox News executive named Ken LaCorte has been running a fake news “farm” in Macedonia, where he is paying locals to churn out fake news that damages Democrats since the 2016 election. LaCorte swears that he wants to be a legit news producers, but the sites that he runs are hyper-focused on partisan lies because that’s what he says the public wants. Ring of Fire’s Farron Cousins discusses this.

According to a bombshell, new exposa by the New York times, a former Fox news executive and has been busted running a fake news farm out of Macedonia. Now this former Fox news executive man by the name of Ken lacourt has been running this fake news farm in Macedonia since the 2016 presidential election where he was having all of these Macedonians in this town called Valets, churn out these articles, conspiracy theories, propaganda, all kinds of horrible things including the pizza gate conspiracy. And then he would share it on a host of different websites that he’s running, none of which were really big, but all of them together added up, running similar stories, made the story seem a lot bigger than they were. And then of course these were shared on social media. They were shared by other conservatives and that’s how they grew legs. And mr Ken lacourt over there in Mesadonia has been doing this for three years. And when I opened up I said he got busted doing this.

Lacourt was not actually busted. It’s not like we caught him. You’re, you’re busted hands on the ground, no. This dude admits it and he’s still doing it. And in fact, the New York times spoke to them again. This was an exposa they interviewed him, he’s happy, he’s loving what he’s doing because unfortunately nothing that he’s doing is illegal. It is perfectly legal in this country to go out there or go to a different country, even hire a bunch of foreigners to write conspiracy theories about United States politicians. Basically only those on the left though, and then promote it throughout the United States in an attempt to interfere with our election. That’s actually legal. And mr lacourt thinks that he can make this into a booming media empire and that’s why he’s doing it. And that’s what he told the New York times. Here’s, so here’s some quotes from him. Well, first of all, he claims that he’s creating sinner, right content. He says, I wanted to try to find middle ground. Unfortunately, the things that work best right now are hyperactive politics. On one hand, that’s at odds with what I want to do. But you can be more successful by playing the edgy clickbait game. And that’s exactly what mr lacourt, a former Fox news executive is doing, except that it’s not just clickbait, right?

The Hill runs clickbait. Lot of folks on YouTube run clickbait, and I’m going to go ahead and admit some day we do too because we’re fighting for those clicks. But that doesn’t mean what we’re saying is not true sometimes. Yeah. We all have to make our headlines a little more sensational than the story actually is. But a click bait title is not the same as fake news. Fake news is when you write something that’s completely fabricated that doesn’t make any sense or that is an outright conspiracy theory, that’s fake clickbait is just a slightly misleading or over sensationalized headline while the material inside could still be factually accurate. And again, yeah, even we have fallen into that trap every now and then. But what this guy is doing is poisoning the well of public discourse here in the United States and he’s doing it to attack Democrats and to promote corrupt Republicans. Oh, it’s not what I want to do, but it’s what makes me a lot of money. Bull. I call bull. Mr. lacourt, this is what you want to do because after you’ve been doing it for at least at this 3 years now and you’re like, wow, it’s not what I know it is what you want to do now that that’s what you’ve become. That’s what you are now. When you continuously do something for over three years, guess what?

That’s part of who you are as a human being and that’s what mr LaCourt is. And again, unfortunately totally legal. Literally nothing we can do about it except get on here and fight back against the misinformation. And I’m afraid that’s not enough. Even with all of these other progressive voices out there to fighting back against misinformation, it’s not enough because we are not as well funded as those on the rights a right who are putting out this fake news. We are not as organized, we are not as cohesive how we fight with each other just as much as we fight with a right and that has to stop. That has to stop because if we’re going to fight back against this and we’ve got, you know, 12 really difficult months coming up, then we have all got to get together. I don’t care if we like each other. I don’t care if we disagree with each other. It’s time to put all that crap aside, come together and fight back against the disgusting fake news coming from the right.